The seabirds of Hermaness

In today’s guest blog, former warden Mike Pennington reflects on a long association with Hermaness National Nature Reserve, the changes he has observed over the years and the impact of the coronavirus lockdown on this special place.

I first came to Hermaness National Nature Reserve, on Britain’s most northerly island of Unst in Shetland, as seasonal warden in 1988. A 30-year teaching career at the local school followed, before early retirement saw me back at Hermaness, undertaking the annual seabird monitoring contract.

As an Unst resident, I have of course visited many times in between, but the contrasts between the two spells on the reserve have been interesting. The blanket bog is thriving. There are now fewer sheep, thanks to an agreement with the grazing committee, and species like bogbean and great woodrush now bloom regularly, while the plastic boardwalk to the clifftop has replaced the old short wooden sections and has had a remarkable impact in reducing erosion.

On the cliffs, the fortunes of the seabirds have been more mixed for complex reasons. Changes in food availability are key, due to overfishing or, more importantly, climate change warming the seas and changing the ecology. The monitored guillemot plots only hold about 10% of the maximum counts from the late 1970s, and my favourite spot for puffin-watching in the 1980s, at Sothers Geo, is usually all but deserted. The gannets continue to thrive, however, and several further stacks have been colonised over the last few decades. There is still little more thrilling than arriving on the top of the Neap to the sight, the curiously mechanical, throbbing sound, and the distinctly fishy smell of the southern part of the gannetry. 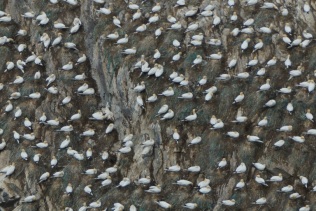 One of the biggest changes has been the increase in visitors. In 1988, I could sit watching my favourite puffins for hours and only a few people would go past. In the last few years, there has been a stream of people heading up and down the boardwalk all day, even in the evenings, when in the past you could have watched the sunset in glorious isolation.

In 2020, of course, the lockdown meant that very few people could visit the reserve at all until late May, and seabird monitoring only got underway in June, as restrictions eased. With inter-island travel within Shetland and ferry and air travel to and from the islands still restricted through June, it has been possible to spend the whole day on the reserve without seeing anyone, although it was lovely to see eight car loads of island residents enjoying the reserve on the first sunny Sunday at the end of May when the lockdown rules changed.

The wildlife has responded to the changes as well. The boardwalk has been a great success in channelling people into one route, but it also created an area which was constantly disturbed, so the birds either became habituated or moved away. This year, though, I have almost stood on a snipe sat motionless beside the path, seen dunlin chicks within metres of the boardwalk and had the novelty of being dive-bombed by angry bonxies (the local name for great skuas). Normally, bonxies beside the boardwalk become so bored with the sight of visitors that they completely ignore them. 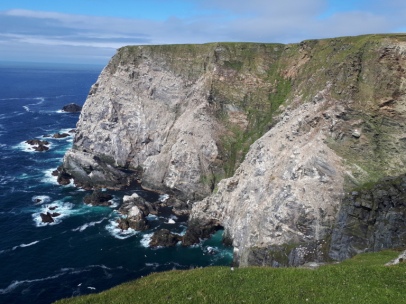 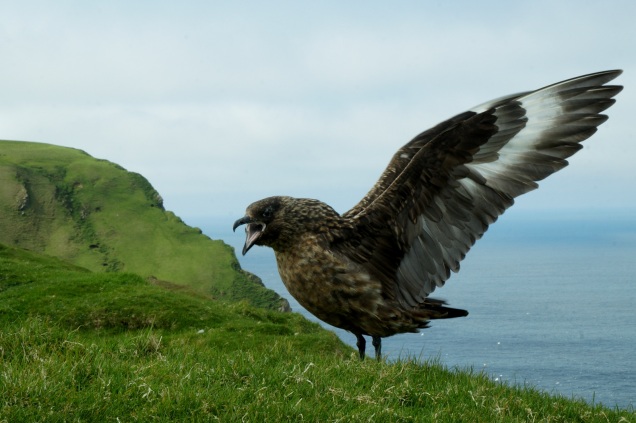 The cliffs and seabirds of Hermaness ©Mike Pennington

It reminds me of the irony pointed out by Douglas Adams: “Everything you go to see is changed by the very action of going to see it”, while there is also, I have to admit, something magnificent about having the huge vistas of the Hermaness cliffs all to yourself. But, such magnificence should be shared and admired. Many of my fondest memories on Hermaness involve showing school groups or tourists or friends and family the view from Toolie, or from the Neap, or from above Clingera Stack and seeing their reaction when they first see it. After lockdown, I look forward to seeing people come back to share the experience and cherish it.