The discovery of mining bees in Simon Ritchie‘s parents’ garden inspired him to read-up on these scarce burrowing insects. There are more than 1,300 species of mining bee around the world. However, only a fraction of these species are known to occur in Scotland,  making the task of identifying the find a little easier for Nature Reserve Assistant, Simon…

The bees I first noticed seemingly, magically, appearing out of nowhere in my folks’ garden, I later discovered to be buffish mining bees (Andrena nigroaenea). There are about 50 to  60 bees in the group I found living underground and they are beautiful, busy wee things. 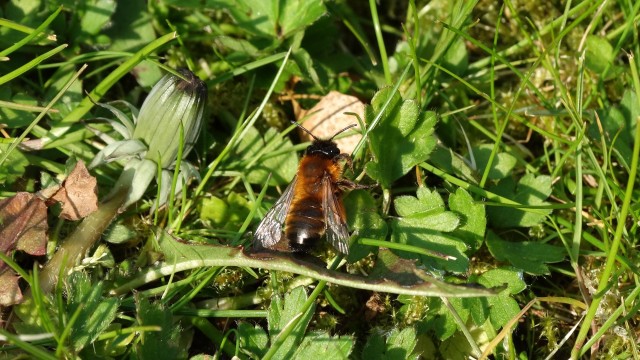 Mining bees are known as solitary bees because they do not work together and they live and feed alone. The colony  I’ve observed in the garden look like they are all socialising together, but this is not the case. Each bee creates a mining hole, and all of the holes together make a cluster of individual holes. Some mining holes can be used as a common hole meaning that numerous females will enter and leave the ground from that hole. However, they will still nest in solitude in their own ‘mine’ and will not interact with the other bees. The bees will spend the night inside their tunnel and when it starts to warm up in the morning, they will slowly emerge.

Mining bees or Andrenidae are the largest genus of bee in the UK with 67 different species. As the name suggests, they nest in the ground. Some bees can even nest in soft wall cavities and other areas in which they can mine. Mining bees a have flight period typically between early spring and late summer.

The mining bees first emerge from hibernation; typically the first to emerge from the ground are the males. They frantically search the area for females to mate with as they have a short lifespan. Once mated, the males tend to die off. The female then creates her cells (nests) and lays one egg per cell in her tunnel. The females tend to lay around five eggs. Then once the egg has hatched as a larva it will feed on the nectar and pollen that the female provided while laying. Fully fed larva then form a pupa which can overwinter under the ground to emerge as fresh adults the next year. The adults normally last 6-8 weeks and the cycle is repeated over again.

The life cycle of a mining bee, (c)G. M. Cottrill

Mining bees are usually fluffy or hairy and can have orange/black/grey hairs on their thorax. They have short mouthparts and a really pointy tongue. Mining bees can also be parasitised by other different kinds of bees. Other bees like cuckoo bees can raid the tunnel and lay its own eggs (much like the cuckoo bird). These eggs will hatch before the mining bees eggs and the cuckoo bee larvae will destroy the mining bee eggs and eat the pollen and nectar that has been provided by the mining bee – wow!

At St Cyrus NNR we have different species of mining bees. Including; tawny mining bee, (Andrena fulva), chocolate mining bee (Andrena scotica), early mining bee (Andrena haemorrhoa) and many others that I need to get out and have a look for! They are so fascinating and can turn up in any habitat. Have a look in your garden or your local patch for some mining bees. Look out for the mounds in the soil that look like mini molehills, then just sit for a while and wait for one to appear. It is extremely relaxing! If you are lucky enough to find a very active aggregation of mining bee nests, then try and get some photos and see if you can identify them, it can be a rewarding challenge. Happy Hunting!