Shooting frogs in the dead of night

Underwater photographer Mark Kirkland aims to bring the weird and wonderful of Scotland’s sea and freshwater life to the wider public. Recalling a mission shortly before lockdown restrictions, Mark gives us an insight into the techniques, patience and determination required when trying to reproduce an image conceived in the photographer’s head.

It’s 2am on a chilly Wednesday morning in March. I’m covered head to toe in mud, lying on the edge of a pond in complete darkness.  I’m waiting for the perfect moment to press the trigger of my camera which is sitting in a foot of water.

I’ve been here for over 5 hours, my flask is now only half full of tea and my bones are starting to shiver. It’s my fifth consecutive night here and my patience remains intact….just. In a few hours the industrial estate behind me will become a bustle of noise as the working day starts. Above, the stars peek out from behind the clouds and in front of me, the glow of the tower block reflects in the black water. 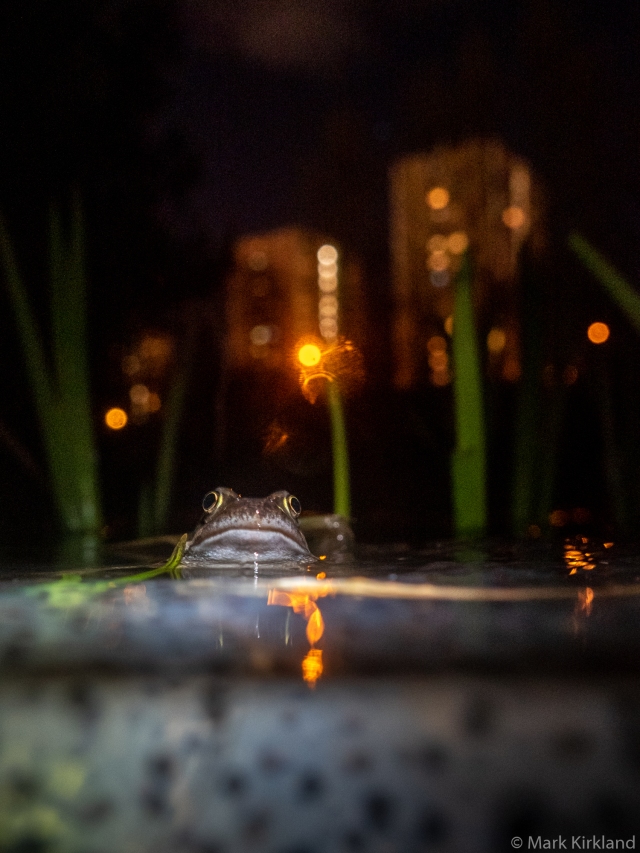 The water is still, apart from the intermittent movement of life — sometimes a gentle splash then a lengthy silence; sometimes a crescendo of vocal noise culminating in a frenzy of activity before suddenly pausing in unison. The silence returns, sometimes for a minute, sometimes for an hour or more.

I’ve been a keen scuba diver for nearly 10 years, however, for the last 5 it’s become a means to an end — the end being photographing the unseen wildlife of Scottish waters. Once I got my first underwater camera, the combination of creativity, unpredictability and that wee sense of adventure quickly got me hooked. 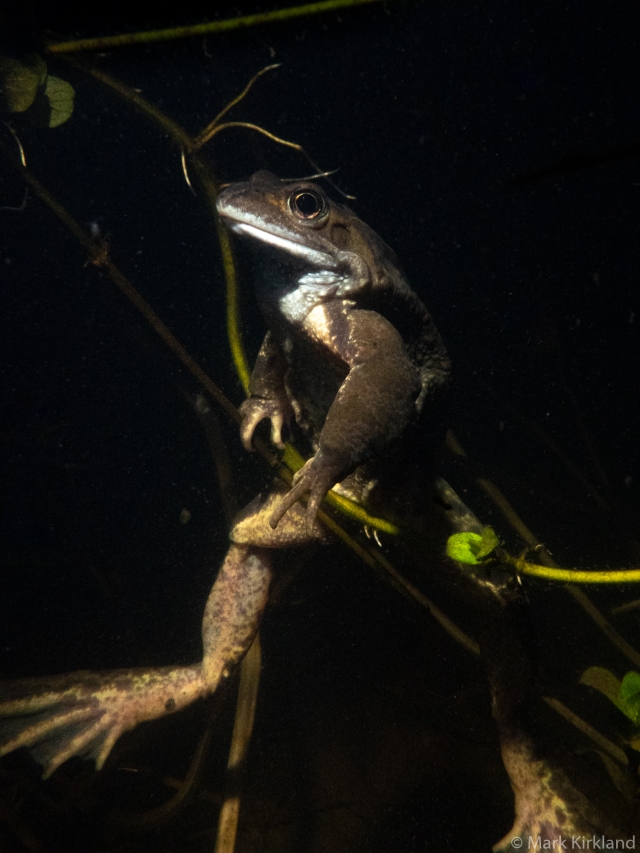 It’s a niche and technically tricky endeavour, with relatively few people in the UK taking on the challenge. Despite this, there’s a small group of accomplished underwater photographers in the UK with who I share ideas and inspiration. I’m always trying to push my photography beyond what I’ve tried before, creatively and in the subjects that I photograph. It’s a combination of both that led me to this small haven of urban wildlife in the South of Glasgow, (without my dive gear of course). 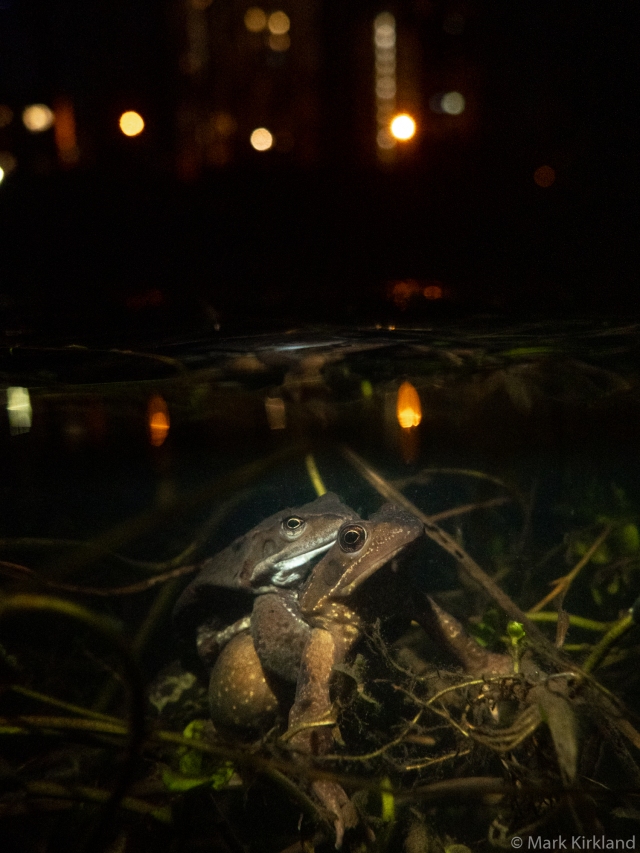 I first encountered the common frogs of Malls Mire in February 2018. It took some planning and luck to get here. With no knowledge of amphibians or freshwater habitats, I started my research by downloading research papers and contacting local and national wildlife charities and environmental agencies for advice. Despite the great responses, I still needed that bit of luck to find the right location. 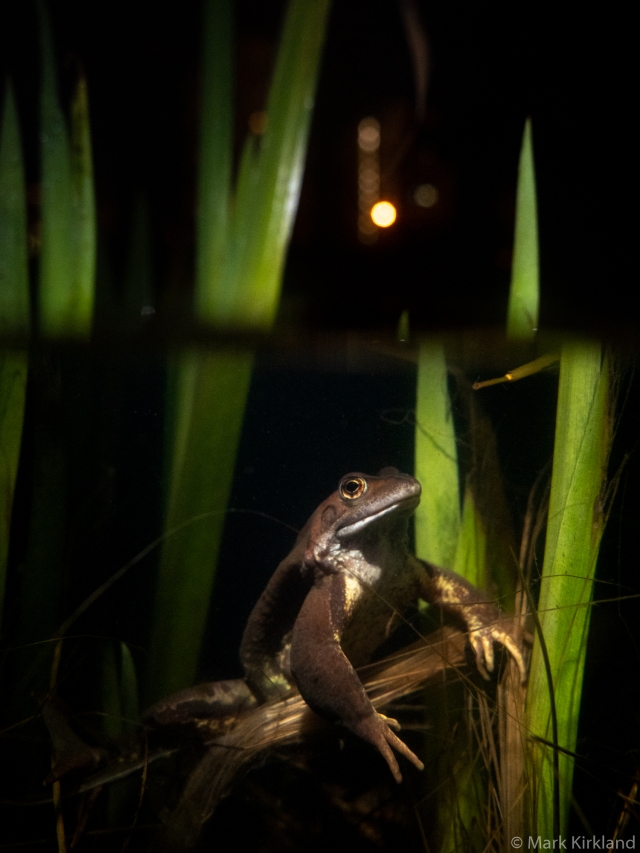 Common Frogs spend most of the year in underground burrows, only entering the water for a few days each year to mate. This happens when night-time temperatures rise above about 4°C, however, recent unpredictable weather has made this event hard to track. Over four weeks, I visited different locations every day — some a couple of hours drive away  — only to find empty ponds (too early) or ponds already full of frogspawn (too late).

I found the Frogs at Malls Mire towards the end of the spawning season in 2018. It was probably the day I was ready to give up. It’s a small area of community-managed mixed woodland and wetland in the South of Glasgow and just twenty minutes away from me. The location near the River Clyde makes it an important green corridor for urban wildlife. 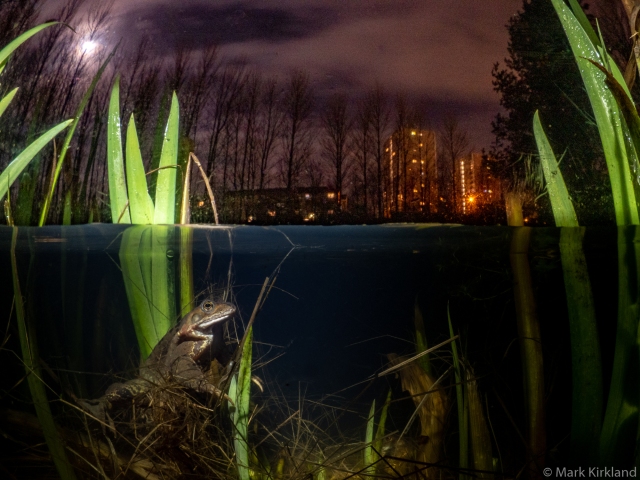 I quickly learned that frog behaviour is as unpredictable as the weather is these days. Unlike larger toads, frogs are easily spooked and can go into hiding for long periods, so one sudden move was enough to have them scatter out of frame and into the muddy underwater flora. I found that they are also incredibly curious. After a few hours, they grew comfortable with my shadow looming above and they would gather around the water’s edge until eventually, I’d have over fifty pairs of eyes staring at me. With gentle movements and patience, I was able to get my camera into the water and start taking photographs.

My head full of ideas and possibilities, since that first day, I could picture a photograph of the frogs underwater, with the tower blocks in the background. This ‘split shot’ photography (half underwater, half above water) is a tricky technique, sometimes used by photographers as a great way of putting something underwater into a wider context. It tells a more complete story. In this case, the intersection between hidden wildlife and its urban environment. Like most city wildlife, frogs are most active after dark and I wondered if I could add this extra layer to their story. I was intrigued by the idea of conveying another world on our doorstep that came alive as we slept.

I visited Malls Mire again in 2019, however nature, at it’s predictably unpredictable best,  served up a seriously muddy pond for the whole month with absolutely no chance of photography. This year the water was clear but it took four or five visits before the frogs emerged from their nearby burrows.

The shot I was trying to get over the next five nights combined multiple techniques: split photography; backlighting (where a flash is placed behind the subject); close focus wide angle (where you focus closely on a small object using a lens designed to capture wider scenes); and long exposure (usually used to photograph stars, it means the camera shutter stays open for at least a few seconds to get as much light in as possible — however, anything that moves is therefore blurry).

All of this was done using a (completely unreliable) remote trigger, which meant I could take the photo without touching the camera. I hit endless problems such as intermittent drizzly rain constantly ruining the top half of the shot, stirred-up mud, moisture in my underwater housing creating condensation on the lens, trying to focus in darkness (impossible), and trying to focus with torchlight (scares the frogs). The constantly changing weather meant I also had to frequently adjust my settings while trying not to move around too much.

Eventually, when the frogs, moon and clouds aligned perfectly, my remote trigger would inevitably fail. If it wasn’t that, my flash wouldn’t fire or my camera battery would die!

Despite more than 25 hours of trying, I didn’t get an image that I’m completely happy with. The shots are full of imperfections and there are a lot of ‘nearly, but not quite’ moments. It’s the perfect excuse to try again next year. Granted, it’s not everyone’s idea of fun but for me, it was five nights well spent. Aside from the enjoyment I get out of photography, I hope that some of these images help to show an insight into the lives of amazing animals that we share our urban spaces with. You can’t treasure what you don’t know exists.

All photos ©Mark Kirkland. To see more of Mark’s photography visit Mark Kirkland Photography, or you can follow his work on Instagram.