Buttery Business – the challenge of the invasive White Butterbur

Posted on May 8, 2020 by Scottish Natural Heritage

The Scottish Invasive Species Initiative is tackling invasive species in the north of Scotland, led by Scottish Natural Heritage (SNH) and funded by SNH and the National Lottery Heritage Fund.  Here one of the project team – James Symonds – tells us about the invasive White Butterbur.

White Butterbur (Petasites albus) is a lovely plant in many ways. Its white, hyacinth-like flowers, are, with the snowdrop, among the first seen each year and brighten up winter river walks. In summer its plate-sized leaves create overlapping mats of terrestrial lily pads that catch the breeze and flutter to and fro in shimmers of white and green – very striking.

However, its delicate appearance belies an insidious nature.

Native to the mountains of Europe and the Caucuses it was, like many invasive non-native plants, brought here as an ornamental species. Introduced in 1683 – much earlier than more headline grabbing exotics like Japanese Knotweed probably due to relative proximity of its natural range – it was recorded in the wild by 1843 and is now established and naturalised across much of Britain – North East Scotland seeing the highest concentrations of plants. 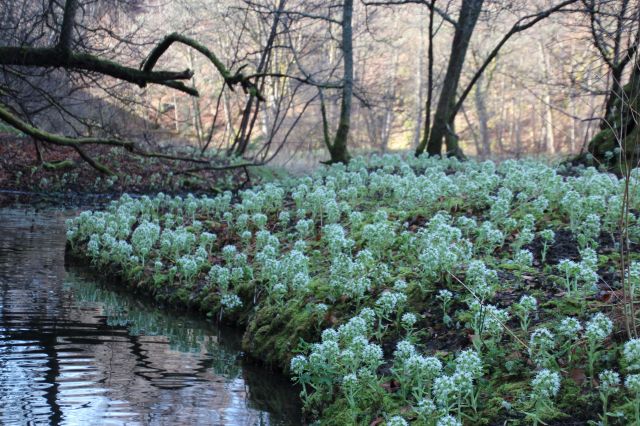 White Butterbur is rhizomatous – it has a network of interlinked underground roots (the rhizome) from which new plants grow. When leaves die back in late summer the plant directs energy to the rhizome for overwinter storage and is ready for growth and early flowering when conditions allow the next year.

By mid-April early May, just when native woodland plants are getting busy, its dense mat of foliage already covers and shades the woodland floor – denying other plants the sunlight essential for growth. The rhizome also has enough energy to spread laterally potentially, or eventually, taking over entire woodlands.

Nowhere is this more evident than the River Fiddich, a tributary of the Spey.  From confluence with the Dullan Water in Dufftown to meeting the Spey at Craigellechie, White Butterbur dominates.  Anywhere prone to flooding is covered – hectare upon hectare of ecological desert. Even young trees struggle to break through the darkness of the Butterbur’s low lying canopy.  Trees younger than 20 years are hard to find – challenging the woodlands very future.  So what can be done? 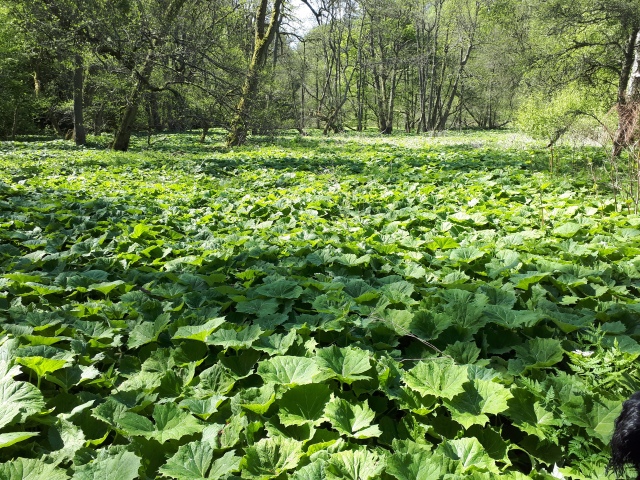 There is little research on White Butterbur control – so the Scottish Invasive Species Initiative has set up trials to see what works and what doesn’t – you can read more detail of these case studies on our website.

Early indications suggest, perhaps unsurprisingly, that systemic herbicide is the most successful control method with spraying most effective when the plant is in full leaf – June onwards. At this point the energetics of the plant shift and instead of directing energy to growth, it is transferred to the rhizome for storage.  This greatly improves herbicide translocation from sprayed leaf to rhizome – exactly where we want it!

So, if your daily exercise takes you along the riverbank look out for this pretty invasive plant and its cousins – the purple flowered native Common Butterbur (Petasites hybridus) and the formidable Giant Butterbur (Petasites japonicus) with its elaborate flower spikes and creamy flowers and leaves which can be 90cm across! 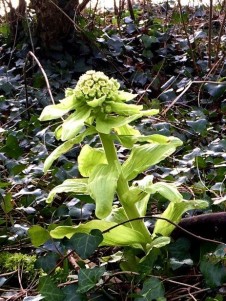 Due to current movement restrictions Scottish Invasive Species Initiative work has been severely restricted and we are unable to visit trial sites to update results.  But that doesn’t mean we aren’t keeping an eye on other invasive plants. Walking locally I see this year’s plants growing rapidly, look in on last year’s treatment sites, note possible signs of recovery and make plans for when we can again tackle these unwanted species.

If you do happen to spot White Butterbur, or other invasive plants, do let us know (sisi@nature.scot) – your records help us understand species distribution.  And of course we want to make the most of our precious time in the outdoors just now don’t we.

You can find information on the species we are tackling on our website.

Finally – how do you think the Butterburs got their name? Answers on the back of a postcard…..