Working on a Dragonfly Hotspot

Do you know how to tell the difference between a dragonfly and a damselfly? Read on for the answer as Marijke Leith, a student placement at our Tentsmuir National Nature Reserve, tells us what it’s like to work on a Dragonfly Hotspot.

When I started working at Tentsmuir in July 2019 I had just finished my zoology degree and although I had studied a range of species, dragonflies and damselflies had somehow eluded me. I had seen the occasional one on a pond when out for a walk or when doing fieldwork but I had never thought to stop and identify what species they were. However, I found myself working on a Dragonfly Hotspot, and for anyone who has never stopped to look closely at dragonflies and damselflies, be warned, it is highly addictive but I promise, very rewarding!

Morton Lochs is managed by Scottish Natural Heritage and was the second designated NNR in Scotland in 1952 before being joined with Tentsmuir Point and Tayport Heath to be managed together as Tentsmuir NNR. The habitat is a lovely mosaic of open water, reed beds, marsh and wet woodland which creates a site worthy of being one of only 10 Dragonfly Hotspots in Scotland. Working on the reserve I have been involved in dragonfly and damselfly identification events with Daniele Muir from BDS, undertaking dragonfly and damselfly transect counts around Morton Lochs and management of the habitat with the help of dedicated volunteers to keep the site in tip-top hotspot condition.

What’s the difference between a dragonfly and a damselfly?

The best way that I found to tell them apart is when they’re at rest. When at rest a dragonfly will have its wings out to each side much like aeroplane wings. A damselfly tucks its wings upwards and remains quite thin, like a pencil. Dragonflies also have chunkier bodies. 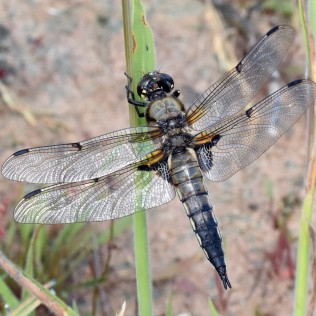 There are 4 species of dragonfly that breed regularly at Morton Lochs and they can be split into three categories – hawkers, darters and chasers. The two darter species at Morton Lochs are the common darter and the black darter. The common darter is indeed very common and on sunny days they sun themselves on the paths creating a dragonfly carpet. The black darter is seen in lower numbers but still on a regular basis. The darter part to their name refers to their behaviour in which they will perch on a fixed area and dart out to catch their prey which is typically other flying insects. The other two species found are the common hawker and the four-spotted chaser. The hawkers catch their prey while flying and chasers patrol their territory and will chase insects that enter. 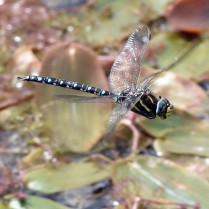 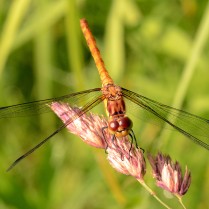 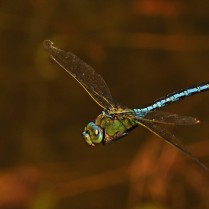 There have been infrequent sightings of the emperor dragonfly, which is also known as ‘Britain’s bulkiest dragonfly’. It is not yet certain if it breeds at Morton Lochs and we had a larval search event planned for May which has had to be postponed due to the Covid-19 restrictions. Hopefully this will take place at a later date and we find evidence of emperor dragonfly breeding!

There are 5 species of damselfly to be found at Morton Lochs; azure, blue-tailed, common blue, emerald and large red. All are quite common and on very sunny days in the height of summer the numbers recorded from the transect counts ranged from 10 to 50 for each species. Although trying to count that amount of damselflies is a challenge, it really is great to see the ponds, ditches and loch edges buzzing with life.

The first dragonflies and damselflies should be emerging any time now and will be able to be spotted as late as October. So if you go out on your local daily walk, keep an eye out near water bodies for some movement – it could just be a dragonfly or damselfly!