Fair Isle sits at the southernmost point of Shetland and its name derives from the Old Norse name Friðarey, meaning ‘island of peace’. Fair Isle is famous for its knitwear, historic shipwrecks and its diverse bird life, so what better place to study the Atlantic’s smallest seabird, the European storm petrel (herein stormies for short)? Helen Gunton spent a month on the island this summer, as part of her Masters degree in marine environmental management at the University of York, working on a project supported by SNH, in partnership with the Royal Society for the Protection of Birds (RSPB) and the Fair Isle Bird Observatory (FIBO).  Helen tells us more about her first visit to Scotland…

My journey to Fair Isle included two days in and around Shetland’s capital, Lerwick, where I saw my very first Orca! I ended up spending 8 hours in a stranger’s car driving around the coast to get the best view of the pod swimming by.  What a start to my time in Scotland!

It was then time to board the tiniest plane I’ve ever been on and get my first aerial view of Shetland. The views were stunning and the plane ride was smooth, but very noisy. I was greeted at Fair Isle’s small runway by FIBO warden, David Parnaby, who drove me to my home for the next four weeks, the Puffinn (the name made me chuckle).

My first week in Fair Isle was spent getting to know the land and seeking out potential stormie nesting sites. Fair Isle is about 5km long and 3km wide, with cliffs that rise to almost 200m, so my legs were in for a treat! Dr. Allan Perkins, a senior conservation scientist for the RSPB, and I needed to find out where and how many stormies are breeding on the island because no formal population estimates have been made on the island yet. Stormies are nocturnal birds that nest underground in crevices or in cliffs, so they’re incredibly hard to study. Their vulnerability to invasive non-native predators restricts their breeding distribution, making them a conservation priority. 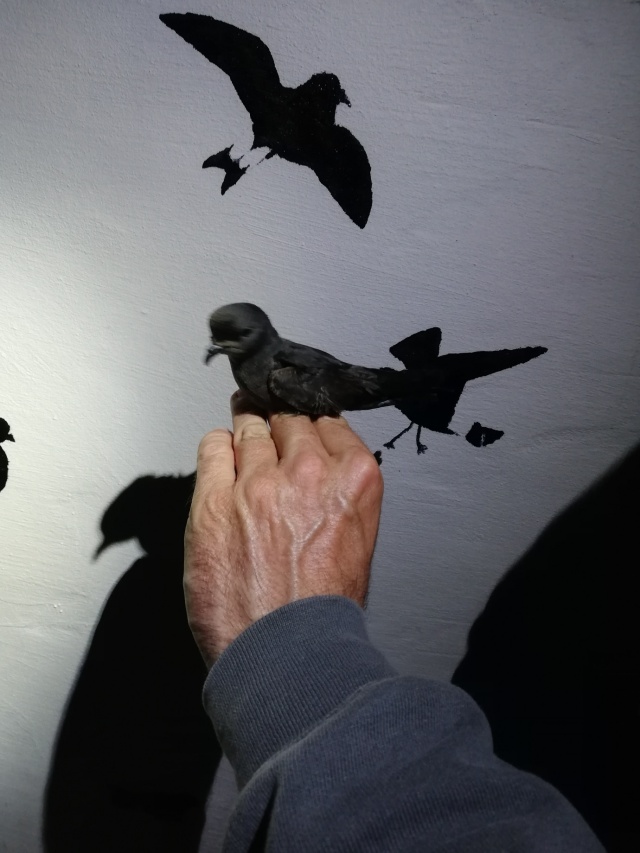 My first glimpse of a stormie on a ringing session. Photo credit: Helen Gunton

On my second day FIBO staff invited me to one of their stormie ringing sessions where I got my first glimpse of these tiny seabirds. My heart melted – nothing could have prepared me for this cuteness overload! I helped release a few birds after they’d been ringed and I couldn’t help but notice that they smelled quite nice, for a bird that spends most of its life out at sea. FIBO staff and volunteers ringed around 250 birds that night and they ring a maximum of around 4000 annually! One bird was already ringed revealing that it had travelled around 300km across the North Sea from Norway.

At the end of the first week we were invited to a Sunday night concert at the community hall, where the local band played songs by the likes of Tom Petty and Jonny Cash (which stuck in my head for a whole week after). They were really good and I witnessed how the community really gels here and how welcoming everyone was.  This was a great introduction to the islanders and over the following weeks people I met at the concert kindly offered my grateful legs lifts around the island!

The real footwork began in week two as we sought out potential stormie nesting sites by using recordings of their calls. If we got a response from a nearby stormie, we set up motion sensor cameras in the area and searched for evidence of predation. We played the recordings at several locations across the whole island and we calculated that we racked up over 2km worth of playback transects.

At the end of week two, as I was starting to doubt whether they were breeding here at all, I finally heard my first response from a stormie nest among a pile of boulders. Over the next few days we started to hear more and more stormies in different locations across Fair Isle, catching some glimpses of the birds flying over our heads at night. Unfortunately, we also found some discarded wings and carcasses of little birds, indicating that they are being predated on.

Puffin and fulmar with chick.

To find out what could be predating them, we set up motion-sensor camera traps in known and potential nesting sites. As well as some amusing images of curious sheep, we did manage to capture images of potential predators in nesting areas, these included cats, mice, ravens and great skuas, known locally as bonxies. We also deployed flavoured wax blocks around the nesting sites to get an idea of mouse activity in the area and to confirm the absence of rats on the island. Rats would be a major problem for the island. They’ve caused population declines and local extinctions of some seabirds and other species on islands and eradicating them is a lengthy and costly mission. Much better to avoid them being introduced in the first place and regular checks through the Biosecurity for LIFE project will help to prevent this. Around 25% of our wax blocks showed signs of mouse activity at nesting sites and, because mice can still predate on chicks and eggs, it’s important these mice populations are also regularly monitored.

My final week in Fair Isle mainly involved checking the camera trap images and setting them back up after sheep had knocked them over. We now have almost 24,000 images to review! The day of my departure I was scheduled to leave on the small ferry, the Good Shepherd, but it unfortunately sprang a leak (which I believe has been fixed now so you’re alright!) The rest of the morning was spent waiting for the fog to lift so I could fly instead, and still catch my flight home from Aberdeen.

My first experience in Scotland was hard work, but Fair Isle is a magical place. It’s one of the best places to watch seabirds at close range, to enjoy lazy seals bathing on the rocks and, with some luck, to catch a glimpse of some whales and dolphins. We found around 60 occupied stormie sites, which is likely to make the overall population estimate in the low hundreds (the data is yet to be analysed).  This made all the hard work worthwhile! If we come back for next year’s breeding season, we hope to find more birds establishing themselves on this beautiful island. And quite frankly, who wouldn’t want to call this place home?