Our guest blog this week is written by our SNH former colleague, Ron Macdonald. Now retired from the day job, Ron is still staying busy, chairing the North East Biological Records Centre and serves on the Scottish Wildlife Trust’s Conservation Committee – when he’s not watching short-eared owls in the beautiful North East of Scotland! 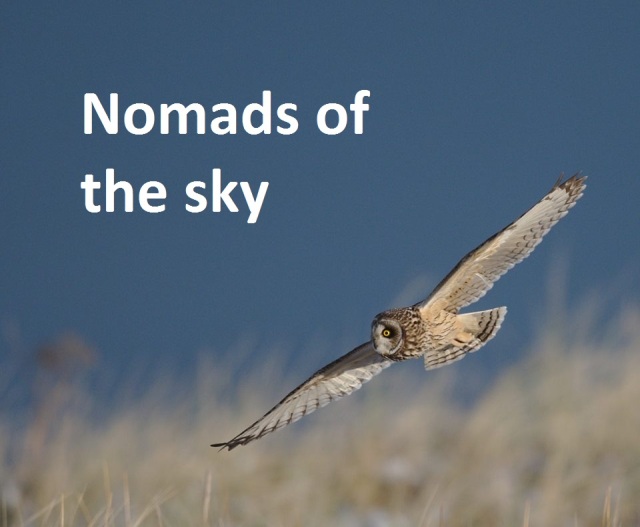 I’ve come to Forvie National Nature Reserve in Aberdeenshire to watch one of my favourite birds, the short-eared owl.

Definitely five, and possibly up to seven, have been here since October quartering the coastal heath and dune grasslands. They’ll stay until March when they return to their breeding areas or until their prey is so depleted they decide to move on.

The short-eared owl is a beautiful bird, with golden yellow irises and black pupils set against black mascara-like feathers, making their eyes stand out. The effect is a piercing stare that literally stops you in your tracks. 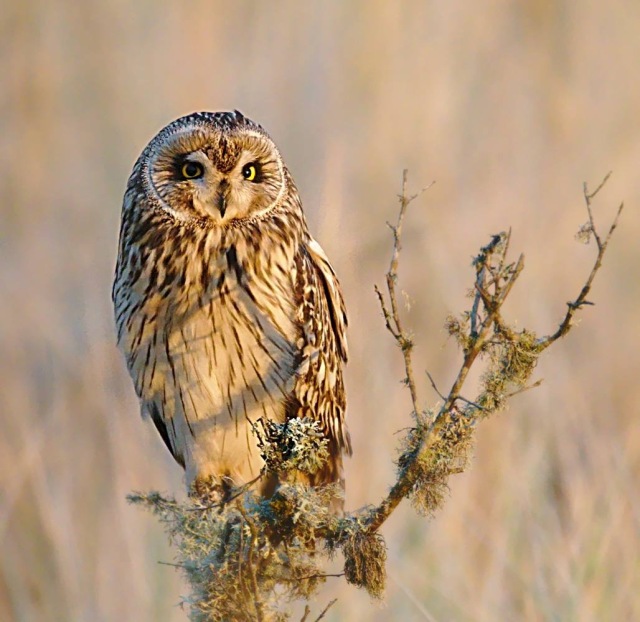 Like most owls, it’s primarily a nocturnal hunter, preying upon small rodents, particularly voles and field mice, but also small birds such as meadow pipits and reed buntings. One of the Gaelic names for an owl is cailleach-oidhche and this literally translates as ‘old woman of the night’. They also hunt during daylight, flying slowly in large or tight arcs as they quarter the ground, with occasional quick beats of their wings and then a slow glide until, on hearing a movement below, they hover, then pirouette- like, fold their wings and dive talons first into the vegetation to snatch prey. 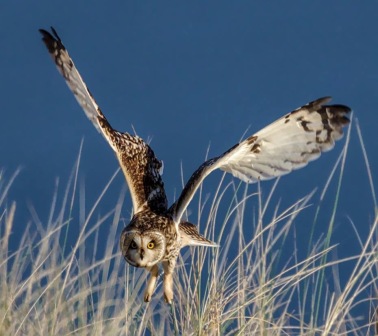 Short-eared owl about to dive on prey © RonMacdonald 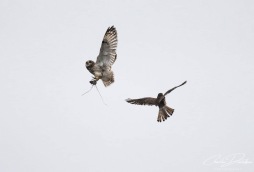 A kestrel homing in on a Short-eared owl and its prey. © Charlie Davidson 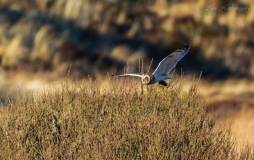 A short-eared owl making its getaway with a small rodent. © Lone Kiter 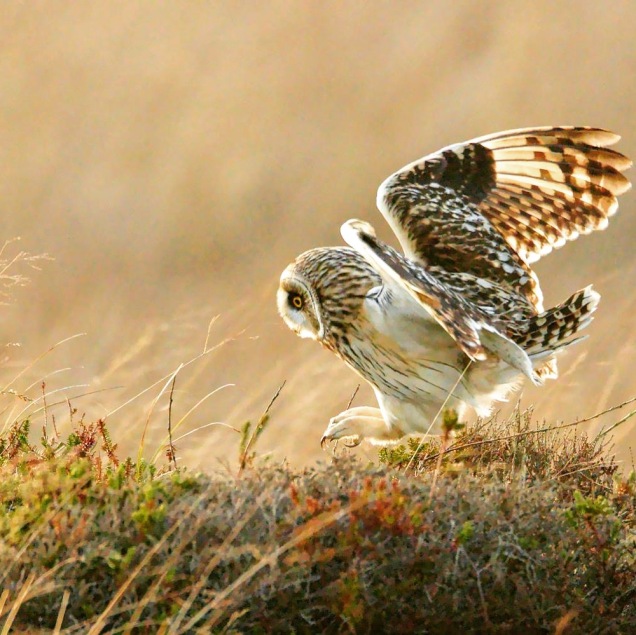 Following the ‘Forvie’ owls over the last four months is addictive. I can’t get enough of seeing them hunt, a love that’s shared by many, especially wildlife photographers who are attracted by their photogenic good looks and interesting behaviour.

Understandably for a bird that hunts primarily by locating its prey by sound, I come across them much more frequently when winds are lighter and it’s dry. Presumably it’s both the sound of the wind and rain and the rustling of the vegetation that is the reason. Anything beyond 15mph or light rain and it’s likely there will be a no show.

During inclement weather owls hunker down, often several together in long heather or grass, waiting it out until the wind or rain abates. During one recent hooley, two owls flew up as I stumbled across Forvie’s moor.

On dry nights with light winds, they will be feeding for most of the time, and if they’ve fed well, will become elusive during the morning, presumably resting in the long vegetation. They reappear again in the afternoon: early afternoon if the wind and rain have been strong or heavy in the days before and later if night hunting has been good. Like all predators, they only hunt when they have to.

Their success rate is surprisingly low-less than 10% of attacks I observed were successful. Some owls will consume their prey there and then, occasionally mantling it with their wings, before swallowing it whole. Bigger prey, such as birds and larger rodents are plucked before eating. I’ve also seen owls caching small rodents, creating a food store for when the weather or lack of prey makes it difficult to hunt.

When the owls reappear together in the afternoon, I’ve seen them fly over, splitting to go to different parts of the reserve. Aerial skirmishes are frequent, chasing each other and occasionally locking talons, with grating calls that show their annoyance. These don’t last long, the need to hunt overcoming any initial aggression. Owls will actively chase away kestrels from the area they are hunting over. However, all this changes if a food item is captured with other owls, kestrels and crows quickly zeroing in to try and rob the prey. Kestrels are particularly quick and successful at snatching food. 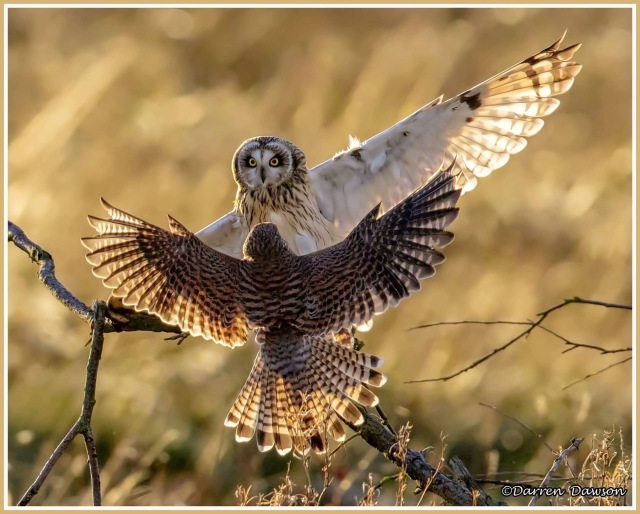 A face-off between a short-owl and kestrel trying to steal its prey. © Darren Dawson

Over the months, I’ve come to recognise individual owls by their size and plumage patterns and also by behaviour and feeding strategies. Males are smaller than females and one of these that I call ‘Blondie’ because of its very pale plumage will allow you to approach much closer than the others. In general, short-eared owls are tolerant of people and will pass within a few yards. This is only in winter as during the breeding season they are very vulnerable to disturbance and nest predation. If they perch close-by, you will know when they become alarmed by the manner in which they raise their ear tufts or adopt a hunched pose and by the way they change their face shape with the eyes staring you down. Occasionally, they will hiss, telling you to back off. 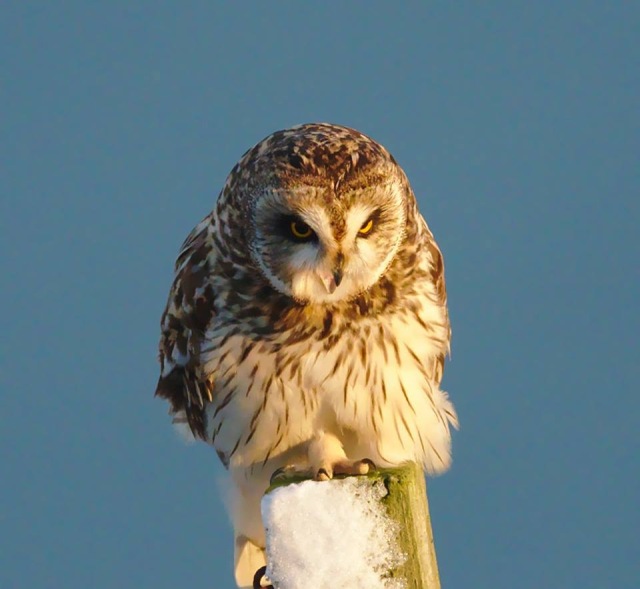 A short-eared owl displaying threat behaviour to a nearby owl. © Ron Macdonald

Another one of the owls has a very ginger tone to its plumage (yes I call it Ginger) and this bird frequently hunts over the scrub willow that surrounds Sand loch, diving into bushes in its effort to catch the small birds like reed buntings that feed and roost there. It’s even been seen to take an interest in a snipe which was flushed, although it quickly gave up the chase.

It’s likely some of the Forvie owls are from continental Europe, as shown by UK ringing recoveries. They mix with our native birds, which breed in the uplands and on islands such as the Uists and Orkney. With the coming of winter, our short-eared owls leave the uplands and move to feed and roost on the coast, favouring grasslands and heaths. However, they are occasionally also found in open scrubby woodland and on tidal salt marshes.

From 1970 to 2010, the short-eared owl has been lost from nearly half of its former UK breeding range (Breeding Bird Atlas 2007-11, British Trust for Ornithology) with a similar 50% reduction in the breeding population. The current UK population is estimated to be between 610-1240 pairs, the wide margin a reflection of how difficult it is to census the species. Scientists believe the actual term figure is closer to 610 pairs. It is now a rare UK breeding bird in urgent need of conservation management. 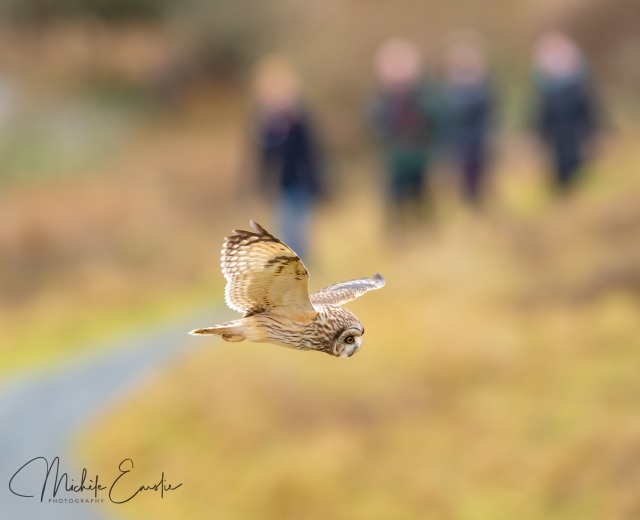 Short-eared owl hunting with visitors in the background © Michele Emslie

So what has caused the halving of the population in the last 50 years? One possible reason is that while our conifer plantations are very attractive in their establishment phase, with wide expanses of rough grassland rich in rodent and small bird prey, as they mature, they close in and the habitat becomes much less attractive to owls.

However, there well may be other reasons, as yet unknown, why we have seen such a dramatic decline. Current research by the British Trust for Ornithology in Scotland, using satellite tags, is looking at the owls’ habitat requirements throughout the year and hopefully this will reveal the key factors that determine their survival.

The results of the tagging are also showing just how nomadic they are. The map below shows the remarkable movements of a female SEO tagged as a breeding adult in May 2017 up to November 2018. In the two breeding seasons this bird has been tracked, it has nested three times in two countries, at least twice successfully fledging young. In common with other females which were followed, she left her young within weeks of hatching, leaving the male to finish rearing them to independence. 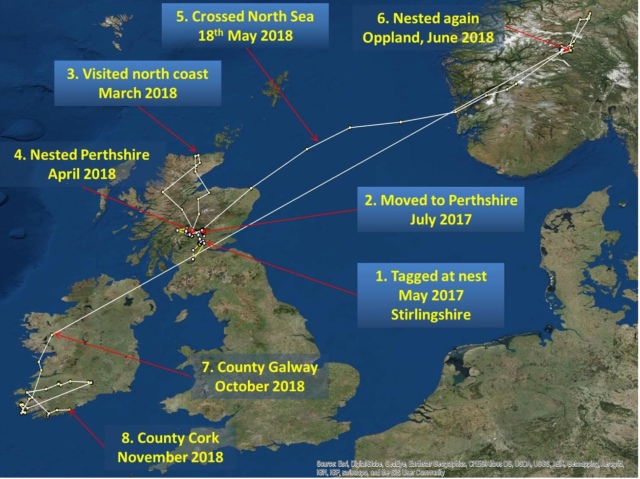 In the month or so before the owls return to their breeding areas I’ll continue to enjoy the ‘nomads of the sky’. Do please visit to see the owls and if I’m around I’d be more than happy to share my knowledge. I’ll be the one singing the 60’s classic rock and roll song, ‘The Wanderer’ – 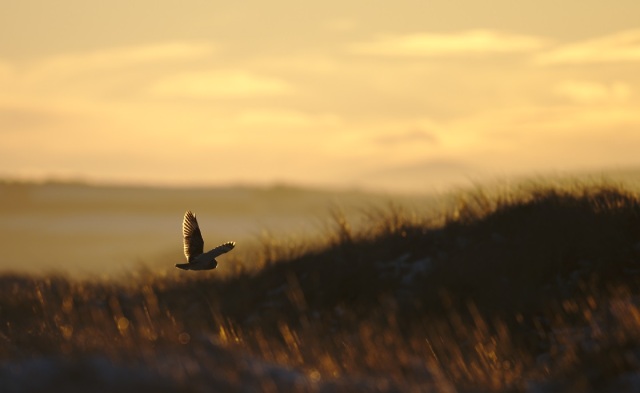 I wish to thank the following people: Dr John Calladine of BTO Scotland, who is leading the short-eared owl research programme, kindly provided advice and the map showing the movements of the satellite tagged female. However he is not responsible for my anecdotal musings. I also wish to thank Darren Dawson, Charlie Davidson, Lone Kiter and Michele Emslie for allowing me to use their fantastic photos.