On the trail of the 64s group – capturing Wild Shetland

Wildlife cameraman Fergus Gill was Maramedia’s main team member on the ground throughout summer 2017, when they filmed their latest spectacular nature documentary Wild Shetland: Scotland’s Viking Frontier. Fergus is of course the son of our own celebrated photographer, Lorne, who must be a proud Dad today after the programme was aired on BBC One Scotland last night. We’ve been lucky enough to catch up with Fergus and ask him a few questions about his experience filming on the most northerly parts of the British Isles.

Fergus and his Dad waiting for orca, © RichardShucksmith

Was this your first job as a wildlife cameraman?

I’ve been working with Maramedia for a number of years now in a variety of roles. Earlier on it was mostly as a camera assistant out on location and then filming stories myself in my spare time. Wild Shetland was the first time I was working predominantly as one of the camera operators, but at other times in the production I was still working as a camera assistant. My first week or so was spent scouting out filming locations stretching from Unst in the far North to Fair Isle in the South. When other team members  (Raymond, Pete, Justin and Jackie) came up I’d help and assist them with the filming, but in the weeks between those trips I was filming stories myself, which was an amazing experience.

How important is patience for a wildlife cameraman?

No matter how well we plan our filming, patience is always going to be required as you work to the schedule of the wild animals, not the other way around. When filming somewhere spectacular like Hermaness National Nature Reserve (NNR) in Shetland, it doesn’t require patience to see a gannet, as there are thousands of them there; but it does require lots of planning and patience to see particular behaviours and to get the best light to show off such a stunning place.

Other species, like the orca for example, are far more challenging to spot, let alone film. On my second day in Shetland I saw a pod of orca about 1km South of Sumburgh Head, the mainland’s southern tip. I could have been forgiven for thinking I’d get lots of opportunities to see them again throughout the summer but three months later, as my last week in Shetland approached, we’d still not managed to catch up with them to film anything. With Shetland’s thousand miles of coastline, you’ve not just got to be in the right place at the right time, you need to do that repeatedly to get enough encounters to build up a story.

What do you eat when you’re out in the field? Fergus and colleague Justin with penne lunch, © Maramedia

What was the most professionally satisfying thing you filmed?

The orca, or ‘Killer whale’ story was easily the highlight of my time filming in Shetland. Just to see these incredible animals hunting in the UK was extraordinary. To get to film them was extra special and something I could have only dreamed I’d get the chance to do.

In my last week we spent nearly every day out at sea searching for and following the 64s group as they moved around Shetland. The 64s is a pod of nine orcas which includes the infamous bull named Busta. This is one of two main pods that are seen throughout the year in Shetland, the other is the 27s, although other pods do visit Shetland. All the killer whales are in a photo ID catalogue and through research and encounters over the years marine biologists have worked out which individuals are generally seen together.

I was joined by local award-winning cameraman Richard Shucksmith and my Dad, who’d picked the best time to come up for a week’s holiday! We had several superb encounters, none more so than watching the pod successfully hunting very early one morning off the east coast at Eswick. I’ve never had an adrenaline rush like it, following and watching Busta and the rest of the pod was a real buzz. It took a week’s worth of encounters to build up enough footage to tell their story. Being out on a headland and filming them coming past often wasn’t enough as it’s all over so quickly. That’s why it was key to spend as much time with them as possible, to maximise our chances of seeing something different.

What are the main differences between wildlife photography and videography?

There are a lot of similarities between wildlife photography and videography when it comes to fieldcraft and patience. I think the main difference between to the two is how you tell a story. With photography one striking shot can be enough to convey a strong message. This can sometimes be more difficult to do in film making, if it requires context, a single clip often isn’t enough to tell the story you’re filming.  So it’s more about thinking of how to build a sequence of shots that together will tell your story. The benefit of this is that with the extra time and the addition of music, narration and natural sounds you can create something really strong.

What did you like most about Shetland and your time there?

I’d always wanted to visit Shetland, ever since I read Hugh Mile’s book On the Track of the Wild Otter when I was young. The scenery was stunning and I had a great time meeting the wonderful local people, all filled to the brim with knowledge and great humour! Shetland has got that mix of stunning scenery and incredible wildlife all packed into an area that’s not too large to explore. Every week I spent there I was discovering somewhere new. It’s that kind of place, where every corner seems to hide another dramatic stretch of coast. But it’s hard to beat the view from Neap at Hermaness NNR. I remember standing high above the cliffs at Hermaness, home to tens of thousands of gannets, thinking I can’t imagine there’s a more spectacular view anywhere in the UK.

How much of an influence has your Dad been on your chosen career?

Growing up in rural Perthshire I was surrounded by nature, and my Dad always encouraged me to get out and explore with a camera from a young age. I think the real benefit of this was to take pictures of what I saw and then be able to identify things later. I was always asking my Dad a million questions wherever we went. What’s that bird? What kind of tree is that? A camera was a useful tool!

Heading out to film storm petrels at Mousa with producer Jackie Savery, © Maramedia

As I got older it started to become a means of remembering special encounters with wild animals. The first that really sticks to mind was on a beach at the bottom end of the isle of Coll in the Inner Hebrides, photographing a pair of non-breeding sanderling in summer. I remember slowly crawling closer and closer and taking photos on my Dad’s first digital camera. It was amazing to be able to see the pictures straight away. 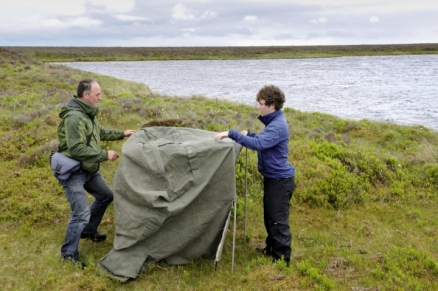 When can we next expect to see your work on our screens?

I spent all of last year filming a 10-part TV series at the SSPCA’s National Wildlife Rescue Centre near Alloa, for the new BBC Scotland channel. The series follows the stories of injured and orphaned wild animals and the people who look after them as they get fit and return to the wild. That will hopefully be on TV in the not too distant future.

If you haven’t yet seen Wild Shetland: Scotland’s Viking Frontier you can catch it on the BBC iplayer here  (until 22 February). You can follow Fergus’ promising career and see where it takes him next on Twitter – @Fergus Gill.