The bird with the golden eye

Goldeneye may bring to mind one of the better James Bond movies of the 1990s but it is of course also a medium sized duck which is found all around the world’s more northerly regions, from North America, across Europe to Asia. But is there more to this bird than meets the eye? Nigel Buxton, our Natura Project Manager, tells us more…

The goldeneye (Bucephala clangula), for most of the year, is a widespread and common bird in Scotland. It is also one of our rarest breeding ducks. 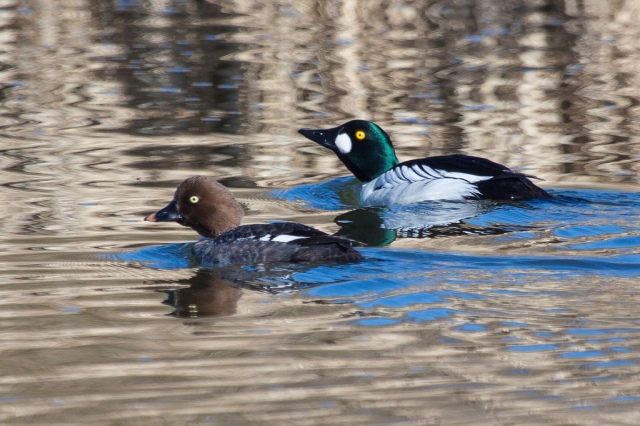 It’s a diving duck with marked differences in appearance between the green-headed, black and white males and the significantly smaller brown-headed, mottle-grey females. Although the two sexes couldn’t be more different in their plumage, what they do have in common is a bright yellow, or golden eye. 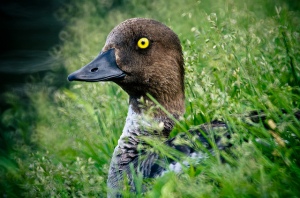 The UK wintering (non-breeding) population of goldeneye is estimated to be about 27,000 birds. The most recent British Trust for Ornithology Atlas shows the species to be widely distributed during winter, being absent from only the highest areas, including the Grampian mountains and the Pennines, and the more remote parts of northern Scotland. Overall the birds are most densely concentrated in the north of England and Scotland, especially towards the coast.

Currently 12 of the top 20 locations for overwintering goldeneye are in Scotland, several of which are Special Protection Areas (SPAs). These include four coastal locations, although only recently have ornithologists realised the true importance of coastal areas for these over-wintering birds. The Scottish goldeneye SPAs are: the Firth of Forth, the Firth of Tay and Eden Estuary, Loch Leven, Loch of Skene and the Upper Solway Flats and Marshes. These sites are part of a network of over 1500 protected areas across Scotland that are nature’s special places. SNH plays a key role in looking after these sites and monitoring their wildlife. Some are nature reserves managed by SNH or charities, but most are privately owned. Thanks to Scotland’s Outdoor Access legislation most sites have good public access.

Heavily watched areas like the Firth of Forth have been known about for decades, largely popular with the birds because of the edible refuse which was emptied from sewer outfalls and the ensuing enrichment of the surrounding locations. At one time back in the 1970s more than 4,000 goldeneye were regularly concentrated into this firth, alongside thousands of scaup, common scoter and eider. As the Firth has been cleaned up, especially from the 1980s and 90s, these numbers have plummeted and larger numbers become less regular, as birds presumably disperse to look for winter food elsewhere.

Today we know that significant numbers of birds are concentrated in 10 main sites. At Scottish locations goldeneye numbers increase rapidly in November, reach a peak in January and decrease rapidly from March. Very small numbers remain through May, June and July.

Alongside the pintail, garganey and common scoter, goldeneye is one of Britain’s rarest breeding ducks. Although the birds can turn up in many areas of Scotland, all wild breeding records are concentrated in a very small area of Scotland.  In the recent past there were around 200 breeding pairs here, however, today it’s thought there are probably less than 100 pairs.  A significant difference from these other three species is that the breeding population is over 90% maintained through the provision of nest boxes – only a very small number of birds nest each year in natural holes. Without the nest boxes the goldeneye would almost certainly be Britain’s rarest breeding wild duck. Throughout the remainder of its northern natural range it nests in tree holes provided by species such as black woodpeckers.

It has a curious breeding history in Great Britain. It has been well known here for centuries as a wintering species but there are no references to its breeding. The first breeding record was only in 1970, at Loch an Eilean in Badenoch.  The subsequent provision of nest boxes has allowed the population to build up, generally along the River Spey, although nest boxes were provided far more widely. Since about 2000 another population has built up in a small locality in Deeside. Elsewhere there are just a few scattered breeding records in northern Scotland. 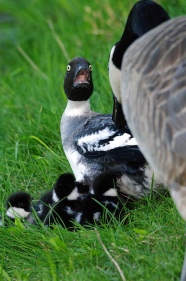 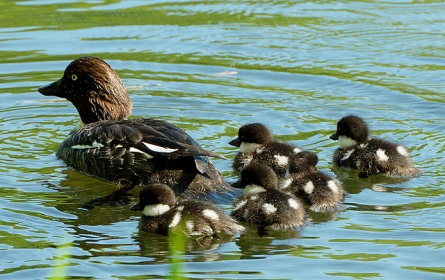 The courtship display of goldeneye has been described as being more spectacular than that of any other duck.  The complexity of this showing-off has attracted the attention of several naturalists who have written about it in great detail, giving names to many of its moves, including the masthead, the bowsprit and the head-throw-kick.  The latter involves bending the head back as far as it will go until it to touches the rump, while moving rapidly forward and kicking up water with its feet. Females respond with their own displays, most often with the ‘head-forward’ move. Monogamous pairs form and they stay together until early in the incubation period when the male abandons the female, who then raises the ducklings by herself.

For more information on Scotland’s network of protected areas, including finding your nearest, visit our Sitelink website.