Half way through the final leg of her epic active travel challenge, the end is almost in sight now for Francesca. Today in her penultimate #CycleForNature blog post she tells us about her visit to the Northern Isles.

I have been to Shetland before, but never by ferry. It was a remarkably good experience and I congratulated myself on finding my sea legs on the long crossing from Aberdeen to Lerwick (pride comes before a fall). Off the ferry and straight to the Lerwick office where some of the earlier starters were already busy at work.

Leaving the Shetland office on the final leg of #CycleForNature. An amazing week ahead.

After a coffee and a chat, I hit the road with Colin Smith (Shetland Islands Council) and Gary Robinson (Chair, NHS Scotland). Our destination was the Hoswick Visitor Centre for a meeting with active travel partners organised by local operations officer, Juan Brown. It was a beautiful sunny, if blowy, ride and the Hoswick Visitor Centre is worth the trip: part gallery; craft shop; cafe; and community space. As well as the active travel discussion, we had a good explore of local paths and learned about improvement plans. In addition, we also heard about the ambitious plans for the Visitor Centre itself, recent recipient of a grant from the Rural Tourism Infrastructure Fund. 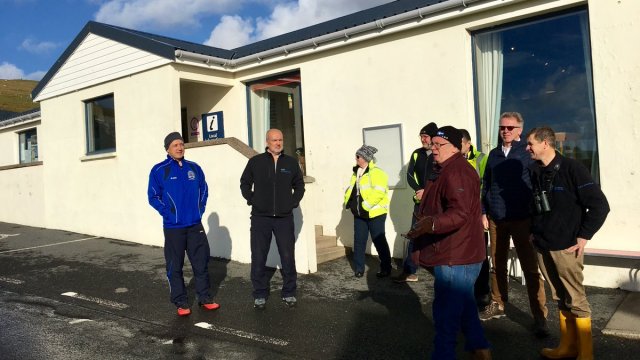 A lovely tailwind helped us back to Lerwick and I had a good discussion with Colin and Gary as we went about partnership working, particularly in relation to active travel. I was also able to chat to Gary about the benefits of “nature prescriptions” where the approach taken on Shetland was in the news recently.

Learning about active travel with Colin and Gary

There was time back at the office for a lively chat with colleagues about SNH’s work in Shetland and how we could engage more with local communities. It was then back on the ferry for the shorter journey to Kirkwall. Shorter, but very bouncy and I definitely wasn’t feeling smug about my sea legs anymore.

A grey seal send off

Tuesday morning dawned a little bit damp. First order of the day was a short walk to the BBC Radio Orkney studio for an interview about #CycleForNature and the physical and mental health benefits of enjoying nature (you can hear it here, from 24.50).

Then to the Kirkwall office, in sombre mood given the very sad new of Operations Manager Gail Churchill’s death after a long fight with cancer. Gail was a very dedicated colleague who continued to work until only a few days ago. She had worked as part of our Orkney team for many years, and her expertise and enthusiasm will be greatly missed. All our thoughts are with Gail’s family and friends.

After some time in the office, operations officers Donna Yule and Kim McEwan gave me a whistle stop tour of the area around the Scarpa Flow where we discussed assessing the cumulative impact of potential windfarm and fish farm developments. By the time we got back to the office, the skies had lifted and it was therefore a good time to get on the road.

With the Orkney team

Accompanied by demon cyclocrosser and operations manager Dan Brazier, we raced across Orkney to Stenness. We stopped on the way at one of the trial trapping sites for the Orkney Native Wildlife Project, which aims to eradicate non-native invasive stoats from the Orkney Islands. I had a go at re-setting a trap: more difficult than it looks but at least I still have all my fingers.

From Stenness we carried on to Stromness via the Lochs of Stenness and Harray. Once just a single loch, both are now important for the biodiversity that they support. The Loch of Stenness is unusual in that its varying salt content means it supports both fresh water and salt water species. We also had a quick visit to the important Neolithic site of the Ring of Brodgar, the most northern circle “henge” in the UK. 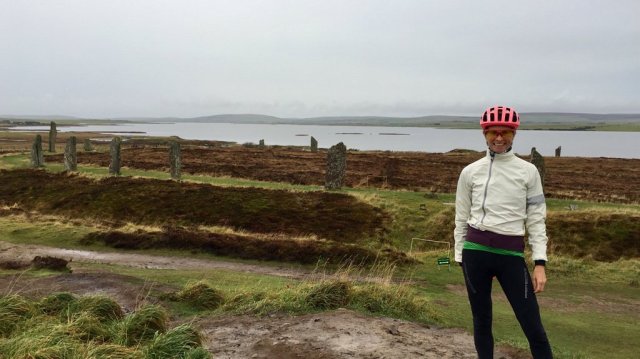 At the Ring of Brodgar

At Stromness I met our RSPB partners in the Orkney Native Wildlife Project and discussed the importance of engaging the local community in the project, as well as the sheer logistics and physicality of setting around 10,000 traps. Plenty of work to do but an exciting and energising project. I also met Macca the terrier!

With Macca the Terrier

Then another ferry for the relatively short journey to Scrabster. An all too brief visit to Shetland and Orkney, but plenty of reasons to come back.

Through #CycleForNature I am raising funds for the Scottish Association for Mental Health, via Just Giving.