#CycleForNature – 6 legs down, one to go!

We left Francesca midway through leg 6 with the sun in her eyes, as she sailed west towards Islay on ferry number three of the week….

Thursday dawned bright and breezy; first stop was SNH’s office in Bowmore where I had a good discussion with colleagues about SNH’s work in the area: geese, deer and agri-environment schemes dominate. I also met colleagues from the Argyll and Countryside Trust, co-located in the Bowmore office, who are delivering peatland restoration work through the Collaborative Action for the Natura Network (CANN) project. A really important project for the island.

It was just a short cycle, raced by operations officer Rae McKenzie on an electric bike!, to Port Askaig for ferry number four of the week to Jura. It was my first visit to Jura and it has a very different feel to Islay. Operations officer, Andrew Kent, joined Rae and I for a meeting with the Jura Deer Management Group.  Although the group is in its infancy, it is working well and collaboratively to maintain the deer population at a level which brings significant economic benefit to Jura. 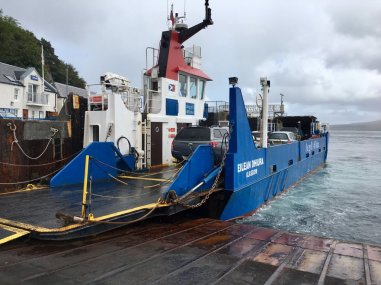 On the way to Craighouse

Ferry number five of the week took me from Craighouse to Tayvallich, where I was met by SNH colleagues Stan Phillips and Karen Taylor.  We travelled to Knapdale woods to see the site of the beaver reintroduction and I learned more about these fascinating creatures. Although I didn’t spot a beaver, I did see one of the very intricate dams that they had made and learned about the benefits that beavers bring, including increased biodiversity and flood prevention. 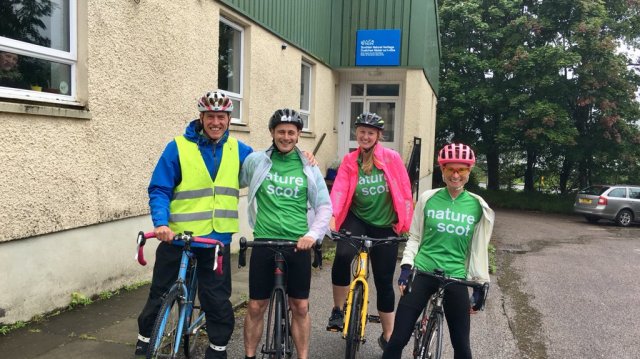 It was slightly damp when a small group of cyclists left,  heading first to Moine Mhor National Nature Reserve. We stopped at Dunadd, the ancient capital of Dal Riata, to try out the King of the Scots footprints. Moine Mhor is an important NNR for peatland restoration and I learned about all the re-wetting work that is going on there. 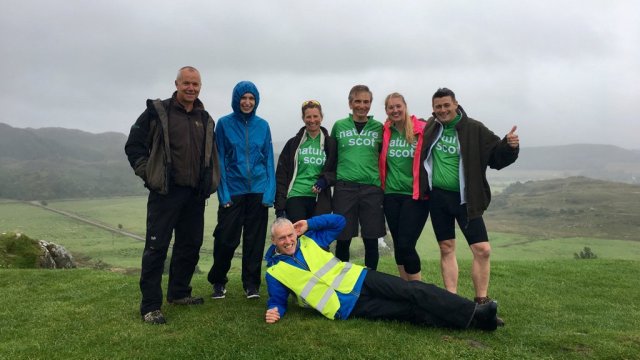 At the top of Dunadd, seat of the ancient Scots kings

From there we headed to Kilmartin Glen. We met Sharon Webb, director and curator of the fascinating Kilmartin museum. We discussed plans for the future, including world heritage status for the richness of the Neolithic relicts in the area. 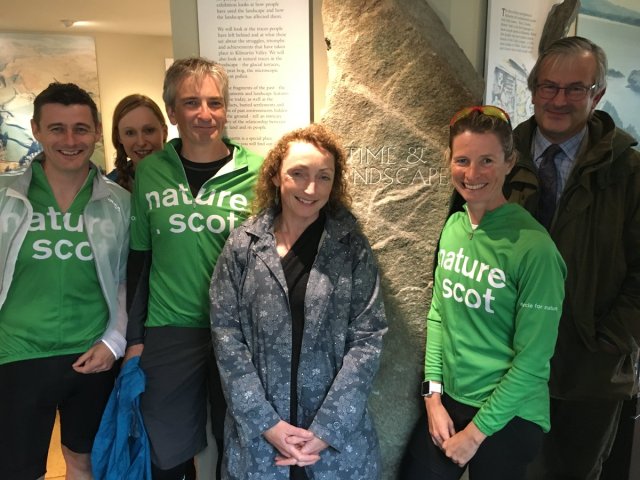 At the fantastic Kilmartin Museum, home of amazing Neolithic finds.

It was then back to the office and the penultimate leg of #CycleForNature was over. Six offices / NNRs visited, five ferries, 153 miles cycled and lots of fantastic conversations.

Remember that #CycleForNature is raising money for SAMH, Scotland’s mental health charity. Please support this important cause if you can. https://www.justgiving.com/fundraising/cyclefornature2018