Innovative crofting on the West Coast 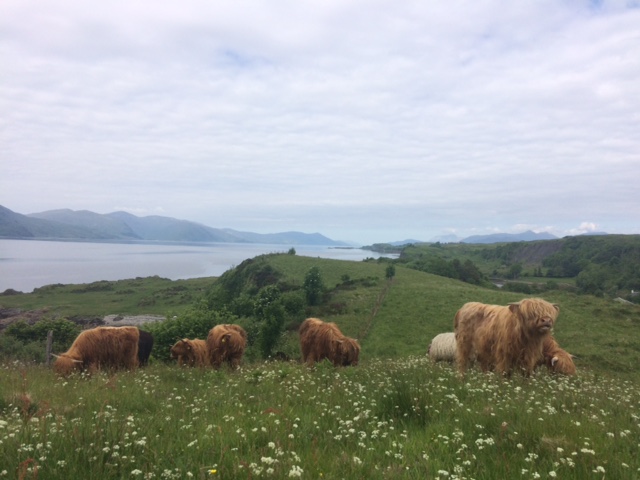 The Highland cows beginning to graze a fresh paddock.

On the morning of 5 June, SNH staff were joined by colleagues from Rural Payments and Inspections Division (RPID), National Farmers Union Scotland (NFUS) and Scottish Agricultural College to travel the short distance by ferry from Oban to the Isle of Lismore. Here we were met by Roger Dixon-Spain and guided to the croft Sailean that Roger farms holistically with wife Gilly and business partners Dan and Fieke.

As we arrive at Sailean and take in the view down the road towards the skyline of the Ardnamurchan peninsula, we get our first glimpse of this lush corner of Argyll.

Before we rush off to explore, we’re ushered into Gilly’s basket weaving studio which is doubling up as our classroom for the day. It’s here that Roger explains how he and Gilly ended up on this small West coast croft.

Surprisingly, Roger’s first foray into agriculture was very different and saw him running a 1500-acre intensive arable farm in Cambridgeshire, without much education in agriculture or soil issues. In fact, Roger attests that he never wanted to farm but shelved his dream of being an artist to continue the family farm. Many years later, despite having turned the business around and made a success of it, Roger had the chance to sell up and move away from the arable business, while Gilly stepped back from her dental practice. By a stroke of fate, they ended up sailing around the West coast of Scotland and bought Sailean just months later. Because Sailean is a croft, unused land can be utilised by neighbours so it was a natural step for Roger and Gilly to have their own livestock. 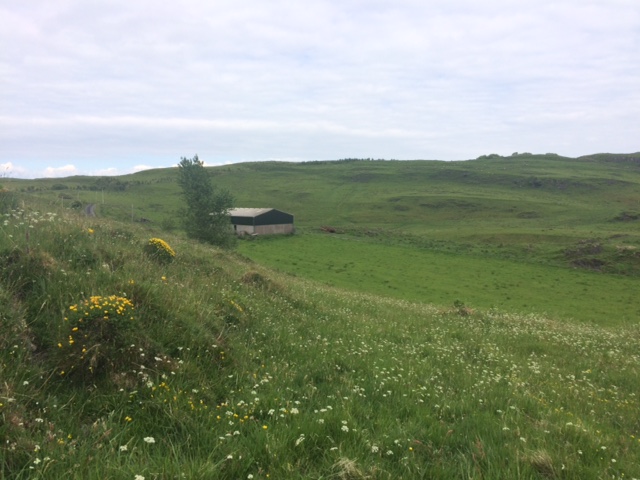 The herb-rich grassland of Sailean in comparison to a silage field.

The real turning point in terms of their beliefs and agricultural practices was watching a film called ‘Farm for the Future’ by Rebecca Hosking. After this the couple began to research the means and ends and came across Allan Savory, Gabe Brown, Joel Salatin and others involved in Holistic Management and regenerative agriculture. At Sailean, Holistic Management means using a mixed herd of sheep and cattle – a #flerd  – to rotationally graze the pastures.

The regular movement of the animals mimics the natural movement of ungulates in a landscape with predators; the underlying principle to all of this is the belief that nature has the answers.  In order to keep a tall sward of grasses and other species, the animals are contained in each small, temporary grazing area for usually around 24 hours only. The pastures are monitored by the team and they move the herd on so that each piece of land receives a short hit of grazing, trampling and natural fertiliser in the form of animal dung.  No chemical inputs such as pesticide or fertiliser are used on the croft and the rich mix of grasses and herbs appear to have regenerated with this grazing. 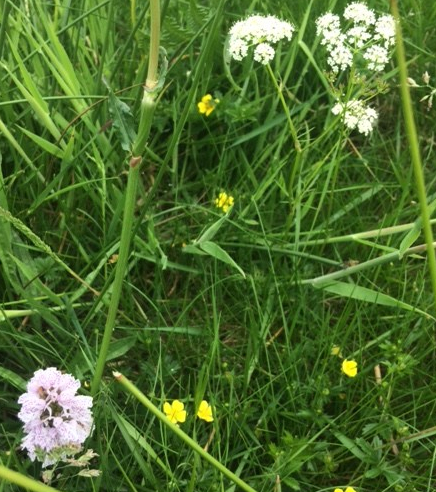 The thick vegetation that covers Sailean’s pastures include meadow buttercup, cow parsley and common spotted orchid, as well as carpets of Bird’s-foot-trefoil.

Gilly  talks us through the relationship between tall sward height and healthy root systems and reminds us that when we talk about the carbon ‘stored in soil,’ we’re actually talking about the extent and health of plant root systems which are carbon-based. If those roots are attached to a plant which is killed by overgrazing or chemical spraying, then the carbon which comprises the roots will be lost from the soil. A key aspect of regenerative agriculture is that we can increase the carbon stored in soils through healthy, growing plants and no bare soil!

Sailean is grazed intensively but with significant periods of recovery in between, rather than extensively. The animals don’t have time in each paddock to graze out all the palatable species and leave rank grassland.

There are so many aspects of Sailean that feel extremely well thought out – exactly the point of managing holistically but the fact remains that to survive into the future this business has to pay. Here is where Dan and Fieke step in: they met Roger and Gilly just a short while ago on Lismore and have since become indispensable. They have become a team of four, managing Sailean through moving stock, scything, working in the no-dig vegetable garden and rearing pasture-fed chickens for both eggs and poultry. Fieke has been working hard to grow the business by working on the digital platforms to increase engagement and promote the produce sold directly to customers.. 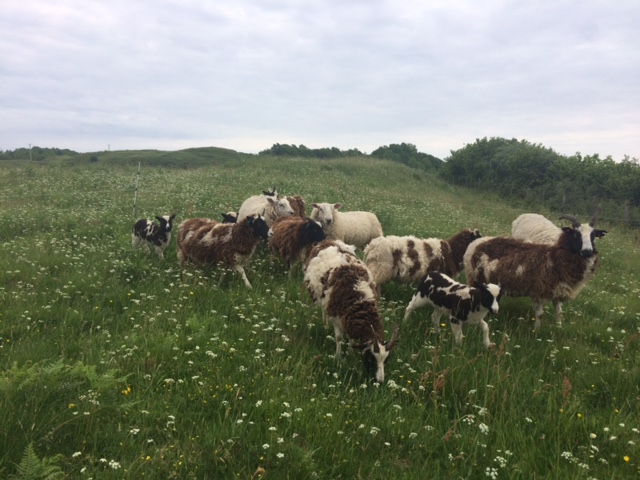 In the near future, the team hope to enter into a business arrangement whereby Roger and Gilly can hand on the business to Dan and Fieke and continue to live in their home on Sailean. This is succession planning in action and it is really impressive to see the next generation coming into the croft and sharing their own experience while being taught the skills they will need to manage this place in the future. As well as producing pasture-fed beef, lamb, chicken and eggs, the business will continue to provide courses, such as the one we attended, and also offer accommodation.

On the ferry ride home under blue skies, we discuss what is unusual about this place.  The innovation here is using people on the land, rather than technology or chemicals, to improve soil quality and produce healthy food. The grazing system is innovative but it relies on human effort rather than expensive inputs.

Across Scotland, there is an ageing population employed in the agricultural sector and often stock can be lost to poor health and unknown causes or even predation, so moving them daily is a useful way of checking condition and numbers while simultaneously creating a ‘scaring’ effect. There is much here to consider for the future. If you would like to visit Sailean, you can find more details on their website.

One of a series of videos filmed at Sailean showing how the croft is managed over the seasons –https://youtu.be/Sbgook34ZOM