On 11-12 June, SNH Marine Operations Officer Dr. Jane Dodd began her Team Leader training while taking part in her 3rd ORCA survey on Caledonian MacBrayne ferries out of Oban. Here, she shares her experience as an Onboard ORCA Marine Mammal Surveyor sailing from Oban to Castlebay.

ORCA survey for whales and dolphins on regular ferry routes around the UK. Since the ferry routes are always the same, it provides a long term record of occurrence of these animals in specific areas around our coasts. The collaboration between ORCA and CalMac began in 2015 but these regular, ferry-based scientific surveys are new for 2018 and started in the spring.  Several ferry routes were selected (based on the likelihood of sightings and logistics for volunteers taking part) and a survey takes place on each of the chosen routes once a month, weather permitting.  Anyone can join ORCA and volunteer – they just need to take a one day training course to join a survey team.

I’ve participated in three ORCA surveys so far: one in April Coll, Tiree and Colonsay; a second in May for the same route; and a third in June between Oban and Castlebay to the Isle of Barra. This latest survey was definitely the best!

The weather was glorious as the MV Isle of Lewis left Oban and we were given permission to go up to the bridge.  It is a privilege to be allowed up there, as most members of the public do not get that opportunity. It certainly feels like a special place: it’s quieter than everywhere else on the ship, it’s bright and airy and the view is fabulous!

Surveys are carried out in teams of 4. One team member watches on the port (left) side while another watches on the starboard (right) side. A third records environmental data like rain, the state of the sea, and any sightings on the electronic logger. The fourth team member is on break: we rotate roles every 30 minutes to keep our eyes from getting too tired.

On this trip there were several sightings at the same time on a couple of occasions, which is exciting! We record the species and number of animals, their position relative to the ship and any behaviour we can identify such as resting or fast swimming. It can be difficult to do this all at once when there are multiple sightings, but the electronic data collection system ORCA uses means the recorder is able to log the position of the sighting and come back to it later to fill in the detail.

On the way to Barra we were treated to sightings of minke whales, groups of common dolphins and breaching basking sharks!  We arrived in beautiful but slightly chilly Castlebay and stayed the night in the cosy Dunard Hostel and Lodge.

The following morning we got up bright and early, not really daring to hope that our return trip would be as good. The watch started very well, with bacon butties delivered by Captain George Campbell. We thought it couldn’t get better than that but, incredibly, we were spoiled with the same show as the previous day but in reverse: lots of common dolphins and basking sharks, a couple of minke whales, 2 harbour porpoise and a grey seal! 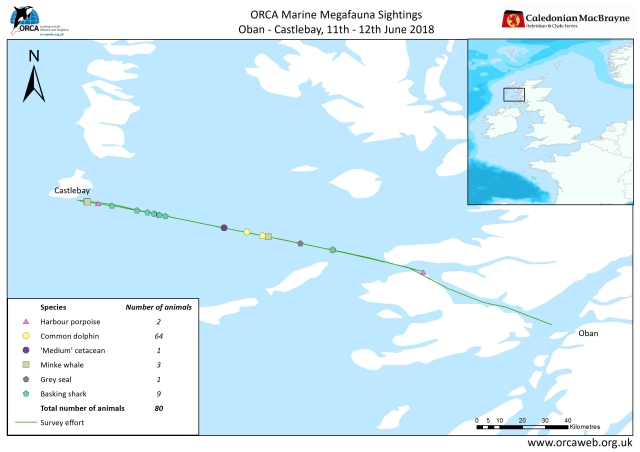 Lots of sightings meant we were kept busy but I was able to start my Team Leader training with Lucy, the Head of Science and Conservation from ORCA who joined us for the trip. Once I complete my training, I’ll be responsible for the team during the survey: I will interact with the CalMac staff, make sure the survey is carried out correctly and write a short report on our return.

I have to say I was daunted by the prospect of leading a team but CalMac have been very welcoming, the volunteers I have met so far have been really knowledgeable and professional, and the support I have had from ORCA has been so good that I’m sure with a few more trips I will be ready. I look forward to leading my own team on more surveys, and to spotting more of the special wildlife around Scotland’s coasts!