Today we have a further insight into the contribution volunteer citizen scientists make to marine conservation in Scotland. Our guest post today comes from Natalie Hirst, a coordinator for Seasearch Scotland. Seasearch is a project for volunteer sports divers who have an interest in what they’re seeing under water, want to learn more and want to help protect the marine environment around the coasts of Britain and Ireland. The information collected by Seasearch divers is helping us to map out the variety of life found on Scotland’s seabed.

This year Seasearch is celebrating its 30th anniversary, and its been a record year so far running courses to introduce divers to underwater recording with Seasearch.

Over the last weekend of April, 12 of us gathered for an Observer course in COAST’s shiny new office building in Lamslash Bay.  The weather was too gloriously sunny to be in doors and to make things worse a pod of Orcas, or killer whales, had been sighted in the Clyde. All credit to the participants though, they ignored the sunshine, looked at the social media pictures of Orca chasing ferries only occasionally and settled down to listen to Dawn,  Rob and myself enthusiastically describing what is probably the largest citizen science marine recording project in the world.

It was a mixed group, with some people from Arran and others who had traveled up from England specifically for the course. There were experienced divers with thousands of dives, and snorkelers with no intention of taking up SCUBA diving. A few made their living taking out sports divers, while others just loved diving and the sea and wanted to know more.

The course followed the usual format, beginning with an overview of some of the major marine conservation challenges we face today, then leading on to the role of Seasearch in providing data for effective marine management.

Mid morning and early afternoon were occupied with describing different types of seabed and trying to bring some sense of order to the often overwhelming diversity of life seen on a dive.  After lunch I showed the group videos of actual dives and they all had a go at filling in a recording form whilst sitting in a nice warm room. All too soon it was 5pm and after covering a lot of material everyone was looking a little shell shocked but looking forward to diving the next day. 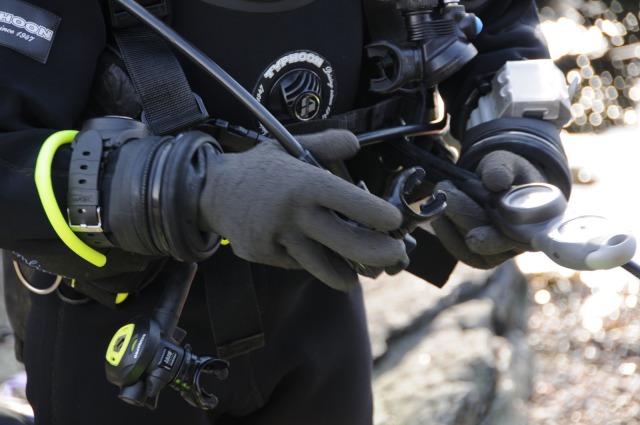 I want to say that the next day dawned bright and sunny, but it didn’t. It was cold, grey and damp. Undeterred, the group met up and prepared to enter the water. We were diving on the edge of the Arran no take zone in very shallow water but it was an area rich in life. The first boulder I came to hosted seven different types of seaweed,  along with anemones, crabs and shrimps. There was so much to look at that most pairs of divers didn’t stray very far from the start point.

After 30 minutes we all emerged, changed and headed back to the COAST building for hot drinks and form filling. In the afternoon we did the same again: this time one of the divers surfaced asking if anyone else had heard the Orcas!  I had heard something underwater but I suspect the sounds were more to do with a warship, part of a large naval exercise which entered the bay as we were diving.

Back at the base a second recording form was completed and the group prepared to depart, some rushing for the ferry, others on a RIB and the lucky Arran folk on foot. It was a great weekend and as usual I felt privileged to have helped such an enthusiastic group open their eyes to the wonderful diversity of marine life on our doorstep.

A massive thank you to Community of Arran Seabed Trust (COAST) for providing the training venue. Please visit the websites for more information on the work of Seasearch and COAST.