Parkhill farm has been in Roger Howison’s family for 117 years; over 215 hectares of mixed farmland rolling down to the banks of the River Tay and originally farmed by monks from the nearby Abbey.  Our Rural Resources Graduate Kristen Brewster visited the farm recently. Here, she tells us what she learned.

Upon returning with wife Rachel to Scotland from Toronto, Canada, to take over management of the farm in 2011, Roger has been able to reassess what the land can offer.

Creation of native woodland has been a priority, with one hectare of new trees planted in 2017 and another 7 hectares to be planted in 2018/ 19 as a result of support from The Woodland Trust for both advice and funding. This will create corridors of native species that will act as both habitat for wildlife and shelter for the sheep and cattle that spend the winter there. As part of the greening requirements for the 5% Ecological Focus Areas the farm makes use of field margins and buffers creating bigger wildlife corridors.

The agroforestry system at Parkhill farm. 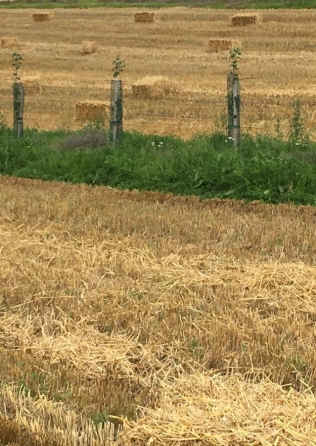 The agroforestry system at Parkhill farm.

The nearby village of Newburgh has a historic tradition of heritage apple orchards, and the family has also made an enthusiastic move into apple growing. The project has been one of great excitement for Roger and family who, after researching agroforestry systems, settled on rows of trees 27 metres apart so that malting barley could be grown in between. Although this produces a lower yield than a typical apple orchard, the flow of air between trees in this open system means that they won’t have to use many pesticides such as fungicides.  It is thus more environmentally- friendly and requires lower input costs.

It’s also an extensive system of apple production with only 5% of the field area being lost. Each row of apple trees has been meticulously spaced out by hand and sits on a strip of wildflowers to benefit pollinators. The field also incorporates a large patch of clover and Roger hopes shortly to install beehives; a benefit for both production and nature. Close at hand for advice and support are the Newburgh Orchard Group and volunteers from the Fife Coast and Countryside Trust and local schools.

This venture has sparked another idea and now the family hope to move into beer and cider production by creating a brewery on the farm. The aim is that the facility can be fairly self-sustaining through utilising the fresh natural spring water that flows on site and malting barley grown on the farm and soon, their own cider and heritage apples; Roger has even been growing hops in the garden! The family are currently in the funding phase of the project with the building permissions approved. There is ample opportunity here due to the Fife Coastal Path, which runs through the farm and the proximity of the famous Lindores distillery just a few minutes’ walk away. 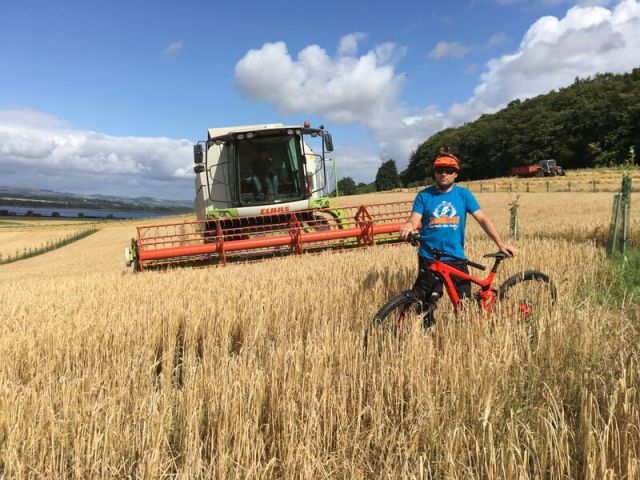 This is not the first foray into diversification for the family; the farm plays host to an annual weekend-long family- friendly festival that allows them to share their passion for mountain biking with others. ‘The Eliminator’ Mountain Bike festival gives participants the chance to race head to head downhill through woodland and across the field of apple trees and barley. With a degree in Hospitality and Tourism and his years of experience, Roger has devised entertainment for even the non-bikers in the form of yoga, live music, craft drink bar, food pop-ups and even a silent disco!

Awareness of the uncertainty surrounding the future of agricultural support has prompted the family to plan for a future without the Basic Payment Scheme as a source of income. More permanent holiday accommodation is being considered in the hope that a diverse business will provide options for the couple’s children to make a living on the farm.

Changing times has been a theme of my visit to Parkhill and Roger explains that he was recently involved in considering the future potential of flood prevention along the river front towards Newburgh. The high riverbank was actually built by Napoleonic prisoners of war and many of Parkhill’s prime arable fields once sat under water. With changes in the global climate perhaps once again resulting in flooding in areas such as this Roger is open to considering land sacrifice as a means of restoring balance. Future funding for environmental goods could assist in such an approach; Roger explains that he has previously avoided the Agri-Environmental Climate Scheme due to the cost and complexity of applying despite the adjacent Tay Estuary SSSI.

Walking back to the farmhouse, the landscape stretches out ahead in the late afternoon light and the potential of this farm for reinvention seems endless…