#Cycle for Nature – The Isle of Rum

One leg, five offices and 200 miles now behind her, on Monday Francesca set off on leg two of her ultimate active travel challenge.  Here she updates us on a fascinating trip to Rum National Nature Reserve.

#CycleForNature resumed with a bang on Monday! A visit to Rum and my first visit to the Small Isles. It was a stunning day ‎and my voyage of discovery began on the ferry, where National Nature Reserves (NNR) manager, Ian Sargent, told me about the wildlife on and around Rum. This includes the fascinating Manx shearwater birds which migrate from South America to breed on Rum, where they burrow. No Manx shearwater were spotted today, although I did see plenty of divers and (on the return journey) a solitary porpoise jumping through the waves. 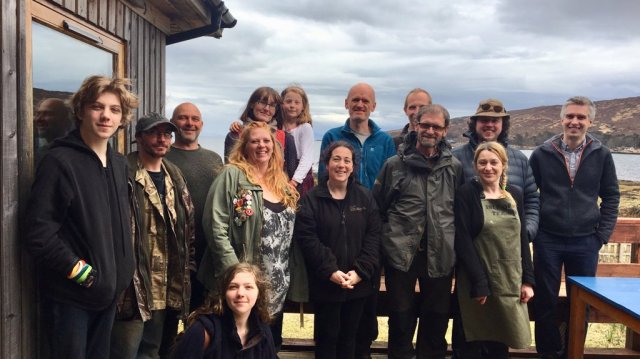 It was great to meet members of staff and the community on this fascinating island reserve.

On Rum I met the SNH and NNR team who make up four of the 23 adult residents on the island. I also met members of the community who discussed their aspirations for the future. Investment from Marine Harvest is underway and the islanders see this as a catalyst to much needed economic development on the island. That, the strengthening role of the Isle of Rum Community Trust, and the potential asset transfer of the Castle, could all combine to be a powerful force in the island’s future. I was struck by the positive outlook of the members of the community whom I met ‎and by the fact that the role of SNH staff is intertwined with the community. The degree of collaboration is very high,  which is essential for a sustainable future.

I was able to visit briefly the iconic Kinloch Castle. SNH is working with the Friends of Kinloch Castle Association to ensure a sustainable future for the Castle, through a community asset transfer, which will be an important element of the island’s future success. Accompanied by expert SNH guides, Lesley, David and Colin, I also had a quick visit to Harris, site of the mausoleum of previous Castle inhabitants and also a herd of ponies who are put to work in the deer stalking season. It was then a race back to the ferry (we made it!) before a picturesque sailing back to Mallaig.

A fascinating visit to a fascinating island. Tomorrow I head to another great island – Skye.