#CycleForNature – From Hamilton to Dunoon

After an excellent first two days and having reached Hamilton in her first update, the schedule for day 3 of Francesca’s #CycleForNature was packed with visits to local projects that SNH supports. Let’s hear how the rest of the week went!

After a discussion with staff in the Hamilton office, four of us set off to the nearby Chatelherault Country Park where SNH works with South Lanarkshire Council and the Clyde and Avon Valleys Landscape Partnership to enhance the value of the park for local residents and visitors. This includes path restoration, supporting volunteers, education and enhancing the Park’s biodiversity. We went on quite a long walk (this was risking becoming a duathlon!), ably led by Malcolm Muir of South Lanarkshire Council, to see all that the park has to offer and the on-going work. 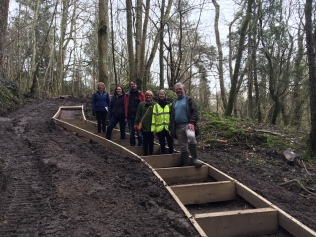 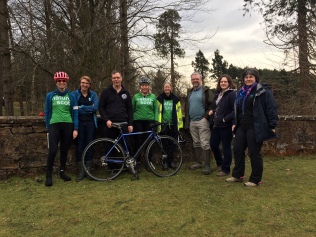 With Malcolm Muir, South Lanarkshire Council, and colleagues, where we chatted about the societal benefits of nature and path restoration,.

It was then the relatively short hop by cycle to the ‎Seven Lochs Wetlands Park, the flagship project for the Glasgow and Clyde Valley Green Network Partnership. After meeting a range of partners involved in the project, we set off, by bike, with Scott Ferguson, project manager, to learn more about the area. Scott’s a dab hand on a bike and we got a different perspective of the vision for the Seven Lochs as he took us around the off-road tracks and paths in the area, pointing out the different elements of the work that’s going on. 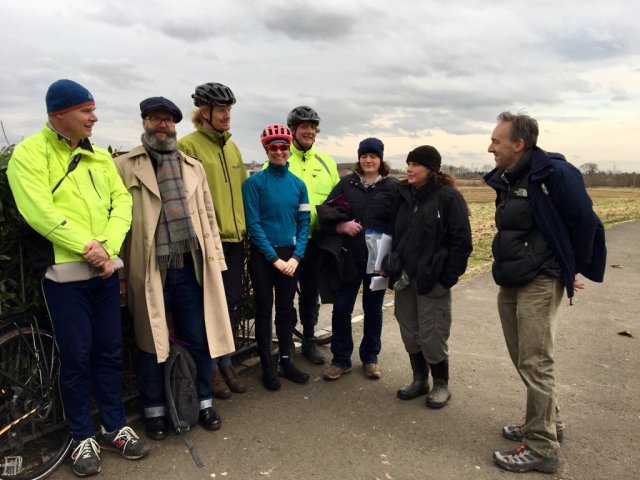 On the way, we met partners from Glasgow City Council supporting the North East Glasgow Water Vole Project. North east Glasgow houses an unusual population of water voles: unusual as they are grassland rather than water dwellers. I learned about the work that SNH and Glasgow City Council are doing to understand more about this important population.

Then on to Clydebank, with SNH colleagues who were able to point out Green Infrastructure Projects as we went. I’m trying to use the National Walking and Cycling Network as much as possible and the route to Clydebank was mainly off-road, alongside the canal. A very pleasant end to the day. 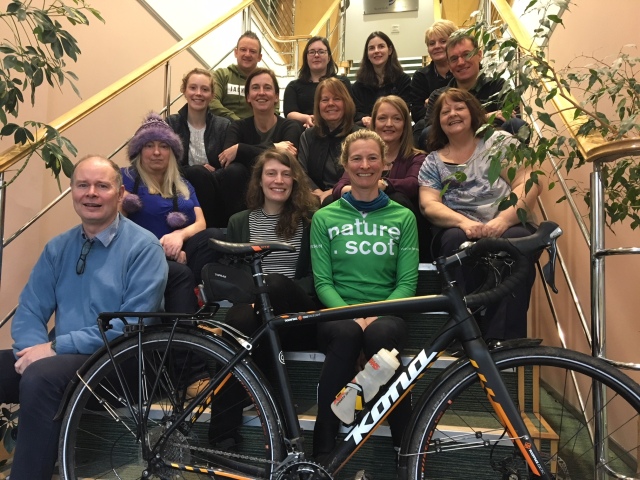 With our team at Clydebank

I’d been lucky with the weather up to this point and day four saw a change. I met with colleagues in the Clydebank office and then set off to Gourock. It was wet and windy. I only saw later the high winds warning for the Erskine Bridge. But, the wind was behind me (a minor miracle) and I managed to catch an earlier ferry from Gourock to Dunoon. I arrived slightly damp to the SNH Dunoon  office where I had a warm welcome and good chat with SNH colleagues there about the issues in the area.

Day five and I’ve explored some of the area around Dunoon with SNH colleagues. First stop was the Benmore Botanical Garden and on the way I learned about a range of  landscape issues, for example balancing commercial forestry and more native species. We then went to the SSSI at Loch Eck where we talked about the declining population of Atlantic Charr and our work to understand the reasons for that. We also discussed some of the development issues in the area, ‎including wind farms.  I kept my eyes open for golden eagles, to no avail. I assume they were taking the sensible option of sheltering from the wind and the rain. 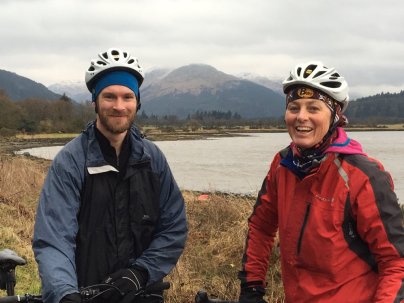 Exploring the Cowal Peninsula with colleagues

My first of nine ferry journeys took me to Dunoon

That’s the first week of #CycleForNature over. I’ve covered just under 200 miles on the bike, but more importantly, I’ve met a lot of new SNH colleagues and met a range of SNH partners and learned a tremendous amount about the wor‎k that we do together. Roll on week two!

#CycleForNature is raising funds for the Scottish Association for Mental Health.