The 2017-2018 SNH graduates took to the Scottish Highlands in a cold December to learn more about reserve management, and volunteering at Creag Meagaidh National Nature Reserve. Steven Sinclair, our Year of Young People 2018 graduate, provides a narrative about their visit.

The graduates were given a tour of the reserve, and helped with daily volunteering tasks including feeding the resident reserve animals © Steven Sinclair/SNH

Saturday 9 December 2017: The weather forecasts weren’t promising with threats of Storm Caroline bringing the UK to a standstill. A hard and bitter wind whistles through the treetops surrounding Newtonmore. The snow is thick, and largely untouched on the hostel lawn. Newtonmore is a small village adorned with a cold, winter silence, a hearty Highland population and an impressive array of icicles seldom seen further south. A relaxed and restful evening and substantial morning breakfast at the Newtonmore Hostel sets us up nicely for our first day.

Meeting together for the first time in October for the Graduate Induction, we collaborated closely to design, plan and pull together two days to explore several objectives: firstly, to strengthen the social bonds and foster working relationships within the group. Secondly, to learn more about highland NNR management and the benefits of nature conservation to the Scottish Highlands. Next, to learn about and contribute to the varied volunteering endeavours which occur on the reserve, reputedly attracting individuals from all over the country, and indeed, Europe. Finally, to explore how various themes arising within our graduate placement projects (farming, engaging young people and wildlife management, to name a few) lie within in the context of Creag Meagaidh.

It takes us approximately thirty minutes to get to Creag Meagaidh NNR. Evereything is blanketed in white and shrouded in an alluring curtain of mist, admittedly we don’t quite know where we are and realise soon that the main office and house is another five minutes up the drive. On a clear day, you can see the main building and its array of out-houses nestled on a remnant outwash plain of the Ilt Dubh and several small tributaries to the north-east of Loch Laggan. 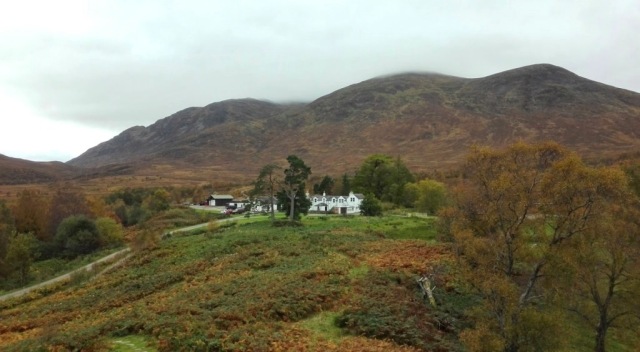 On a clear day, you can see Creag Meagaidh’s main building and its array of out-houses nestled on a remnant outwash plain of the Ilt Dubh. © Tay Davies/SNH

We are greeted by Rory Richardson, reserve officer and former member of the army – punctuality is key, and we’re already late! We’re also greeted by a band of young volunteers. After introductions, with a cup of tea or coffee in hand, we learn of the history of Creag Meagaidh, the role of conservation on the reserve, and about the various volunteering projects currently underway.

To highlight the significance of the NNR, we are given the opportunity to tour the lower reaches of the reserve, learning about various habitats and ecosystems the area offers, daily volunteering tasks including stocking up bird feeders, feeding the ponies and highland cows, and breaking frozen pools in the fields so the animals can drink. The volunteers hail from a variety of corners – one is Dutch; two are from France, and two are visiting from England on short university placements. 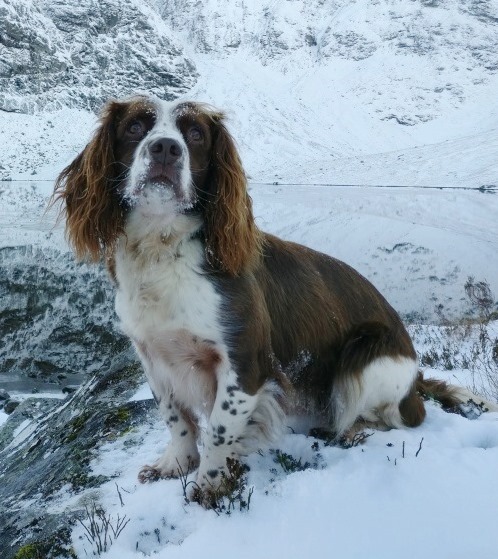 Dìleas, the resident dog, kept up with the graduates with ease while always being happy to take on a photo opportunity. © Tom McKenna/SNH

The high point of day one was the chance to take part in a reserve patrol to the Lochan an Choire – no less than a 4-5 hour walk. The weather was spectacular, clear with a comfortable crisp wind to keep everyone alert. Tay Davies, one of the volunteers, accompanied by the reserve spaniel Dìleas (Gaelic for ‘loyal’), tells us about his interest and involvement in deer management, spotting with a keen eye a herd watching us warily from high above as they migrate to the summit ridges. He continues, and expresses his passion for the Highlands, telling us with fervour that he’d like to relocate to Scotland to work in conservation.

The hike culminates with our arrival at the Lochan a Choire, three outstanding Munros reflected in the glass face of the corrie loch. Photography opportunities abound, it’s difficult not to acknowledge a deep personal sense of responsibility for Scotland’s nature; a love for its beauty and variety of wildlife; and the overwhelming drive to inspire others to get outdoors, and to protect their natural environment.

Lochan a Choire and the sheer cliffs of Coire Ardair, at the foot of three munros. © Steven Sinclair/SNH

Later that evening, back in Newtonmore, we are lucky enough to be joined by the reserve volunteers for a well-earned dinner. We encouraged those visiting Scotland to sample the whisky and haggis, both of which were greatly appreciated: a vital networking opportunity, and introduction to Scottish heritage, of course!

This blog is the first of a two-part contribution by the SNH 2017-2018 graduate intake. Part 2 will be released shortly – stay tuned. To learn more about the current graduate placement projects, read the Graduate Induction piece here.

You can read more about Creag Meagaidh NNR here and also in a 2014 blog contribution, found here.