As slow as it gets

Seasons would be boring but for their interstices. So says Jim Carruthers, our gardener at Battleby, as he shares his autumnal musings with us. 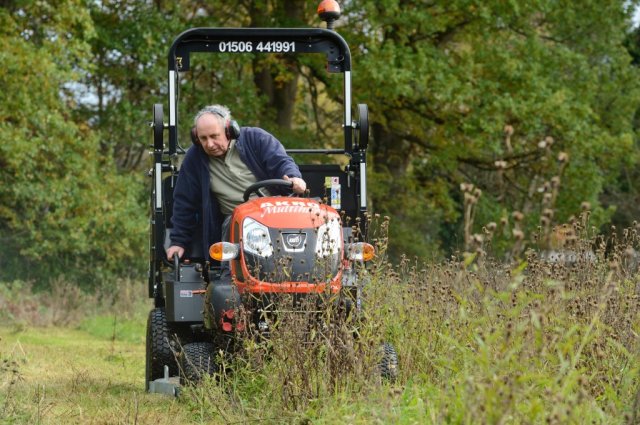 Winter into spring goes back and forth like a bout of boxing or basketball. There is disappointment when the vitality of spring erodes into the badlands of summer. The passing of summer I await with glee, given the prospect of no, or at least, less grass-cutting, the making of leaf-mould not war, the ripening of apples and the joy of proper maincrop tatties. Not to mention the autumn colours. Autumn into winter is as tantalising as winter to spring is frustrating.

Now as the summer rains dissipate halfway through autumn, you can at last start to appreciate the autumn colours here at Battleby. The best performer this year is undoubtedly the liquidambar. I’ve had little chance to bathe in its colours such is the kerfuffly crisis that wet summers and autumns create. Grass doesn’t just grow it erupts. The brambles I brutalised in July lasso me in September. The path-side shrubs grow as fast as bamboo. The verges have to be mown again, another final time.

Hairsts are stalled, whole fields of tatties condemned to death by drowning, howts even farmers are helping each other, something I’ve no seen lang syne.

David Brown, sic a proper tractorman he had a tractor named after him, usually cuts our splendid wildflower meadow. But the toll of these rains has meant he cannae do it this year.

Thus it came to pass when crisper autumn conditions appeared a fortnight ago, we sprang into action and hired a Korean tractor, a Kioti, complete with logo of a coyote, doubtless adopted for the American mid-west market. 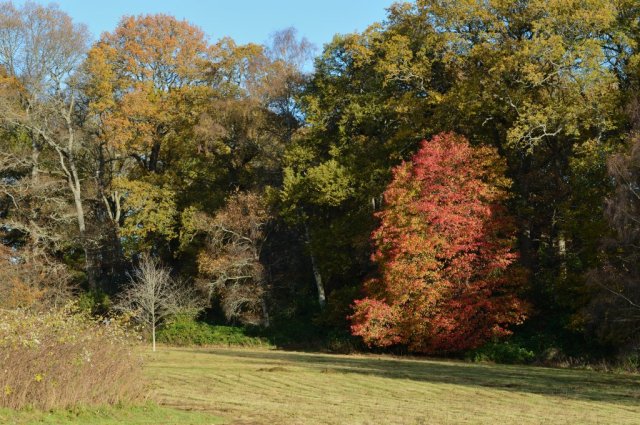 Suddenly I was afforded the chance to keek wholesale at the liquidambar. The ridiculous thing about this tree is that it is actually two specimens planted verra verra close together, certainly no mair than 1.5 m apart centre to centre. The result of this, another eccentric planting by former owner Sir Alexander Cross, philanthropist and plantsman, is a bewildering spread of a beast. Usually it has a pyramidal shape like a holly. Often mistaken for a maple because of the richness of its autumn colours and the lobed foliage, it is however easy to identify as all maple species have buds and leaves opposite each other and those of liquidambar are staggered or alternate. Hamish Kirkmichael, one of this year’s new visitors, was visibly horrified when I pointed it out. He had just given a friend a present of a liquidambar for their front garden.

Someday the cutting will be finished, in the meantime it’s a case of stravaiging over the meadow as slow as possible. There are three gears on the tractor, saunter, stravaig and steg. Some tractors have an auxiliary shift between muckle and meikle. Sauntering produces no progress whatsoever, you could fall asleep in saunter and just no ever crash. The aim is to keep stravaiging as close to sauntering as possible. Steg is just so too fast. Think Kershaw, SNH’s intrepid ultra man, not Bolt. The momentum gained from going downhill produces too much speed and there it is another stramash in the grassbox as fast wet cuttings form ingots that refuse to yield and budge up. The chute clogs, the cutters clog and the coyote conks out. Steg can be used when emptying the box, a great boon when travelling as the saying goes. The result is a tango rhythm: slow pass slow pass quick empty quick return slow sett. And with the daundering but certain progress of this tango, dwams can appear, slow food and aimless travel dawn under the evolving skeins of geese.

Bung gunk into pot, bung pot into oven @120 C. and retreat into a good book over a pot or two of tea. Take the lid off at halftime two hours later. Reading, like pomegranates, is one of winter’s great consolations. At the now, Paul Theroux is on a slow train to Kandy. Quite the opposite of a sugar rush. Pomegranates have just come into form. One I bought a fortnight ago was so underripe the arils looked like teeth and were just as inedible, he said assuming teeth were inedible. Three nights ago, however, a specimen exsanguinated over the chopping board, the worktop, the knife dreeping onto the floor. I was deliriously happy. The French word for pomegranate is grenade, a sure example of interaction between English and French.

November continues to be dry, each dry week a cause for celebration, not for the contrast to September and October but because these weeks carry us free of dreich and gloom deeper in to the heart of darkness, the half-way line of the winter solstice. Each dry week, each glimpse of sun, however watery, reduces the physical congestion of homes, alleviates the burden on mental health. Less loud now the screwed-up noses and wersh voices of “Aye, the nichts are fair drawin’ in”.

That rhodie that dares to encroach upon the liquidambar is getting the full bash this winter.

I’ve started an offensive against the sprawling horror of the ponticum that taints well-behaved civilised rhododendrons. The one away to attack the liquidambar will be dealt with long afore the solstice, no reck, no ruth, a chokehold and a flash of steel. Clicky ba’. Here’s to a crisp winter which will engender success in this offensive. Success will allow the bluebells to spread, the squirrel-inspired hazel seedlings to mature, rowans will have more space. The oak cohorts will increase, forming centuries.

Hard winters encourage progress in large gardens. Here the other seasons are too caught up in chores and maintenance to afford any substantial developments. Wet winters encourage clart and clart throttles progress.

This meadow lark has certainly had its moments. The bogey developed a slow puncture, the fuel tank ran dry, yesterday my hay rake broke; rather than vigour it was the woodworm wot did it. Well it was about 40 years old. The previous Saturday, the coyote sank into the clay of Soggy Bottom corner. So no cutting uphill now either.

Moving across the slope now, back to the liquidambar, a smirr of midges in attendance. Combined with the tedium, noise and lack of comfort, it should be dispiriting but the coyote is cooperating and a wee flock of goldfinches leap like porpoises up from the knapweed stems diving back down only a few metres in front of the coyote. This goes on for almost the whole length of the drill.

As much as the goldfinches go forward, the voles go sideways wriggling under tussocks reappearing for a flash some feet later.

A buzzard circles low overhead and a sentinel jay alerts the rooks inside the oak wood. A couple of them fly out to mob the buzzard and it flaps away, leaving the voles safe for now.

Slow food has prompted a memory from the train station in Llerida. I watched an old lady eating an orange in the heat of the afternoon. The whole exercise took over half an hour with a knife and cloth napkin. She painstakingly peeled each individual goose till it was free from the most slender filament of pith. From the bar Rodrigo accompanied her. His guitar concerto of Aranjuez remains a favourite piece of music and I started to hum it as the passes went by and the tackling of Soggy Bottom loomed.

I minded now the old ladies visiting my childhood home. They would remove hatpins to pick their way through pomegranates; the slow dismantling stalled their conversation but not the warmth of their company.

In the end it ended fine. Soggy Bottom had dried out a bit and the coyote howled through the last pass. The sun had gone down behind the black-stemmed trees and a snell wind blew in from the north-west. I was cold and hungry. It was time to get home and get something to eat and fast.

Come and visit Battleby grounds whilst the beautiful autumn colours are still around, it’s open to everyone every day of the year. Find out where we are here.