Where have all the flowers gone?

Kate Holl, our woodland advisor, searches for the answer by exploring woodland in our neighbouring countries through a Churchill Fellowship.

My Churchill Fellowship really began back in 2012 in this little bit of woodland on the Isle of Mull deer-fenced by Peter Wormall in the 1980s. The fence had remained deer and sheep-proof all that time.  In the 30 years I have been a woodland advisor with Scottish Natural Heritage, I had rarely seen a woodland like this in Scotland.

This small wood was like a little bit of paradise. Here there was an understorey and a profusion of flowers. The sounds of insects and birds filled the air.

All of a sudden I realised something is missing from most Scottish woods… Several hundred years of deer and sheep browsing has left our woods without their “filling” – there is the canopy and the ground, but everything in between – especially the flowers – has been eaten out.

Our woods are like the “sandwich without the filling”!

As woodland managers and advisors we have for so long been focussed on getting tree regeneration that we have almost failed to notice that woods are actually much more than just the trees… Even if the trees regenerate, without all the other shrubs and climbing and trailing plants they will never be “woodland”; just… treescapes. Without the brambles, raspberries, blaeberries, ivy and honeysuckle flowers (and fruit) there is no food for the insects, small mammals and birds, and nowhere for them all to make their homes.

With this realisation I thought it could be interesting to visit woods in other parts of Europe where herbivore impacts are much lower and where the climate and geology is comparable to Scotland. I could collect evidence of how that space under the forest canopy is different, and what this difference means for the woodland and all that depends on it.

So this summer, with the help of a Churchill Fellowship over a six week period, I visited woods and met people in four countries spanning a range in latitude from south-west France to Iceland. I chose these places as they all have woodlands that are influenced by the Atlantic Ocean (which means they are wet and temperate), and are therefore comparable with our Scottish woods.

I visited woods that not only have few large herbivores in them currently, but which also have a history of at least several decades of low herbivore numbers, to find out how a woodland understorey looks when it is not constantly being eaten.

The best time to look at woodland flowers is in the spring when the trees are just coming into leaf, because later in the year when the woodland canopy has closed over, little light reaches the forest floor and the flowers have mostly completed their seasonal cycle. I wanted to compare the woodland ground flora in the four countries at the same stage of its seasonal development, and as spring comes earlier in France, my plan was to start in France and travel northwards following spring, reaching Iceland in July.

What I learned on my travels about woodlands that have few large herbivores in them was a bit of an eye-opener!

In the French Pyrenees I visited old growth forests of beech and silver fir which are mostly un-grazed, apart from the occasional roe deer and chamois in the winter. Because of the forest canopy, the flowers tended to be mainly in the clearings – but there were so many…

And everywhere in the forest there were shrubs and young trees – so, plenty of “filling” here:

There was also an amazing amount of deadwood, as the big old trees remain where they fall until they eventually become part of the forest again:

The Isle of Wight

Next I headed north to the Isle of Wight, which I was really keen to visit as I had been told there are no wild deer there, apart from a few escapees from a local deer farm! According to historical records, deer had been hunted to extinction on the island by the 1870s, and since that time, the woodland on the island has developed mostly in the absence of the impacts of large herbivores.

There were several things that really stood out for me about the woods on the Isle of Wight:

Firstly was the abundance of ferns. Many of the ferns that commonly grow in our woods are palatable and eaten by herbivores. But it was not until I saw the woods on the Isle of Wight that I realised just how much of this part of the woodland ground flora has been lost from Scottish woods. 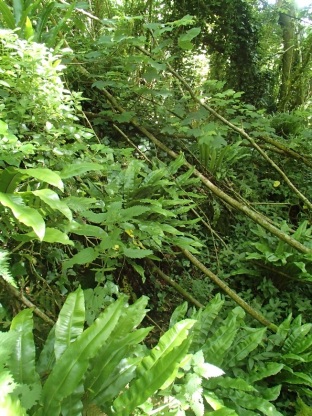 The Isle of Wight woods are luxuriant with ferns and climbing plants – it was a bit like being in the fern house of the botanical gardens….

The second realisation was that in woods that don’t have constant pressure from deer and sheep, trees just grow. So if you are managing a coppice wood on rotation you can expect to harvest timber after 10-15 years without having to spend any money on fencing or deer control. See below unprotected hazel re-growth and poles cut after 10 years with absolutely no expense:

Although hazel can be very fast growing in Scotland, young trees rarely get above knee height as they are targeted by deer and sheep.

I learned that the Isle of Wight is a great place for bats – all woods on the island have populations of the rare Bechstein’s bat, because their woods have an understorey. The understorey provides habitat for lots of insects, which is good for the bats which feed on the insects. Bechstein’s bat is now one of the UK’s rarest bats having previously been one of the commonest species, due mainly to the loss of ancient woodland, but probably more specifically to the loss of the woodland “filling”! The understorey is also really important for species like dormouse and red squirrel, both of which are common in these woods – there are just so many places for them to feed and nest in the “filling”:

The next place I travelled to was south-west Norway, of special interest because the soils, climate, weather, and consequently the vegetation, are so similar to much of Scotland. While most people now think of southern Norway as a largely forested place, 100 years ago the hills here were as treeless as Scotland is today due also largely to sustained and prolonged overgrazing by wild herbivores and domestic sheep. For a variety of reasons, herbivore numbers crashed early in the 20th century and Norway experienced forest regeneration on a massive scale.

Today herbivore numbers are increasing once again, but there is now so much browse for them to eat that for the most part they make little impact, and there are still plenty of flowers and forest “filling” as you can see in the following pictures: 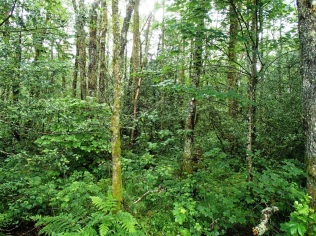 Ancient honeysuckle (which rarely gets to flower in Scottish woods) writhes around in the understorey:

…until it reaches the forest canopy where it bursts into a riot of flowers:

The last place on my itinerary was Iceland. In many respects this was the place I was expecting least of; after all, everyone has heard about the problems of sheep overgrazing and soil erosion in Iceland… Yet at the time of Iceland’s settlement around 1000 years ago, the country was described as being wooded “from fell to fjord”. Most of that woodland was cut down or lost to herbivore impacts over the next few hundred years, but today, as a result of a recent and dramatic reduction in sheep numbers (there are no wild deer – just a few reindeer) scrub woodland is gradually returning, spreading over much of the Icelandic countryside. I visited a number of woods on Iceland, all of which have been completely protected from herbivore impacts for nearly 100 years.

The flora of Iceland is poor compared with that of Scotland. Its woods are mainly birch with willow and rowan, and the ground vegetation generally lacks the diversity of our Scottish woods.

I had embarked on this Fellowship asking the question “Where have all the flowers gone?” and I found the answer in Iceland! I have never been in woods so full of flowers – the woodland floor was literally a carpet of flowers. Fruiting shrubs were common and the woods had amazing structural diversity: 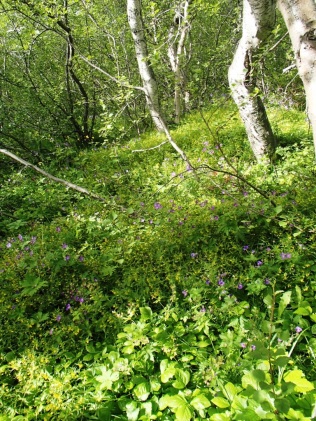 If this is what woods look like when they have been free of herbivore impacts for many decades, you really have to wonder about the role of herbivores in woodlands, and more especially what our Scottish woods might look like if we could only get our large herbivore numbers down…..

Last year I returned to the small wood on Mull to discover that the fence has been taken down, for it was considered that “enough” trees had regenerated and that it was time to restore grazing to the woodland and to let the deer and livestock back in. In the space of less than two years, much of that ecological richness that had taken over 30 years to develop had been completely wiped out. Apart from a few sapling trees, you would never know what abundance of flowering plants this wood had come to support for they had all been eaten or trampled into oblivion. The photo below shows the same spot, same time of year – all the flowers have gone!

You can decide for yourselves which of the two woods you prefer.

What I realised through my Fellowship is that Scottish woods could and should have far more flowers, and until we can bring herbivore numbers down to an ecologically “beneficial” level we will only ever have woodland sandwiches without the filling in Scotland!

And for anyone thinking about applying for a Churchill Fellowship themselves, (which I would strongly encourage you to do) – have a look at their website which gives lots more information about the awards and the application process.