Autumn gems in your lawn – our grassland fungi

Posted on October 9, 2017 by jimjeffreysnhgovuk

As we move deeper into autumn, with cooler nights and frequent showers, it becomes increasingly difficult to mow our lawns. It’s almost time to clean our mowers and store them away till the spring. However, lawns and other grassland areas across Scotland still have one final seasonal treat in store, an eruption of colourful mushrooms! In this post SNH’s own fungus specialist, David Genney, tells us about these autumn gems. 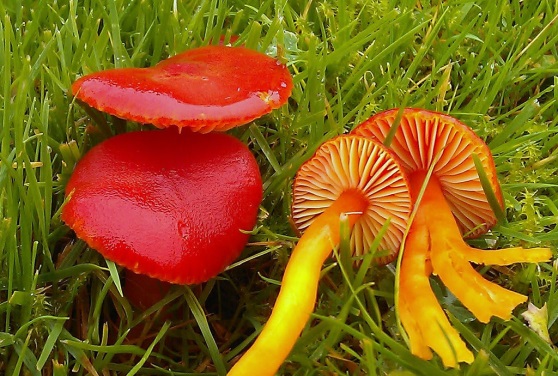 As one of the most colourful groups of grassland mushrooms, waxcaps are among the first fungi most people notice in their lawns. They are named after the thick waxy gills that sit below their caps.

They come in all sorts of colours as reflected by their common names – Scarlet Waxcap, Crimson Waxcap, Pink Waxcap, Snowy Waxcap and Butter Waxcap. One, the Blackening Waxcap, starts off a lovely yellow-orange colour and then gradually, over a week or so, turns deep black before shrivelling up and returning to the soil.

Waxcaps aren’t just visual treats because some have unusual smells too.  The Cedarwood Waxcap is a relatively inconspicuous white mushroom but has a rich smell of fresh pencil sharpenings, while the Honey Waxcap, you guessed it, has a lovely sweet honey smell at the base of its stem. 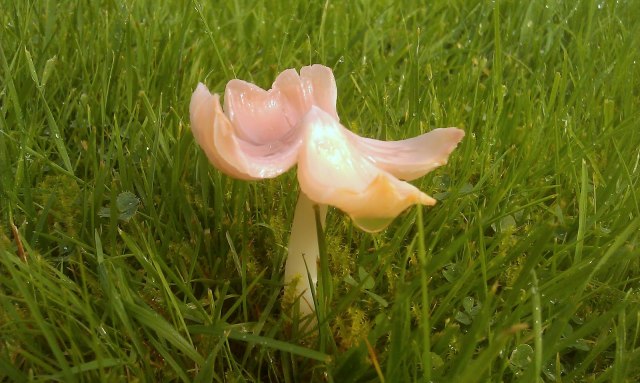 The Pink Waxcap is one of the most elegant mushrooms you’ll see.

Blackening Waxcaps are one of the first species most people notice since they grow in relatively new garden lawns.  However, if you want to see lots of different types of waxcap the best place to start is in old lawns.  Older domestic garden lawns, especially those that haven’t been fertilised or re-seeded for many years, might support five or six different types. The diversity really explodes in really ancient lawns such as those associated with historic buildings. For example, more than sixteen different types of waxcap have been recorded in the ancient lawns of The National Trust for Scotland’s Haddo House in Aberdeenshire! 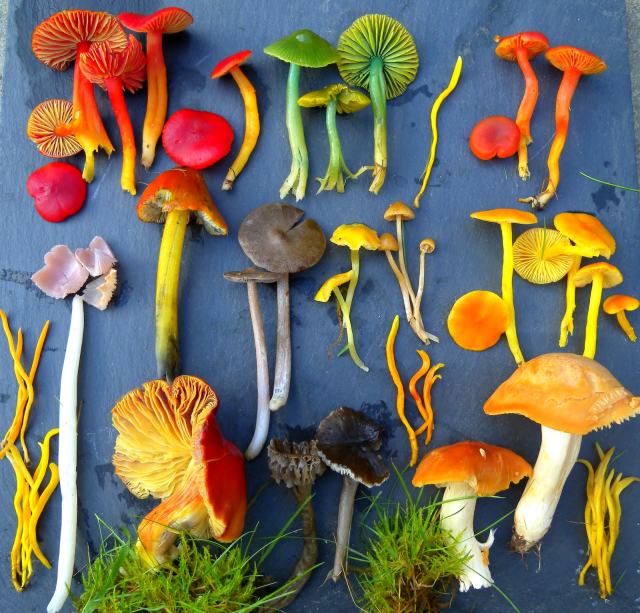 Old lawns are one of the best places to find grassland fungi as this collection from an historic castle lawn illustrates.

Not all lawn fungi are mushrooms.  You may be lucky enough to find clubs, spindles and corals too. These strange fungi rival the waxcaps in their variety of colours, from the deep egg-yolk hues of the Yellow Club to the delicate pink of the Rose Spindle. They come in a range of shapes and sizes too.  Corals get their name for the obvious reason that they share the intricately branched form more typical of tropical marine corals. Some, like the fragile White Spindles are small and elegant, while others such as Smoky Spindles form chunky tongues that twist and contort through coarse grasses.  As with the waxcaps some, such as the Yellow Club, are common and can be found in relatively new garden lawns. Others are rare and when found are tantalising indicators of fungal-rich ancient grassland. 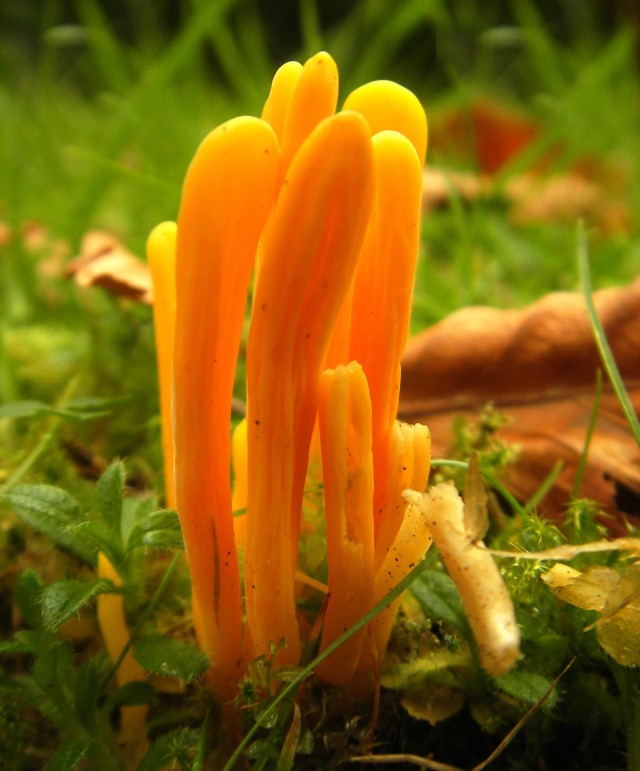 Beauty is in the eye of the beholder; however it has to be said, compared to the waxcaps, clubs, spindles and corals, earthtongues don’t excite our senses in quite the same way. Most are black but those who take the time to look will notice they have their own subtle array of shapes, colours and textures. The Glutinous Earthtongue, for example, is shiny black and slightly sticky while the surface of the Hairy Earthtongue is covered in tiny hairs that give it a matt-black appearance. Some earthtongues such as the Olive Earthtongue and rare Dark-purple Earthtongue, begrudgingly deviate from black, but are never over-stated, just there to be admired by those who appreciate subtle differences and the vast diversity of the fungal Kingdom.

The Hairy Earthtongue, found here in upland grassland on Skye.

Too many other types of mushroom inhabit our lawns to introduce them in this short article.  There’s the notorious Magic Mushroom which, while found in most garden lawns contains psychoactive substances and is an illegal Class-A drug when picked.  Others such as small, delicate Bonnets and little brown Bells are much less prominent than the showy waxcaps, but no less interesting when you start to explore their diversity. 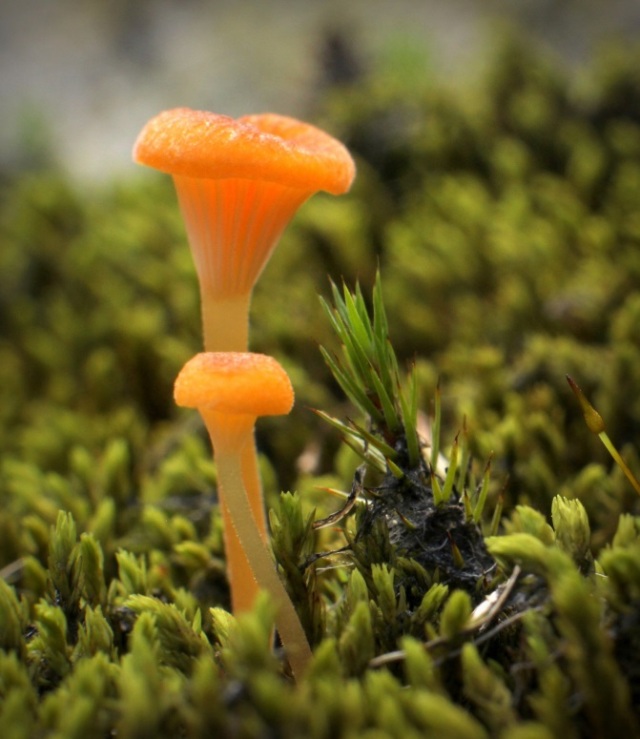 Looking after our grassland fungi

Places rich in grassland fungi are scarce, are globally threatened, and the number and size of these places in northern Europe has declined dramatically.  Relative to these losses, Britain still has a high number of waxcap-rich lawns and other grasslands, so you could say we have a particular responsibility to protect and nurture them.

Because fungi are primarily below-ground organisms it is all too easy to forget about them when they are not producing their above-ground ‘fruits’.  This can make them vulnerable to practices that inadvertently damage or even wipe them entirely.

While we still have a lot to learn about these fungi and their exact requirements, we do know that adding fertiliser, whether ‘weed and feed’, lime or lawn-sand, can have devastating effects on fungi.  Our best places for grassland fungi also tend to have been undisturbed for decades, or even centuries, which is why historic property lawns can be so rich.  Practices such as re-seeding or turfing are therefore likely to drastically reduce the number of fungi present. With a little care all of us lucky enough to have a garden lawn can nurture future species-rich grassland in our own gardens and avoid damaging those we already have.

Autumn is not a quiet time for our lawns. The grass may have stopped growing but it’s one of the most interesting times to go out and admire grassland fungi, our autumn grassland gems. Enjoy and cherish them!