Posted on September 5, 2017 by jimjeffreysnhgovuk

Until the 1900s, geologists assumed, quite reasonably, that layers of rock were laid down progressively, with younger rocks on top of older rocks. But there was a conundrum at Knockan. Here one billion-year-old sedimentary rock formed sat directly on top of much younger sedimentary rocks.

So how do we explain this?

Plate tectonic movements of the Earth’s crust is the basis for the explanation of this odd arrangement. It is now understood that, 425 million years ago, the landmass containing Scotland collided with another landmass that included England and the rest of Britain. The collision buckled and fractured the rocks of the north-west Highlands pushing, or thrusting, them tens of kilometres westwards over the younger rocks below.

These massive Earth movements of the so-called ‘Moine Thrust’ were first documented at Knockan. Today, geologists from all round the world visit to see where this geological process was first recognised.

What’s on offer if geology isn’t your thing?

As well as its geological importance, Knockan Crag is home to a wide range of plants and wildlife. Rock ledges on the Crag provide nesting places for birds such as kestrels and ravens, and the heathland and the sheltered grassy slopes beneath provide valuable grazing for red deer.

Knockan Crag NNR lies about 21 km (13 miles) north of Ullapool on the A835. Want to ditch the car? No problem, buses between Ullapool and Lochinver or Durness stop at the Reserve entrance on request. The reserve is open all year. There are toilets, a picnic area, car park and trails for different abilities. 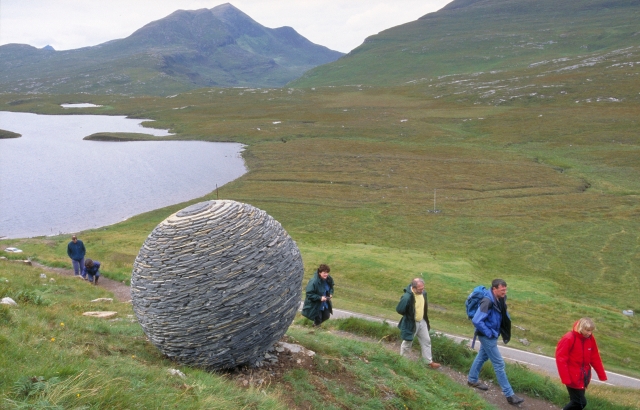 Can you tell me a little about the trails you have at Knockan Crag?

Sure, all of our trails start from the car park; either climb the steps or follow the all-abilities trail to the Knockan Wall. From here there is a wide, generally at path suitable for wheelchairs and pushchairs to the Rock Room. From the Rock Room there are three options for walking around Knockan Crag NNR.

Crag Top Trail will take you past the Moine Thrust and along the top of Knockan Crag for superb views of the Assynt mountains. The route has some steep climbs, but it’s a good path and clearly marked. Allow about 1 hour.

Thrust Trail takes you to the place all the fuss is about — the Moine Thrust — where you can bridge 500 million years with your bare hands. From here you can return to the car park or continue on the Crag Top Trail. The route is clearly marked, with a short climb up steps to the Thrust itself. Allow 30 minutes.

Quarry Trail is an easier option and this takes you part of the way to the Thrust, then doubles back before the path starts climbing. Allow 20 minutes.