The Isle of May opens the doors to its buildings

Posted on August 31, 2017 by jimjeffreysnhgovuk

The Isle of May features in the East Fife Doors Open Days this weekend. As well as its spectacular wildlife, the Isle of May National Nature Reserve has a rich cultural history.  As Sarah Eaton explains, a Doors Open event this weekend (2nd and 3rd September) offers a unique chance to see inside the island’s buildings and to learn about its fascinating human history.

You will be able to see inside the 200 year old Stevenson lighthouse, the impressive engine rooms and the accommodation where SNH reserve manager David Steel and his staff and live when they are working on the island.   There will be guided walks on the wartime history of the island and on its archaeology.

Also on show will be artefacts which were excavated from the island in the 1990s and which chart the long religious and cultural history of the island.  Set up to mark this year’s Year of History, Heritage and Archaeology, the free exhibition is housed in the Main Lighthouse with items on loan from the National Museum of Scotland.

Excavations revealed an amazing story of 1000 years of Christian community on the Isle of May. The island was an important centre of the early Christian church long before St Andrews. 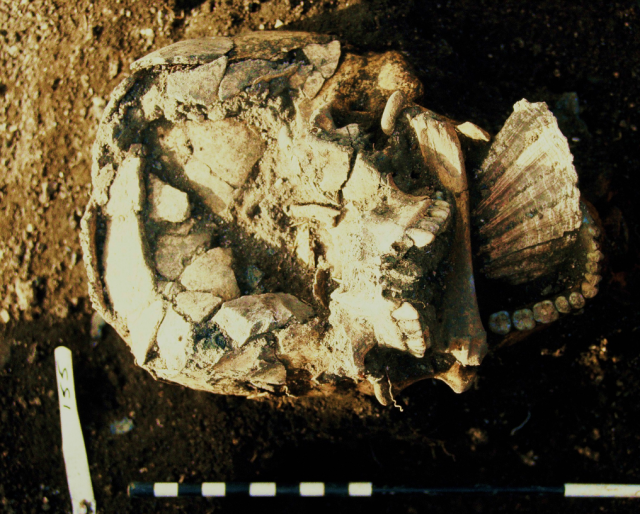 This pilgrim was buried with a scallop shell in his mouth, a symbol of his piety.
Photo: ©Fife Council Archaeology Service

One significant discovery was the remains of a pilgrim buried around 1300, with a scallop shell placed in his mouth.  He is thought to have been in his 20s and was buried in a favoured position in front of the high altar. The scallop shell was the symbol of pious pilgrims who had travelled to the great shrine of St James at Santiago de Compostela in Spain. This man may have made that pilgrimage, returned to his monastery on May island and died soon after.

A missionary named Ethernan ministered to the Picts of Fife from the May. According to the Iona Chronicle, he died and was buried on the island in 669 AD. Ethernan’s place of burial attracted many pilgrims. Some died here and were buried in the sacred soil.

Between the 600s – 900s many pilgrims were buried on the island in stone-lined cists, purified with shell sand and ash, and covered by capstones. Their bones showed that most had been seriously ill.

The remains of the chapel.
Photo: ©Lorne Gill/SNH

In about 1145 King David I founded a new monastery on the May with thirteen Benedictine monks. The monks built a much bigger church and cloister over the old church and cemetery. They had an income from the famous fisheries around the island and from estates on both sides of the Forth. They introduced rabbits to the island.

During the Wars of Independence in the 14th century, the monastery was uncomfortably exposed to raiding warships from both England and Scotland. It was soon abandoned. The monks moved to Pittenweem apart from one who stayed to welcome pilgrims and tend the shrine.

The main buildings on the island today are the lighthouses.  The former keepers’ cottages on Fluke Street are where SNH staff and seabird research workers spend up to nine months of the year. Come the winter, Fluke Street is home to researchers studying the grey seals.

The May was the site of Scotland’s very first lighthouse, built in 1636.  Known as the ‘Beacon’, the building has a tragic, romantic history.  Originally over two storeys, the Beacon had a flat roof on which there was a large grate to hold the huge pile of burning coals to guide ships in the Forth.  The ashes from the fire were thrown to the ground and in 1791 the lighthouse keeper, George Anderson, his wife and five of his children were found dead, having suffocated on the fumes from the ashes, which had drifted into the building.

Alarmed by the lack of a fire coming from the Beacon, a rescue party was sent from the mainland. One of the children was found to have survived – a baby girl suckling at her mother’s breast.  That baby girl married one of her rescuers when she grew up, and went on to have 12 children of her own!

The imposing Stevenson Lighthouse on the Isle of May
Photo: ©Lorne Gill/SNH

The current lighthouse, the Main Light, was 200 years old last year and was designed by the engineer Robert Stevenson. Its ornate, castle-like appearance forms an imposing structure on the island.  It is now operated remotely from Northern Lighthouse Board offices in Edinburgh.

Isle of May NNR – information on visiting during the Doors Open Day events.

Find out more about  Doors Open Days across Scotland.