I was tempted to title this article ‘Dragons of Wester Ross’, but didn’t want to mislead Game of Thrones fans. Alas, the dragons I shall be discussing here are not the mythical, fire-breathing reptiles of the imaginary land of Westeros, but the dragonflies and damselflies of Wester Ross in the Northwest Highlands of Scotland – more specifically those encountered during my surveys at Beinn Eighe National Nature Reserve (NNR). Although our dragons are a little more mundane than their mythical namesakes, they are at least real, and once you see them up close, certainly no less magical.

Dragonflies and their smaller, more delicate cousins the damselflies, are colourful, predatory insects belonging to the order Odanata. Able to hover, fly straight up, down, or even backwards, they are undisputed masters of flight. They make a valuable contribution to the ecosystem and to human health, by helping control populations of smaller flying insects, including the dreaded Highland midge. Freshwater habitats play an integral role in their life-cycle, as they can only thrive in un-polluted, well-oxygenated freshwater, so they are important indicators of freshwater quality and the overall health of an ecosystem.

Dragonflies have a three-stage life-cycle from egg, to larva, to adult. They lay their eggs, or oviposit, in freshwater, often in small pools or the rippled edges of streams, maximising their chances of success by choosing varied locations. Once hatched, the larva will spend the bulk of its life (anything up to 5 years depending on species) in its aquatic environment before emerging as an adult. The transformation begins with the larva choosing a warm, sunny day to climb out from its pool via a stalk, then its exuvia (larval exoskeleton) will split open, and from the tiny space within, the adult dragonfly will gradually emerge. It takes around three hours in this vulnerable position for the adult dragonfly’s body to fill out and for its wings to stiffen, before it can make its maiden flight. Once emerged, the adult dragonfly’s lifespan may only be a matter of weeks, during which time it will seek a mate to continue the life cycle. 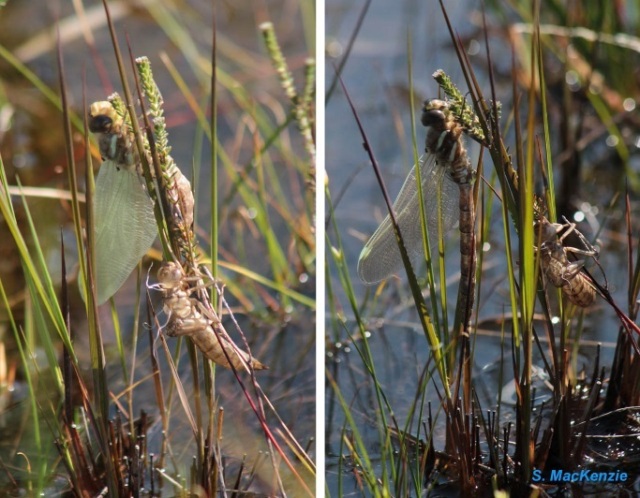 A hawker dragonfly emerging from its exuvia as it undergoes transformation from larva to adult. © Stuart MacKenzie

Located at the eastern extremity of the Torridon mountains, on the edge of Loch Maree, Beinn Eighe NNR comprises a rich mosaic of habitats, from fragmented ancient Caledonian pine woodlands, to wet heath moorland and blanket bog. Numerous burns, lochans and pools provide the perfect conditions for a range of dragonfly species. Common hawkers, common darters and the golden-ringed dragonfly are most common here, while rare priority species include the azure hawker, white-faced darter, northern emerald and keeled skimmer.

Dragonfly species are split into five general groups – hawkers, darters, chasers and skimmers, with damselflies being the smallest, and the weakest fliers. The largest are the hawkers, typically seen patrolling back and forth along a water body as they hunt for prey. Occasionally seen at Beinn Eighe, the azure hawker is a particularly stunning blue dragonfly that is found nowhere else in the British Isles other than Scotland. It can be tricky to tell apart from the common hawker, but there are a few differences. While both species have alternating blue and black/brown stripes along the body segments, the front wing vein or costa on the common hawker is a golden-yellow colour, while the azure hawker has a brown costa and much thinner abdominal stripes. Although both species share similar habitat, the common hawker prefers deep pools for its breeding sites, while the azure hawker prefers small, shallow bog-pools thick with peat.

Easiest of the hawkers to identify is the golden-ringed dragonfly. Visually impressive with distinct black and yellow ring markings and bright green eyes, the female of this species is the longest dragonfly found in the British Isles due to her long ovipositor. 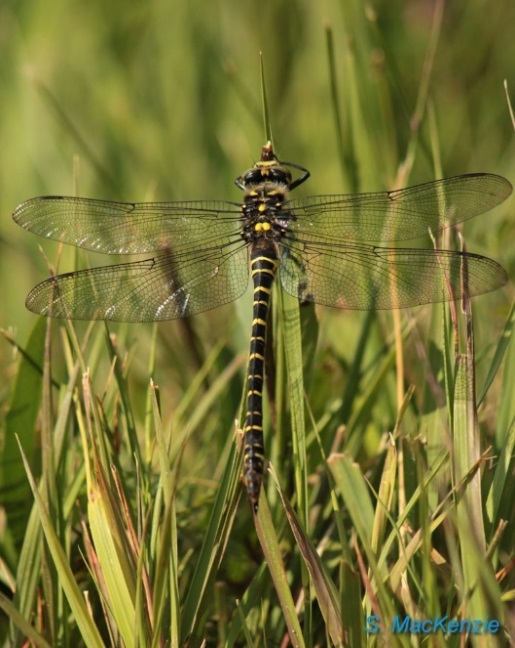 The female golden-ringed dragonfly is the longest dragonfly in the British Isles. © Stuart MacKenzie

Darters recorded at Beinn Eighe include the common darter, black darter and the much rarer white-faced darter. Comparatively small, darters make easy subjects for photography, as they tend to bask on light objects such as gravel paths and picnic benches, often returning to a favourite perch. Common darters present in this part of Scotland are a darker melanic variant once described as the ‘Highland darter’, and was until recently considered a separate species. These occur on lower ground along the western Highlands from Kintyre to the Hebrides. 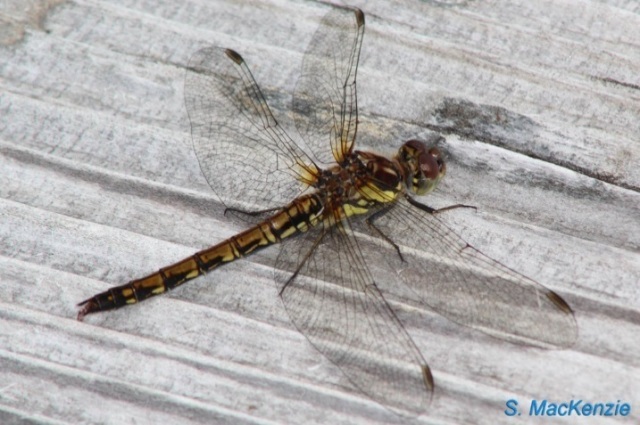 A common darter – The dark melanic variant peculiar to the west Highlands was until recently considered a separate species. © Stuart MacKenzie

The white-faced darter is an attractive dragonfly that favours deep, sphagnum rich woodland bogs. Though scarce, Scotland is the main centre of distribution in the British Isles for this species due to its specific habitat requirement. Seen from May to July at the reserve, both sexes have a white ‘face’ or frons, though males are mainly black with red markings, while females are mainly black with yellow markings.

Skimmers are small to medium-sized dragonflies, named for their tendency to fly low over water. Seen at the reserve from June to September, keeled skimmers are slim with a pronounced dorsal keel-shape to the abdomen. Often seen resting among low heather, male keeled-skimmers are light blue in colour, while the females have a pale-yellow abdomen with a medial black line.

Northern emeralds are a priority species found only in north-west Scotland on mainland Britain, as well as a tiny population in south-west Ireland. With a preference for shallow, acidic, sphagnum bogs scattered among ancient pine and birch woodlands, these beautiful dragonflies can appear quite mesmerising, shimmering in the sunlight with iridescent green and gold metallic hues. Tending to fly only on the warmest summer days, they can be hard to spot, hunting their prey high amid the treetops.

Much smaller than their larger cousins, and weaker flyers, are the damselflies. Often seen flitting above water bodies, as size comparisons go they are typically about the length of a matchstick, whereas a dragonfly may be about the length of your finger. Aside from size, the most obvious way to tell them apart is while they are at rest. A dragonfly always keeps its wings at right angles to its body, whereas a damselfly folds its wings close to its body. Another difference is the eyes. A dragonfly’s eyes will touch with no discernible space, whereas a damselfly’s eyes are located on either side of the head with a distinct area between. Of the damselfly species recorded at Beinn Eighe NNR, most common is the large red damselfly, while the common blue damselfly, blue-tailed damselfly, and emerald damselfly are less common but also present. 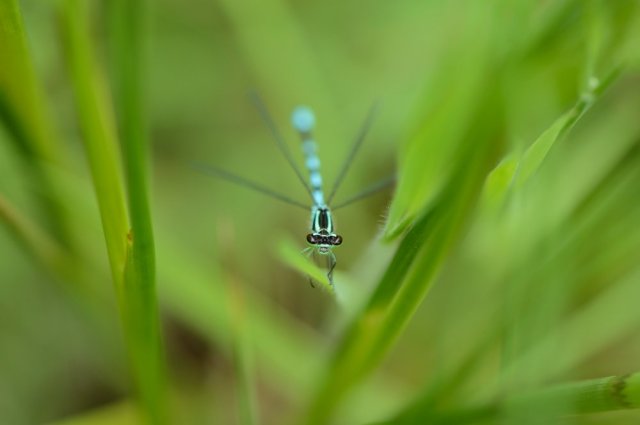 Although the range of suitable habitat at Beinn Eighe NNR currently provides a wonderful haven for dragonflies, there is a significant threat posed in the future from the potential effects of climate change. The bog pools in which dragonflies lay their eggs are at risk of drying out as our summers get warmer. While this will undoubtedly impact upon many species, of particular concern is the azure hawker, as its decline is already being observed in southern parts of its range.

At Beinn Eighe NNR we are already doing what we can to benefit the dragonfly population with sensitive management of their habitats. There are however things we can all do as individuals to benefit dragonflies. One positive step we can take is creating small ponds in our gardens, with gradually sloping sides to vary the depth of shallow water. These ponds should be sheltered but open to warm sunlight from the south, with its northern bank planted with reeds to provide plentiful places for larva to emerge. Even if you don’t have a garden, you can still help by submitting records of any dragonflies or damselflies that you see using the dragonfly app that’s available on the British Dragonfly Society website. Submitting this data helps to show species distribution across the U.K., and helps to determine the success of conservation strategies.

We were very pleased at Beinn Eighe NNR to have recently staged events held by the British Dragonfly Society as part of National Dragonfly Week 2017, which ran from the 15th – 23rd of July. This gave members of the public, as well as reserve staff and volunteers, the opportunity to learn more about dragonflies and how to identify each species. During one of the events we were lucky enough to witness the magical sight of a hawker dragonfly emerging from larva to adult.

With more dragonfly events planned at Beinn Eighe NNR next summer, we hope to encourage even more people to discover these beautiful and enchanting insects. By increasing awareness of the threats posed toward dragonflies and the habitats in which they live, then the better chance we have of can safeguarding their future, so that we can enjoy them for many generations to come.

If you would like to visit Beinn Eighe NNR have a look at the Scotland’s NNR website for more information.