Enabling new ways to value and safeguard nature at the coast

An exciting new project was launched on Friday by Environment Secretary Rosanna Cunningham, in which SNH has a leading role. Dynamic Coast is the first survey of its kind to track the changes to Scotland’s long and varied mobile coastline since the 1890s. It is set to revolutionise our understanding and approach to nature conservation along our coast.

This CREW-funded Scottish Government project was managed by SNH together with a research team from the University of Glasgow. One million data points were used to analyse over 2000 maps to create DynamicCoast.com, a website with 20 reports and a series of online maps. The project supports the public sector, but is also free to view by the public and businesses.

We’ve compared historic maps dating from the 1890s and 1970s against modern mapping, including updates with the latest surveys, to understand coastal changes to a level never achieved before.

The results show that the Scottish shoreline is 21,300 km long, but almost  20% is soft or erodible (3,800km), the equivalent of six times the distance from John O’Groats to the Mull of Kintyre. Of this soft coast, 77% has remained stable and 11% has grown seawards – or accreted, since the 1970s. However, some 12% has eroded landward, the equivalent distance of Edinburgh to John O’Groats.

Storm waves affecting Golspie (Highland) in 2012. Shorefront was flooded with rubble and debris washed onto A9 trunk road. (© Anon) 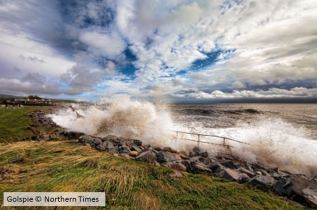 If we compare changes since the 1970s against the historical baseline since the 1890s, a dramatic picture emerges. The extent of erosion has increased by 39% and accretion has fallen by 22%. Rates of erosion and accretion have also doubled, with the average national erosion rate now at 1.0m per year.  If we project the recent increase in erosion into the future, we can see how economic and natural assets, currently protected by the beaches and dunes of the soft coast, may be at risk.

Some of the changes are spectacular and longstanding. The shingle bars at Culbin are growing at 20m a year and have been for millennia. The changes at St Andrews are also remarkable: the dunes have grown so much that almost a whole golf course has been built in land that was sea in 1890. But the positive story at St. Andrews has a catch – erosion now affects areas that have enjoyed growth in the past. Elsewhere, this is matched by rapid losses occurring along many of our large beach and sand dune systems (Montrose, Morrich More, Barry Links, Tentsmuir and in the Western Isles). 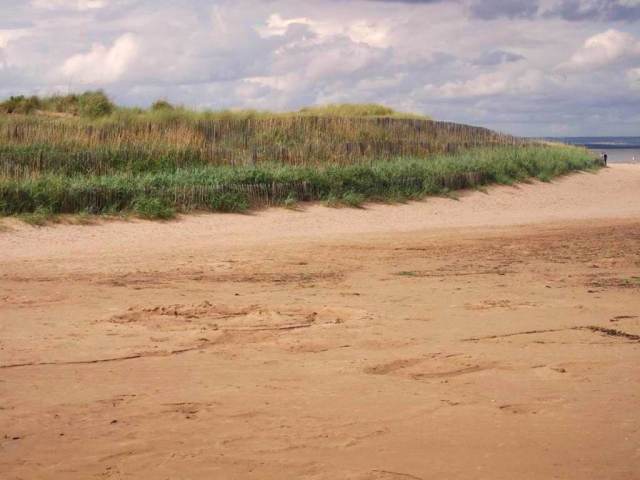 Scotland’s northern, western and southern shores are generally more enclosed, with hard geology protecting and moderating the changes on adjacent soft coasts. However, the relatively open east coast of Scotland has seen dramatic increases in erosion. Of course, since this is our busier, more developed and more populated shore, its properties, roads and infrastructure are more exposed to coastal risk.

These changes are consistent with our expectations of climate change. Much of our coast has been experiencing sea level rise for decades: Aberdeen’s tide gauge shows sea level rise for the last 100 years. So, it isn’t surprising that the dynamic parts of the coast are reflecting these processes.

Where there is significant erosion, we have projected the recent rate forward to consider the future implications. While there are undoubted local differences and nuances, the message is surprisingly consistent: based on current erosion rates, all coastal cells have infrastructure that will be affected by erosion in the coming decades. And all asset types are at risk: buildings, road, rail, water supply, septic tanks, harbours, runways, cultural and natural heritage sites. Of course, projections can’t account for any future coastal defences (which have yet to be planned, funded or built), nor do they include any climate change-related factors such as unknown accelerations due to sea level rise. But we already see enough evidence to suggest that any calculation of our vulnerable assets at risk is likely to underestimate the extent, numbers and costs. 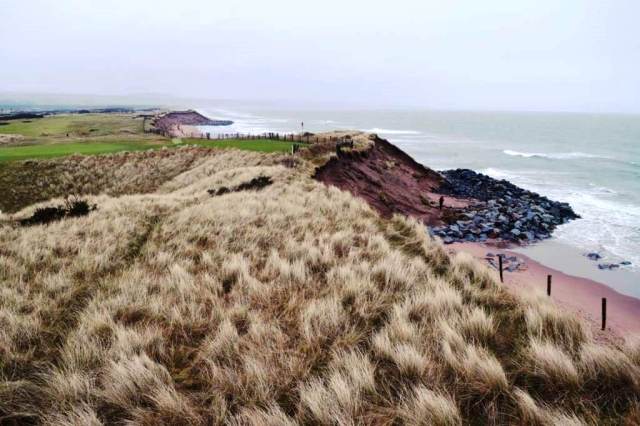 Montrose dunes have eroded since 1890s and erosion is now at 2m per year, threatening one of the oldest golf courses in the country. (©J.Hansom 2016)

The results beg questions about our perception of past and expected coastal erosion. Future projections put a mirror up to our past changes. Many of our habitats and species have lived with slow change for decades or hundreds of years, but the pace of change is now quickening. Darwin’s maxim is a salutary caution: ‘it is not the strongest that will survive, but those most able to cope with change’. Can we cope with the challenge society now faces at the coast? Certainly, perceptions need to change about the way we use the coast and we need to plan for a future that embraces adaptation as a key strategy. DynamicCoast.com allows us access to the reality of present coastal change and to change our perception of the future.

The need for adaptation is clear within the data and partnerships, but also when we consider the global picture. Countless communities around the world are facing up to the effects of rising sea levels, increased flooding and erosion. We should start to adapt where we can and start to appraise the future costs of protection where we can’t. But, in the process, let’s use the dynamism and resilience of our present natural coastal defences; they offer more value than we give them credit for.