Teams of volunteers led by Buglife and supported by SNH have recently rediscovered two species of pot beetles that have not been seen in Scotland for many years. Athayde Tonhasca introduces these lovely beetles with peculiar habits. 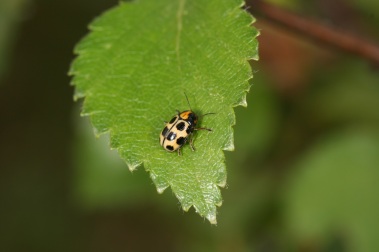 The species that made the news are the six-spotted (Cryptocephalus sexpunctatus) and the ten-spotted (C. decemmaculatus) pot beetles (the less rare two-spotted pot beetle, C. bipunctatus, was also found). These species belong to a large family of leaf beetles (Chrysomelidae), with over 1500 species worldwide, of which 250 are present in Britain. Chrysomelids are usually oval or slightly elongated, brightly-coloured or metallic and have thread-like antennae.

Adult pot beetles feed on leaves and petals, usually from related species of plants, and their larvae eat mainly dried and decaying leaves in the leaf litter. Some species, like the ten-spotted pot beetle, are quite rare and believed to be threatened, mostly because of the reduction of their scrub habitats.

Many species of animals gather materials and put them together to construct homes or shelters that become familiar features of the landscape such as beaver dams, bird nests, bee hives and spider webs. Pot beetles however make use of a cheap, abundant but rather peculiar building material: their own poo. 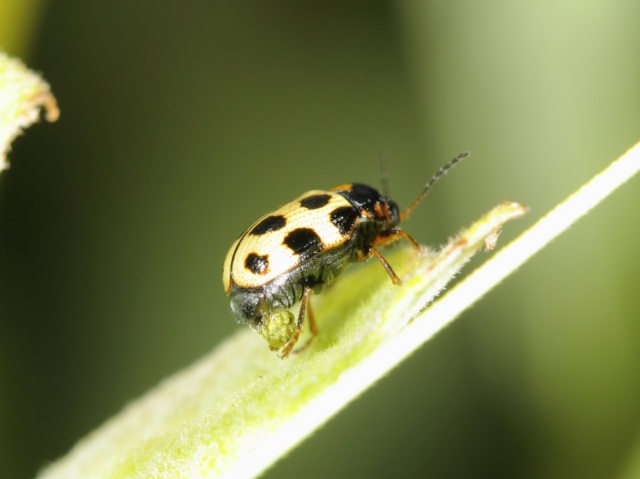 Pot beetles and other species from the same family are known as the case-bearing leaf beetles (camptosomata is the technical term). Instead of simply laying eggs, a female pot beetle rotates each egg with her rear legs, wrapping it with a hardened case made of her own frass (the word entomologists use to describe insect droppings) mixed with body fluids. These beetles even have special body structures known as rectal apparatus to carry out the task of case-building.

The egg, enveloped in a flask-like structure or ‘pot’, is dropped to the ground. When the larva hatches, it stays inside its case, with only the legs and head projecting from an opening at the base as it moves around to feed. So you can say that pot beetles have movable homes, just as hermit crabs have theirs. As the larva grows, it expands the case by applying its own frass to the structure. It may take three years for a larva to complete its development.

Frass may seem an odd and unappealing choice for protecting one’s offspring, but it does have many advantages: it is lightweight and obviously readily available; because of its colour and appearance, it blends into the landscape and camouflages very well. Additionally, most animals generally avoid faeces because they may be sources of diseases. Some researchers believe that case-manufacture could have originated as protection against predators, particularly ants. This has not been proven, but experimental evidence has shown that casings do dissuade parasitoids (insects whose larvae live as parasites that eventually kill their hosts) and protect larvae against desiccation.

Fecal matter has desirable physical properties as well. It can be combined with digested and undigested plant tissues to produce composite materials of different strengths and densities that resist breaking under tension and compression – just like reinforced concrete. Faeces also have thixotropic properties (their viscosity decreases when stress is applied) like mud, a material widely used by humans and animals. Then it is not surprising that an estimated twenty percent of leaf beetle species cover their eggs or larvae in waste products, and other species (particularly among termites, moths and flies) use frass as a building material.

For more on the biology and ecology of pot beetles, check Ross Piper’s report and Buglife’s information page.