A sensory onslaught in the Shiant Isles

Posted on June 15, 2017 by scottishnaturalheritage 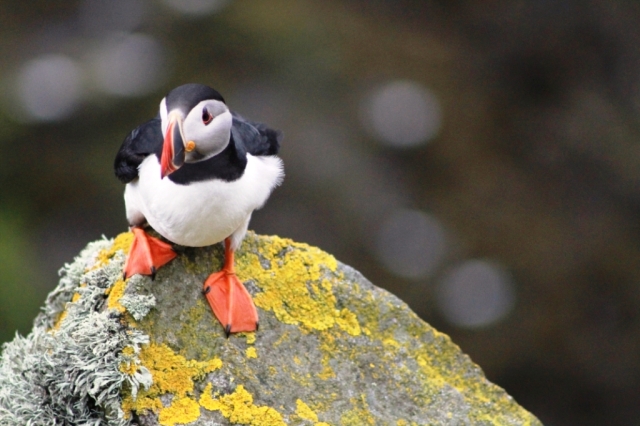 Every so often, when the swell meets the cliff at the required height and direction, a deep rumble resonates from a cave and the rock sends tremors up our feet.

Then we sense the rush of the wind across the surf and its rebound off the rocks, carrying the chatter of guillemots and razorbills groans on the updraft. An immature white-tailed sea-eagle soars with ease across our expansive field of view.

And the unlikely whirr of a puffin careering much too close to the back of your head catches you unawares, seemingly out of control on its perilous approach to land. At the last moment it tilts its wings and splays ridiculous orange feet for an effective, if ungainly, landing.

This is just the beginning of the sensory onslaught. Spectacular bird numbers, puffins and razorbills especially, reel in the sky, fuss about on the rocks, and rest on the water.  We catch the occasional intense sniff of guano, an inevitable experience in such places, but we are fortunate with the direction of the breeze on this day.

These are the Shiant Isles, a proud cluster of rocks in the Minch between northern Skye and Lewis.

We have spent a lot of time in and around seabird colonies, but the Shiants presented us with a different experience. The lie of the land puts you in places that make you feel like you are at the heart of the action. Here you are on a level and birds are often too close for a telephoto lens.

The seabirds may be the main attraction, but these islands have a subtler side as well, providing some calming respite from the cacophony of the colonies. Heath-spotted orchids are abundant on Garbh Eilean, fluttering in the breeze among the distinctive twitter of skylarks.

On Eilean an Taighe, where the intensity of sheep grazing has been vastly reduced, large swathes of willow are recovering well, patches of silverweed glisten and king cups, yellow flag iris and celandines enjoy the damp areas of ground.

The make-up of our group also added fresh perspectives. We are two ecologists from SNH, on holiday with three artists (Liz Myhill, Kittie Jones and Emily Ingrey-Counter) and a photographer (Gregor Menzies). Watching professional artworks come together in the field is fascinating. 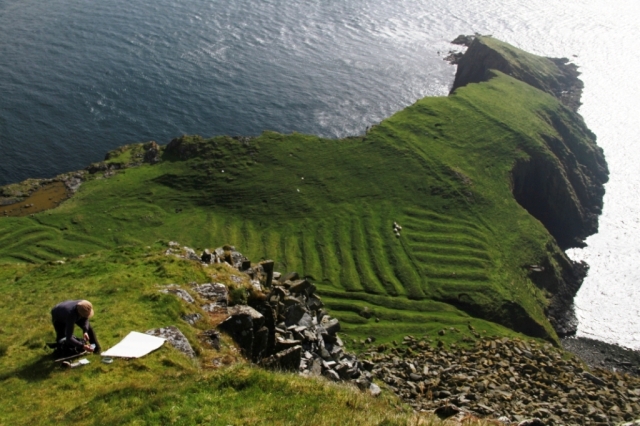 Having these islands to ourselves for five days is also special. Well, almost to ourselves… some kayakers stopped to camp on our first night there, and RSPB Scotland currently has staff there.

We listened with interest to their accounts of life and work on an otherwise uninhabited island. They have been working hard, in partnership with ourselves at SNH and the Nicolson family, to eradicate black rats (Rattus rattus)  from the island under the Shiant Isles Seabird Recovery Project.

They are now monitoring for signs of rats and seabird recovery and are quietly hopeful that they have been successful. And we are glad not to have experienced the infestations accounted by others before us.

For the wonder of this wildlife spectacle let’s hope for that success and continued responsible stewardship of this special place.

All pictures and video by Chris Leakey except where stated otherwise.