Images of bright orange, dead flame shells strewn across the seabed in Loch Carron received widespread social and mainstream media coverage recently. Recreational divers had reported that the flame shell bed – a rare and ecologically important habitat – had been damaged by a scallop dredger. 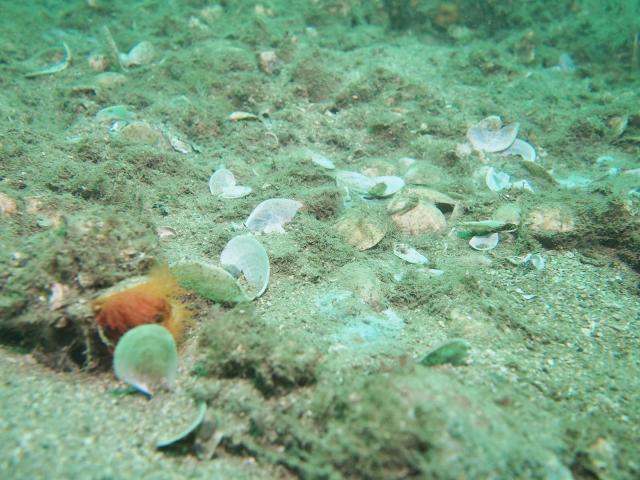 SNH’s dive team was quickly asked to head out to Loch Carron, to team-up with Marine Scotland Science (MSS) colleagues, investigate the flame shell bed and report back to Ministers.

Flame shells are beautiful, four centimetre long bivalve molluscs with vivid red and orange tentacles. They spend most of their lives completely hidden on the seabed inside nests built from shells, stones and other materials around them.

A healthy flame shell on the surface of the bed, taken on a previous survey

Hundreds of these nests – occasionally, many thousands – can combine to form a dense bed, raising and stabilising the sea floor and making it more attractive for lots of other creatures. Flame shell beds are known to support juvenile shellfish, including scallops, and commercially important fish species. In one study, in Loch Fyne, six nest complexes supported 265 species of invertebrates.

Flame shell beds used to be more widespread but they are extremely sensitive to physical disturbance, such as dredging and they are now rare in the UK. The species is mainly found on the west coast and the densest beds are in Scottish waters, where it is a Priority Marine Feature.

Our team met up with surveyors from Marine Scotland Science to carry out a joint survey of the flame shell beds in the area and to confirm the extent of any damage. MSS studied the bed using an underwater camera which relayed high resolution video footage to their Research Vessel, Alba na Mara. This enabled them to carry out surveys to work out how big the bed is. A small number of ‘grab samples’ were remotely collected to validate this footage and enable the team to analyse the composition of the seabed.

The SNH team carried out 16 dives over two days and confirmed that the damage on the seabed was consistent with scallop dredging.

Most of the damaged animals seen by the recreational divers had already been eaten or had decayed. In photos taken by our divers you can see patches of grey mould around the clumps of bright white, empty shells that are evidence of this. Distinct tracks and broken urchins are also visible on the seabed.

Additionally, the divers investigated the wider distribution and condition of flame shells and other Priority Marine Features in the area. And to complement the work being carried out by our MSS colleagues from their boat, our team collected 22 brief video samples from the SNH Rigid Inflatable Boat (RIB), by dropping a camera attached to an ‘umbilical’ overboard.

An SNH diver filming on the flame shell bed

Intact flame shell habitat was found around the margins of the damaged areas and at other sites surveyed away from the mapped bed, so there is some hope that the habitat will eventually recover, but this is likely to take many years.

The samples and images from the survey are currently being analysed in finer detail, to provide a clearer picture of the extent of the flame shell bed. We will publish the findings later in the year but in the meantime our field report provides an initial analysis of the survey results and you can view that here.

All photos and video (C) SNH.