Like them or loathe them, seagulls are a key part of our nature in Scotland. Many have made their home in our towns and cities and as opportunistic scavengers they can eke out a living thanks (largely) to us.

But, I’m not writing about these town gulls, nope, this is all about the wild, free-flying, free-living gulls battling for survival on the Island of Canna. If you don’t know where it is, Canna is one of the Small Isles, just south of Skye and just west of Rum.

For the last 48 years, seabirds have been studied on this island. This makes it one of the longest running seabird studies in Europe and I’ve been part of the small team of dedicated volunteers who annually look at the changing fortunes of Canna’s seabirds. Over the years, we’ve counted the numbers of gulls nesting and when we started to look at the results we noticed a very steep decline. From 2001 to 2005 numbers plummeted from around 1,300 birds around 100. So we began to wonder why have they declined. What possible reason could cause such a steep decline?

As a kid I remember helping to count the gulls on Canna and looking at what the chicks were been fed, mostly it was whitefish and other items that had probably been scavenged from fishing boats. So was the answer to the question to do with fishing? We went back through the fish landing records for the nearby port of Mallaig and the results were astonishing … (well to us anyway!). 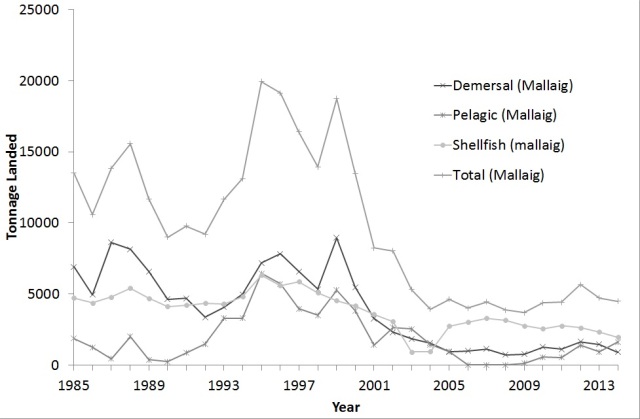 It appears that the changes in gull numbers were closely linked to changes in fish landings. When we looked at information from the 1930s the numbers of gulls nesting on Canna was very similar to the latest numbers. So although we talk about a decline, what we may be seeing on Canna is gull numbers returning to more normal, albeit lower levels. There is still much to learn about seabirds and long-term studies like those on Canna continue to be of immense value in adding to our knowledge.

If you’re interested in reading more about the work the paper is available from Taylor and Francis online.

Simon Foster is our Trends and Indicators Analyst.