Part of the Ythan Estuary has been proposed for designation by Marine Scotland as an official seal haul out site. This designation gives protection to the seals by providing safe areas for them when hauled out on land. So what does this mean for those visiting the Ythan and Forvie National Nature Reserve? Annabel Drysdale, our Reserve Manager at Forvie, explains. 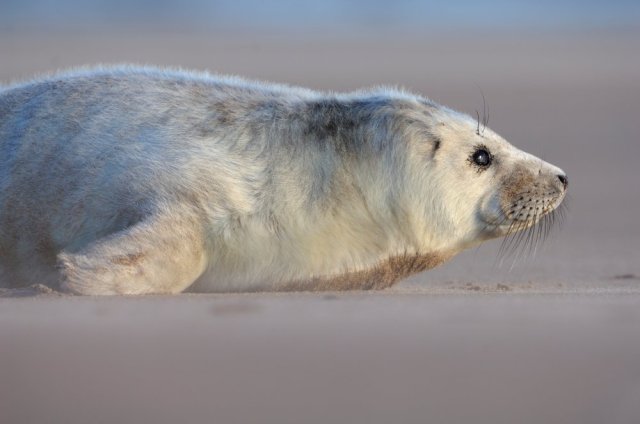 It’s wonderful news that Forvie National Nature Reserve is becoming one of the best mainland sites to view seals in Scotland, with over 1000 large grey seals hauling out at the mouth of the River Ythan at Newburgh in recent years – 26% of Scotland’s east coast population – but we’d ask people to help us protect these wonderful animals. We recommend that people view the seals from the south side of the estuary at Newburgh village. There’s been a big increase in visitor numbers, particularly over the last year, so this extra protection for the seals is welcome and important.

The designation affords protection to haul out sites from “reckless or intentional harassment”, which means repeated and deliberate attempts to remove seals from resting. Walking on a beach and inadvertently disturbing a seal is not an offence.

This winter, up to a dozen pups were born on the beach at Forvie; for the first few weeks of their lives, they are vulnerable to disturbance and abandonment. Grey seal pups are born with white fur and don’t swim until they moult and grow a new coat of grey or brown fur. Grey seal mothers often leave their pups on the beach while they forage for food during this period and can abandon them if they are touched by humans or their dogs before they return. Approaching seals can also be dangerous: grey seals are large and powerful and new mothers can be aggressive and can charge even on the land. Approaching too close can also be stressful to the animals reducing their chances of survival.

Grey seals hauled out on the sand dunes at the Ythan estuary, Sands of Forvie NNR. ©Lorne Gill/SNH

We’re not certain why the grey seal haul out has grown so quickly at Forvie, but the local population should not be considered in isolation, as seals roam for many hundreds of kilometres throughout their lives. The number of grey seal pups counted in the UK has increased since the 1960s, with large numbers being seen at North Sea sites. In the Northern and Western Isles, the number of pups counted has levelled off in the last five years. The number of common, or harbour, seals, continues to decline across eastern Scotland and in Orkney. The results of more than five years of diet studies, in partnership with the universities of St Andrews and Aberdeen, have shown that the seals are not predominantly feeding at the Ythan. The diet of grey seals at Forvie is largely sand eels, cod, whiting, haddock and other North Sea fish species. Seals like to haul out between feeding trips to sea or while they moult their fur, so the golden sands at Forvie make an inviting spot for such a rest.

You can find more information, including guidance on what constitutes an offence here.

Following several incidents at Forvie in recent months, nature reserve staff have introduced information notices and a rope fence to encourage responsible access at the haul out and protect the seals. We’ll continue to manage the site in partnership with the local community, Aberdeenshire Council, Police Scotland, Marine Scotland and our visitors.

Read all about seals in Scotland in our Naturally Scottish booklet.