Posted on December 6, 2016 by NatureScot

As the wildlife at Beinn Eighe NNR busily prepares for winter, it’s a busy time too for our team, as work continues on improving and expanding the native woodlands at the reserve. 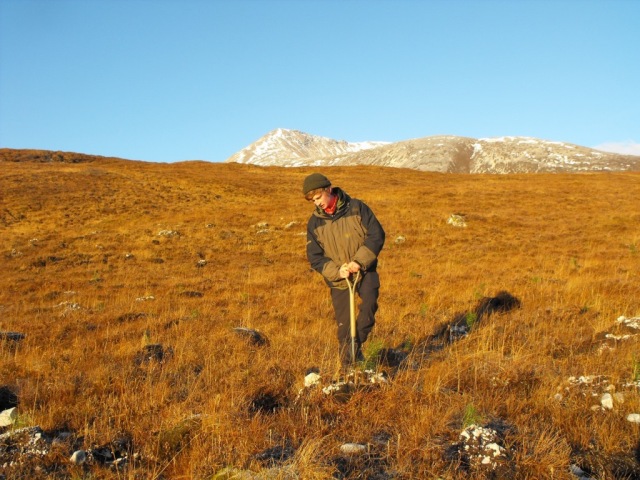 Over the years we have undertaken a number of different strategies at Beinn Eighe in order to achieve the long term goal of expanding the woodlands to reconnect the remnants of ancient Caledonian pine forest. During the 1960s this involved the planting of pine trees in neat rows, in the manner of a commercial plantation, as this method achieved quick results.

The problem with this planting method is that it creates an unnatural woodland, comprising trees of similar age which develop tall, thin trunks, due to the competition for space. As less light is able to penetrate the dense forest canopy, the ground flora in these plantation woodlands tends to be dominated by just one or two plant species that are able to cope with the reduced sunlight.

Over the last month our team has been carrying out woodland restructuring to help create more natural conditions within the plantation woodlands. This involves felling certain trees by winch rather than by chainsaw, simulating being blown down naturally by the wind. This not only helps to break up the regimented appearance of the woodland, but also allows for a greater diversity of plant species, as more light is able to reach the forest floor. Other techniques include topping, where only the top part of the tree is removed, leaving its trunk as standing deadwood.

Woodland restructuring may appear destructive at first, but it is important to bear in mind that healthy woodland should contain a certain ratio of both standing and fallen deadwood, as this provides habitat for a range of species, from plants and fungi to hibernating insects and bats. While natural woodland regeneration is encouraged as much as possible, tree-planting is still carried out at the reserve and around its neighbouring woodlands to help kick-start this process. Nowadays however, when planting trees, a method of random spacing is favoured over that of neat rows, as this simulates a more natural woodland.

Volunteers carry out work at the tree nursery.

At Beinn Eighe we are fortunate to have our own tree nursery, where seeds that have been collected from the reserve’s woodlands are germinated and grown until they are of a suitable size for planting. The Scots pine native to Beinn Eighe differ genetically from the Scots pine that grow elsewhere in Scotland, which could mean they have developed greater resilience to the wetter conditions of the Atlantic coastline. It is therefore important that any trees we plant at Beinn Eighe NNR come only from seeds that have been gathered from the woodlands here at the reserve.

We have just planted around 10,000 trees at Beinn Eighe, comprising Scots pine and native broadleaf species such as birch, aspen, holly and oak. These planted trees will help to reconnect Beinn Eighe’s fragmented ancient woodlands with the other woodland habitats just outside the reserve. Moreover the planted trees will act as a seed source allowing the woodland to expand naturally, one day forming a far greater forest expanse which will ultimately benefit the reserve’s wildlife and ecosystems.

There are no quick results when it comes to creating forests, and it will be many years before the trees we plant today become fully mature. For now we are simply planting the seeds of Beinn Eighe’s future pine forest, and only time will determine its outcome.

Stuart MacKenzie is our SRUC Placement at Beinn Eighe NNR.