Extremely rare and delicate reefs formed by large numbers of colourful ‘organ-pipe’ worms have been discovered in a Lochaber sea loch by citizen scientist divers from Seasearch. 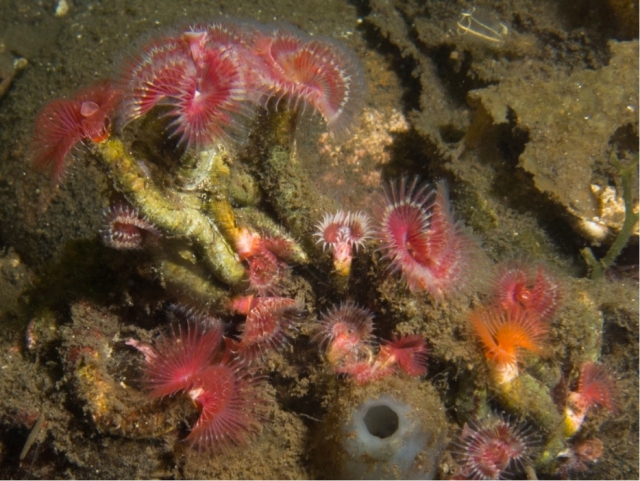 A small aggregation of serpulid worms.

For several weeks our marine team have been unusually excited; itching to peel on their neoprene suits and plunge into the crystal clear but cold waters of Loch Ailort, to investigate reported sightings of serpulid reefs. So on a recent scheduled survey to monitor the Sound of Arisaig Special Area of Conservation, wild seahorses couldn’t have got in the way of an impromptu dive to follow up on this exciting find.

The organ-pipe worm Serpula vermicularis is a beautiful marine tubeworm with a showy crown of feathery tentacles, bright red, pink and orange, contrasting with its hard white tubes. Individual organ-pipe worms have an almost worldwide distribution, except for polar seas; but in just a few special places, hundreds of them grow together forming bush like structures or ‘reefs’.

Each reef starts with a newly-settled worm building its tube on a stone or shell on the muddy seabed. More worms settle on the rock and on existing worm tubes, their open ends growing upwards and outwards. When the worms are out of their tubes the reefs look like lavish bouquets of flowers. At the slightest movement nearby though, or even a light shining, the worms retract and close their tube entrance with a conical plug.

Serpulid reefs have only been reported at a handful of locations in the world, making it one of the rarest marine habitats we have in Scotland. Outside of our waters only two loughs on the west coast of Ireland contain a restricted area of small reefs, and they have been reported from a coastal lagoon in Italy.

The reefs are very fragile and extremely vulnerable to human disturbance, such as from fishing gear, anchors and mooring chains and even divers’ fins. But they are also vulnerable to natural disturbance. There were previously reefs in Loch Sween, but these died out in the 1990s for reasons that are still not understood, and now only the dead worm tubes remain. More recently two other known locations in Scotland have also seen declines, including the best developed and largest area of serpulid reefs known in the world, in Loch Creran.

When our divers finally made it into the crisp, clean waters of Loch Ailort they found a beautiful underwater landscape dominated by a forest of parchment worm tubes covered in sealoch anemones. And looking more closely they sure enough found the small serpulid reefs nestled between boulders. The reefs are a boon for local biodiversity, increasing the complexity of the seabed and creating new opportunities for other plants and animals to hide, attach shelter, hunt and scavenge.

Scotland’s seas are unique and full of surprises. This incredibly rare find highlights the important contribution citizen scientist divers make to marine nature conservation. If you feel inspired, you could get trained up as a Seasearcher and join us on our exploration of Scotland’s seas! Visit their website to find out more.