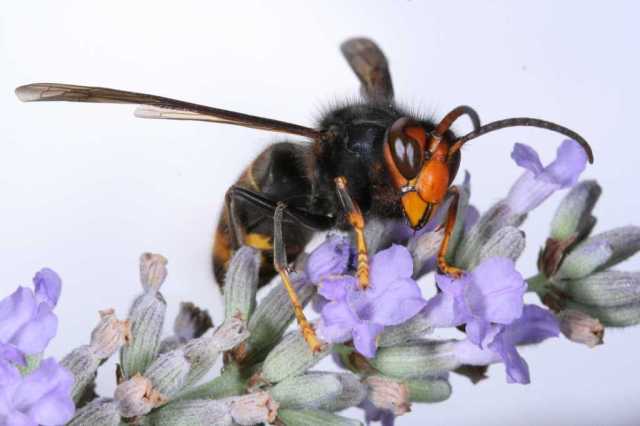 The Asian hornet (Vespa velutina) has been sighted in Gloucestershire, possibly making its way into the UK from France. This is not good news because Asian hornets are aggressive predators, feeding on honey bees and other insects – although we don’t know yet the extent of damage they cause. This wasp was accidentally introduced to France in 2004, where it spread rapidly. If the Asian hornet becomes established in England, it may eventually reach Scotland. Therefore it is important to be able to identify this invasive species and report possible sightings. The Asian hornet is likely to be near beehives, so beekeepers in particular should be on the alert.

The Asian hornet can be easily mistaken for our native species, even though it is smaller. One of the key features for identification is the abdomen; it is entirely dark except for the fourth segment, which is yellow. Native hornets have a yellow abdomen with black patches or stripes. The GB Non-native Species Secretariat (NNSS) has produced an ID sheet and alert poster that are very useful for identification.

Suspected sightings can be reported to alertnonnative@ceh.ac.uk or through an online form.