Posted on August 25, 2016 by jimjeffreysnhgovuk

Ewen Cameron has spent four decades working with Scottish Natural Heritage and its forerunners. He retires in September and we asked him to reflect on his 40 years in the environment business.

This September 2016 marks 40 years since I started work with the Nature Conservancy Council (NCC) – one of SNH’s predecessors – and inevitably it awoke a reflective spell. Brought up on a family farm north of Inverness, I am old enough to remember the last days of working horses. I even had a ration book for sugar – which probably explains a lot to people who know me! Farming never really appealed but I was lucky enough to have a wee brother who loved it. Many things I disliked about farming don’t happen anymore though – like hoeing turnips or digging a hole with a spade to bury a dead sheep. Take my word for it; that’s a lot of spadework!

I didn’t like being cold, wet and dirty either, so when I got the chance of a six-month contract working for NCC in their new Inverness office in 1976, I jumped at the chance.  Late that year, I was sent to Inverpolly National Nature Reserve (NNR) to collect some native tree seed.

There was a bit of cold, wet and dirty involved, but now I was being paid, which made it much more tolerable, and for the first time I met – Nature Reserve Wardens!   An exotic breed of outdoor men (and they were always men in those days), usually bearded, who worked with Nature. I was hooked.   The wardens at Inverpolly then were Bill Henderson and Davie Duncan and I learned a great deal from them those two days – enough to fill a whole book.

A couple of weeks after my first contract finished, I got a call from NCC asking if I would be interested in a contract as summer warden on Beinn Eighe NNR – would I ever! After a few months there, I was asked if I would like a longer term contract managing the soon to be declared NNR in Glen Strathfarrar. My ‘own’ nature reserve – what more could I possibly want?

Newly married, my wife Susan and I now rented a furnished three-bedroom house for £20 per week, but my take home pay was only £29.70! I never did manage to grow a beard.

The wildlife records for Glen Strathfarrar were a bit patchy and I set to compiling records of birds, butterflies, moths and plants – I was amazed and excited as the lists grew longer and longer. A picture grew of a part of Scotland still incredibly rich in wildlife which I loved sharing with visiting groups.

One of my main tasks was to identify areas that could be fenced off to allow woodland regeneration, which meant I came into close and regular contact with two local keepers: Donnie Fraser and Henry Bain. Once again, I was lucky to learn a lot from two patient and observant men. I have no doubt my leg was pulled from time to time without my even knowing it – but these were very happy and productive years.   Decades on, it is gratifying to see some areas of woodland that in the early 80s were just scatters of a few ageing trees. The nature reserves at Ben Wyvis and Nigg & Udale Bays were added to my ‘portfolio’ as was Rhum (as it was still spelled) after a short stint, and various delightful tasks like ferrying the newly arrived Norwegian sea eagle chicks from RAF Kinloss to Mallaig. All that would fill another book. 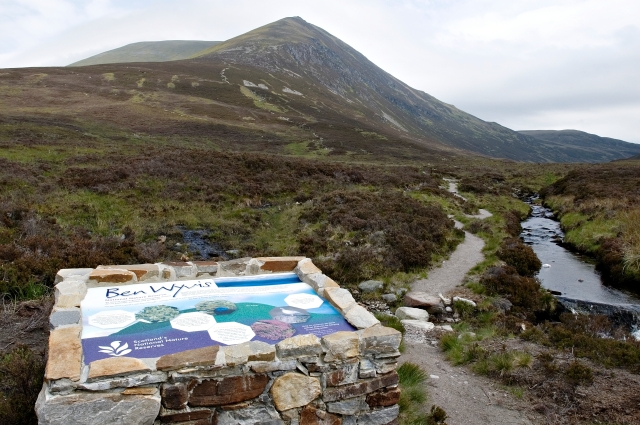 The mid-80s saw turmoil as, with our young daughters Ailidh and Kirsty and a slightly mad cross-bred terrier called Jaina, we moved to Aberdeenshire where the nature reserve in Glen Tanar became my main responsibility. But it was my secondary responsibility at St Cyrus that introduced me to another wildlife hotspot.

It was only after my dad’s death in 1985 that I discovered he had been a reluctant farmer himself with no brothers to take on the family business; he had once won a school prize for his wildflower collection. I well remember him getting on and off the tractor to move oystercatcher or lapwing eggs. I don’t remember ever being taught all these things – I guess that, like the best education, it just seeped in rather than being forced in.

As the 80s progressed to the 90s, SNH came into being and I spent more time at my desk and eventually in front of a computer. I relished the fact that SNH had a bigger budget and was able to help get more done. When I came to manage the grants budget in NE Scotland, it was great to be able to fund small groups and initiatives that were busy doing We helped fund major footpath projects, organisations that used the outdoors in their therapeutic work with special needs groups, countryside ranger employers, school grounds projects and various wildlife charities which were managing their own nature reserves. The pleasure then was seeing lots of others empowered to do the things that they wanted to get done.

Two projects from that time which remain close to my heart are the NE Biodiversity Partnership and the North East Scotland Biological Records Centre. Both organisations help and encourage people not to wait for ‘them’ to do something but make a difference themselves. Whether it’s in the garden, on the farm, or in the school grounds, we can all make a difference for wildlife.

Wildlife recording and managing areas for wildlife is valuable for all sorts of things; it is open to absolutely everyone and I will certainly be doing more of that once I retire. And remember, despite all the pricey machinery farmers have nowadays and all our clever technology, it’s still wee beasties and creepy crawlies that pollinate food crops and keep the soil fertil, while and the more natural areas help us lead healthy lives.

While tidying out my desk for the last time, I found an old lamp, which I rubbed and lo and behold a genie appeared offering three wishes.

Wish 1 –People stopped squabbling about who the real custodians of the countryside are. We have all contributed to environmental decline during my lifetime and we are all responsible for helping to put things right.

Wish 2 –People stopped trying to blame environmental declines on single causes – our environment is complex. Pine martens aren’t responsible for the decline of red squirrels. While some slugs will eat your plants, other slugs will eat the plant-eating slugs. I only net some of the soft fruit in my garden – I’m happy for the birds to have some too because they are also important predators that help “keep the balance.”

Wish 3 –Everyone in Scotland submitted wildlife records to their local records centre. People often assume we know everything there is to know about wildlife – where it is, how common it is, etc. But nothing could be further from the truth. And with climate and other changes, numbers and locations are always changing. All sorts of people use these records for planning, developing, providing new services and infrastructure, land use and more.   Wildlife recording is both useful and fun.

Farewell Ewen from all your colleagues at Scottish Natural Heritage, it’s been a pleasure working with you.