We thought we’d try out a different approach to our blog posts.  Rather than a blog dropping into your inbox three times a week, you’ll receive one notification but with two or three stories to enjoy. We’d love to hear what you think – do you like the all-in-one approach or did you prefer to have the separate blogs arriving on different days?

Please contact us to let us know by emailing editor@snh.gov.uk. We look forward to your feedback.

Out of Doors at Taynish

Taynish National Nature Reserve recently had a visit by Mark Stephen from BBC Radio Scotland’s Out of Doors who came to see how we are tackling bracken bashing on this very special reserve.

For the last few years we have been trying to reduce the bracken growth on the reserve by various methods including by hand and using a horse-drawn roller. As we made our way along the main reserve track and headed up the Barr Mor, we were met by Gordon Campbell the reserve manager and a group from Cambridge Conservation Volunteers who were tackling the bracken using scythes.

Mark Stephen has a go at cutting bracken.

Gordon and Mark swapped roles for a few minutes to allow Mark to try his hand at cutting the bracken. Gordon explained that although bracken is a native plant, it is quite invasive and can dominate to the detriment of other plants. By reducing the bracken cover other native plants, like thistle, blaeberry, foxglove and oak seedlings, can thrive which in turn will encourage insects and mammals and allow previously bracken-blanketed stretches of land to flourish.

In areas inaccessible by mechanical means, Angus Bevan and Jacob the horse were bashing the bracken using a horse drawn roller which is designed to bruise the bracken stems as they pass over the vegetation. This is proving to be a very effective method of keeping the bracken down without the use of chemicals or motor-driven machinery. Angus also has a new apprentice to the team, Columbine, who follows Angus and Jacob round the route learning her trade from the older horse. 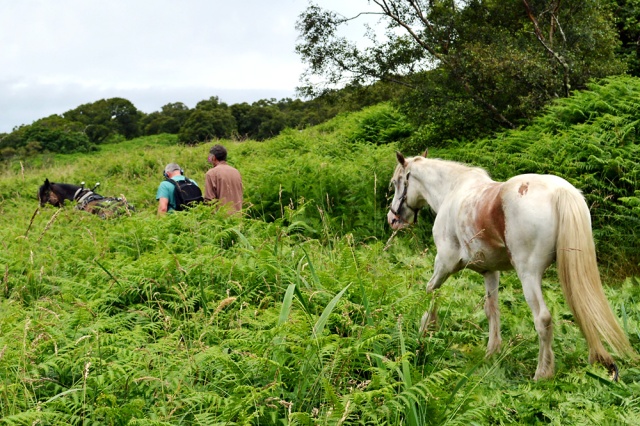 You can hear Mark’s recording of this visit to Taynish on Radio Scotland’s Out of Doors on the BBC iPlayer here.
Then on Saturday 30 July Out of Doors returns to Taynish to look at the Art Trail.

Why not make your own ‘out of doors’ visit to Taynish and you too can see just how special it is?  Find out how to get there and what there is to see on the NNR website.

Stretching from the Firth of Forth in the south of the region, to the Firth of Tay in the north, the Fife Coastal Path is one of Scotland’s Great Trails whose fully way-marked route offers an unrivalled walking experience along Fife’s Fringe of Gold. 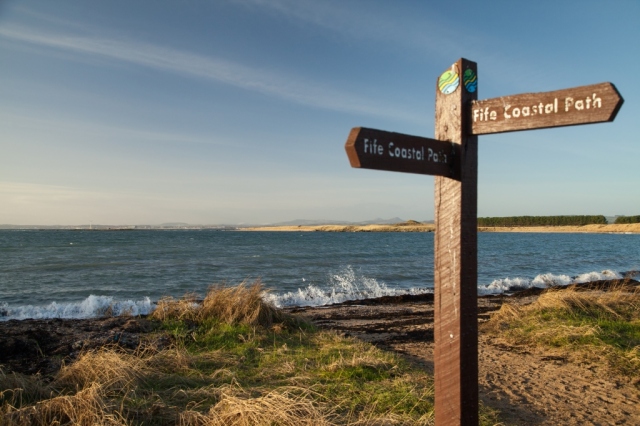 The coastal path at Earlsferry. ©Fife Coast and Countryside Trust

There is so much to explore on the 117 mile route: rugged cliffs, award-winning beaches, internationally important estuaries and wildlife reserves as well as places of historical and industrial interest, making walking the Fife Coastal Path a real ‘Scotland in miniature’ experience.

Lava flows are a feature of the Fife coast, a reminder of an eruption of the Binn volcano over 300 million years ago. The underlying limestone strata contain marine fossils from a time when Scotland had a tropical climate. The Starley Burn Waterfall, near Aberdour displays fascinating patterns and colours in the rock due to the lime rich waters. (Look at the short video clip here.)

From Kirkcaldy the path passes the 16th-century Seafield Tower and the nearby rocks are a haven for birdlife and basking seals. Following the esplanade and winding steeply to Pathhead Sands, a location which features in several of John Buchan’s novels, and onto Ravenscraig Castle, walkers will be treated to a spectacular view from Sailor’s Walk, taking in the historic Royal Burgh of Dysart. The 13th century St Serf’s Tower and the restored Pan Ha’ red tiled cottages looking out over the Forth dominate the shore.

The beaches from Burntisland to the East Neuk include Ruby Bay, named for garnet gemstones once found there. This is a great rock pool location and with a bit of careful investigation you could turn up periwinkles, whelks, and sea anemones, as well as shore or hermit crabs.  On the shoreline you can spot wading birds such as redshank and curlew feeding.

From Elie the route is full of geological and historical interest, including Elie Lighthouse and Lady Tower built for Lady Janet Anstruther as a summer house in the 1760’s, and the ruins of Ardross and Newark Castles.

Further around the coast the restored St Monans Windmill sits close to the shore, once used to pump seawater into the adjacent salt pans. The limestone beds here are rich in fossils. The next village of Pittenweem is Fife’s only remaining working fishing harbour, a memory of a once thriving and vital industry.

The rocky shore past Billow Ness leads into Anstruther where there are daily boat trips during the summer months to the Isle of May National Nature Reserve.

Geological features litter the Fife Coastal Path such as the many caves, one reputed to have been home to St Fillan, another, the site of the murder of King Constantine. Buddo Rock, an interestingly weathered piece of sandstone, and the Rock and Spindle tidal stack and basalt extrusion are sought out by many enthusiasts.

The Eden Estuary LNR is vast and is used for many different purposes, including recreational activities such as wildfowling, for which a permit is required, walking, bird watching, and horse-riding. Being made up of rich intertidal mud and sand flats, Eden Estuary is home to millions of tiny plants and animals. Due to this wealth of food, the site supports a huge variety and volume of bird life. Notable birds include black-tailed godwit, grey plover, redshank, shelduck and red-breasted merganser. You might also have a chance of spotting interesting mammals including otter and common seal. Dolphins have also been known to venture into the estuary. The on-site visitor centre is a great place to start your exploration of the reserve. 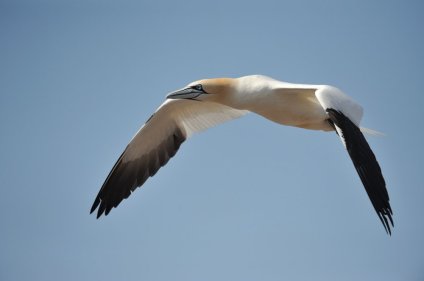 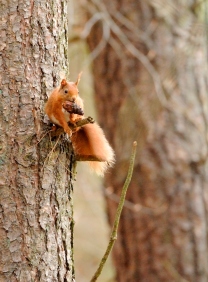 In St Andrews, both East Sands and West Sands are Seaside Award beaches, East Sands is a popular watersports location and a feeding ground for many seabirds as well as a haven for seals and dolphins. West Sands offers almost two miles of sand backed by restored dunes, protecting the coastline from further erosion. The whole area is home to a huge range of wildflife from the hares who live in the grassed areas to the skua, eider, gannet and maybe even sea eagle you might be lucky enough to catch a glimpse of.

Wildlife reserves such as Kilminning near Crail, Dumbarine near Lower Largo and the Tentsmuir National Nature Reserve near St Andrews, offer welcome opportunities for spotting native species along the trail such as the elusive red squirrel and birds like stonechat and turnstone. Off the shore you can see gannets and terns circling on the hunt for food.

Find more detail about the different stages of the route on the Fife Coastal Path website.

There are 26 of Scotland’s Great Trails all over Scotland, discover more of them here . 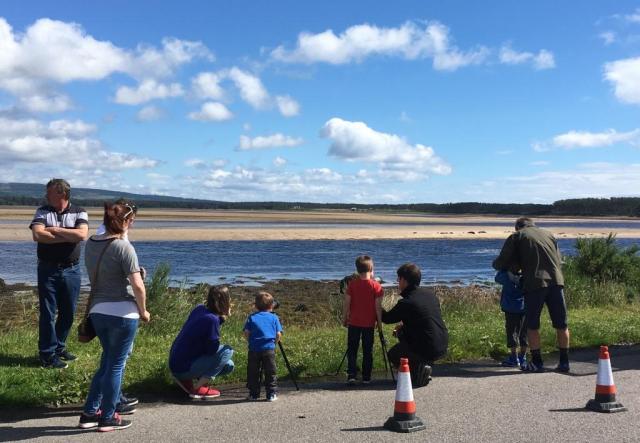 Over 20 visitors of all ages turned out at Loch Fleet’s seal watchpoint earlier in July, to enjoy spectacular coastal views and learn more about harbour seals and their pups.

Loch Fleet’s resident seal population can be seen at this time of year lounging about on the sandbanks on the south side of the tidal basin.  Around 50 pups were born here this year, roughly the same as last year.

You can’t miss the harbour seals out on the sand bank. © Adam Rose

Some of this year’s pups could be seen relaxing in the sun with their mums, and sliding in and out and splashing about in the water.  As the tide came in, visitors witnessed the amusing sight of the seals doing their best ‘banana’ impressions as they tried to curl up and away from the water keeping their heads and tails dry until the very last minute.

A harbour seal at the surface. ©Alex Mustard/2020VISION

A harbour seal pup resting on a sandbank. ©Danny Green/2020VISION

Taking part in the event were staff from Aberdeen University’s Cromarty Lighthouse Field Station.  They were on hand to explain their ongoing research into harbour seals that has been taking place at Loch Fleet for more than 10 years.  During that time, they have developed a photographic library of all the seals and amassed a wealth of information about them.  You can follow Lighthouse Field Station’s research on their blog. http://www.abdn.ac.uk/lighthouse/blog/

Recent research into seals’ movements using GPS tracking has shown that the majority of seals move around within the inner Moray Firth as far as Inverness.  Two of the more adventurous seals travelled as far as the Kyle of Tongue and Orkney before losing their trackers in May 2015.  They were found to have returned to Loch Fleet this year making impressive return journeys of 400kms and 325kms respectively.

At low tide, Loch Fleet NNR’s harbour seals are one of the reserves many visitor highlights.  The seal watchpoint, on the south side of the loch with its purpose-built extended layby and interpretative information, can be enjoyed at any time and affords visitors panoramic views across Loch Fleet’s tidal basin.  It can provide one of the most accessible and effortless views of seals in Sutherland.

But the day wasn’t all about the seals.  Ospreys, another of the wildlife highlights on the reserve, were seen swooping down to catch fish in the channel of the River Fleet and oystercatchers and arctic terns were also seen along the shore line and on the tidal mud flats. 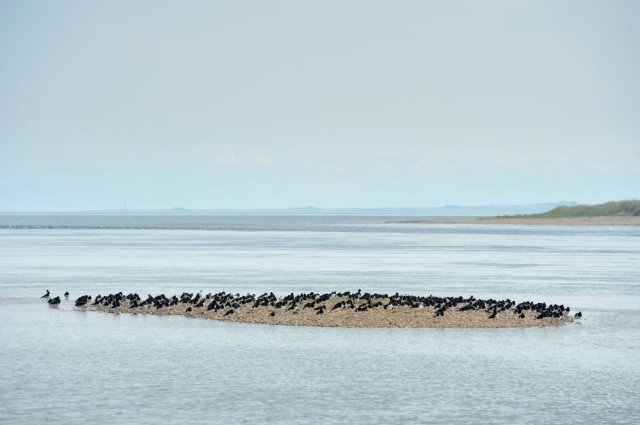 National Nature Reserves can be found across Scotland and really are the jewels in our nature’s crown. They offer visitors a chance to get up close to wildlife and to relax and unwind in some of our finest landscapes. For more information visit the NNR website

So this summer, why not visit the seal watchpoint, take a stroll along the woodland path to the Balblair Bay bird hide or have a picnic on the dunes at Littleferry?  It’s an excellent way to spend a day or two outdoors and you can do all this at Loch Fleet NNR.