The shocking reality of the damage done to our marine wildlife by human rubbish is something we all need to think about.  Zeshan Akhter, SNH’s Biodiversity Strategy Officer, tells us more, and you’ll be surprised. 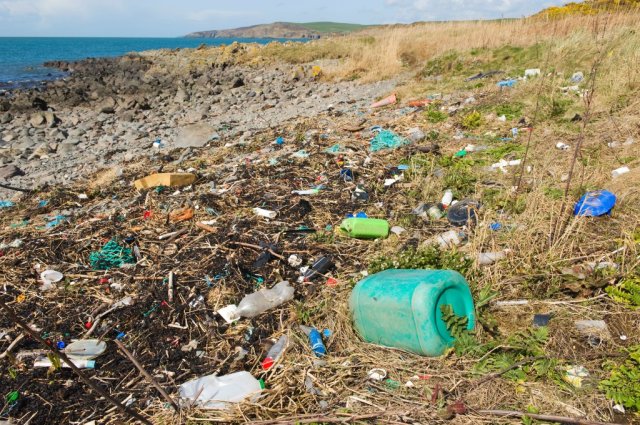 Plastic rubbish washed up on a beach in the Mull of Galloway. ©Lorne Gill/SNH

“Well, you lot have set yourselves up for a depressing evening!”  This was the cheerfully wicked greeting delivered to the audience at a talk I attended earlier this year.  It seemed the joke was on us for attending an event entitled ‘Ocean Junkyard’.  I was at the Edinburgh International Science Festival to hear about the work of marine scientists and conservation organisations on the topic of marine pollution.

The speakers highlighted how widespread the problem of plastic pollution has become in the oceans.

A sperm whale that recently washed up off the North Sea coast of the German state Schleswig-Holstein contained car parts and a 13m shrimp fishing net in its stomach.  One of the most shocking facts of the evening was that 90% of all fish now contain some form of plastic.  It’s predicted that by 2050 all fish will have plastic inside them and there will be more plastic in the sea by weight than fish.  There are 5 trillion pieces of plastic waste in the oceans. I subsequently read in a report launched in January 2016 by the Ellen McArthur Foundation, that 8 million tonnes of plastic leaks into the oceans every year.  This equates to dumping one garbage truck of plastic into the oceans every minute.  By 2050 it will be four trucks of waste per minute if nothing changes.

Remains of an albatross chick having been fed plastic marine debris by its parents, Pacific Ocean. By Chris Jordan (via U.S. Fish and Wildlife Service Headquarters) Creative Commons

The problems affecting the coastlines featured heavily during the talks. A lot of the litter on Scottish shores comes from people flushing inappropriate items down toilets.  Sanitary products, cotton buds and wet wipes are common on beaches and come, primarily, from flushing.  The shores of the Forth have a particular problem with this kind of pollution.  A Marine Conservation Society speaker had considerately brought along a sample of items he had collected on Cramond beach that very morning.  He offered audience members the opportunity to delve into the resulting ‘lucky dip’ bag.  Fortunately, he had encased each offending item in a transparent plastic bag!  The problem is so bad that the Marine Conservation Society (MCS) is running a ‘3 P’s’ awareness raising campaign. It stresses that only the three p’s should be flushed down the toilet.  I will leave you to conclude what they are… The last one is paper!  The MCS is very worried about wet wipes being flushed because these products combine with fats and grease to form ‘fatbergs’ that block drains. There are over 366,000 sewer blockages throughout the UK every year, of which between 50 % and 80% are caused by fats, oils and grease, wipes, sanitary waste and other unflushable items.

A new type of plastic waste that is becoming more and more prevalent comes in the form of nurdles.  These are lentil-sized beads that petroleum oil is turned into before being moulded into a bewildering array of plastic products by manufacturers.  Industrial plants can produce these at a rate of 500,000 per second.  Sometimes, the plants develop leaks through which nurdles escape.  Loss at sea from ships is also a source of nurdle pollution.  At sea, they can be swallowed by many kinds of marine wildlife.  Fidra, an environmental charity organisation based in East Lothian, encourages the public to report sightings to them through their website.  Fidra have developed a map of where nurdles have been found in Scotland.  It also shows companies that made a commitment to stop accidental loss of nurdles into the environment.

Plastic nurdles on the beach in Limekilns, Fife. ©Madeleine Berg/Fidra

Another type of pollution that most people are probably not even aware of includes microbeads in cosmetics and toiletries.  These tiny particles that are less than 1mm in diameter.  They are added facial scrubs, body exfoliators and even toothpaste by manufacturers because of their helpful abrasive properties.  However, the problem is that they are so small that they pass straight through sewage treatment works and end up in the sea.  There, they are mistaken as food by fish and other wildlife.  As animals consume one another up the food chain, the particles become concentrated and ultimately, they end up in the fish and seafood that people eat.  The added danger is that both mico-beads and nurdles absorb and concentrate toxins from the seawater.  This means that ultimately, people are consuming both plastic and toxins.  Micro-beads are found throughout the oceans, hemmed up along coastlines and on the most pristine looking beaches.  Concerned charities have developed an app to help check if a product contains the microbeads so that people can make informed choices when they make purchases.

A further surprising source of plastic pollution is clothing made from petroleum-based materials.  This includes fleeces, which, when washed, release plastic fibres into washing machine waste pipes at a rate of 20,000 per wash.  In ten years’ time it’s expected that washing machines will be fitted with filters as standard to trap the microfibers.  In the meantime, filters can be fitted to the waste pipe of machines by consumers after they have been bought.  From the point of view of avoiding plastic waste, natural fibres, such as wool, are the best materials for warm clothing.

Gibraltar has recently banned the mass release of helium balloons during its national day. In Scotland, some local authorities have done so too.  Balloons can be swallowed by animals such as turtles, fish and birds.  Inside stomachs, the balloons block animals’ ability to take in, and digest food.  The animals can starve to death as a result.  Animals also become entangled in the strings that are often attached to balloons.

An architect from Rotterdam has created floating nature reserves from re-moulded plastic originally found in the harbour there.  He hopes the islands will show people that plastic, once thrown away, doesn’t stop existing.  It just goes somewhere else, into somebody else’s back yard, whether that is the wider ocean or the local harbour.  Sometimes that backyard is brought home to us in as real a way as possible as was the case when an SNH colleague, preparing a meal at home, gutted a fish only to find it contained a little piece of fishing net.

How will you get close to your backyard and check how it’s doing?

The Marine Conservation Society organise regular beach clean-ups around the country.  Find out here how you can help.