Species of the month – the greenshank

Andy Douse, SNH’s Senior Ornithologist, tells us about these vocal waders you might be lucky enough to spot (and hear) at this time of year in the far north of Scotland.

Back in early April, I’m sitting on a bare hillside, waiting for the early morning mist to rise and for conditions to settle for my first Breeding Bird Survey plot-count this year.  In the distance a familiar call suddenly erupts out of the silence; a sharp, plaintive ‘teu-teu-teu’ announces the presence of a breeding male greenshank.  Despite its familiarity, the call is so evocative of its moorland habitat that it never fails to excite.  Today is a good day: at least two pairs are present, both concentrated along the small burn that runs across the site, and around the boggy pool complex that dominates much of the area I have to cross.

The Flows NNR, a favourite breeding spot for the greenshank. ©Lorne Gill/SNH/2020VISION

The greenshank is a wading bird; familiar to many in winter on the estuaries and mud flats round the British coast, but in summer it is most often found in the far north: especially the Flow Country; the Lewis Peatlands and the river valleys of the North-west Highlands. Over the rest of northern Europe greenshank nest in vast forests interspersed with bogs, but here in Scotland they nest in the open boglands.  Unlike its close relative, the redshank it eschews the lowland wet meadows and coastal salt-marsh, for wilder and wetter habitats.

Arriving back in late March, the males settle back on their territories, often along waterways or over pool systems, before beginning their wildly chaotic song flights.  Long passages of repeated, double-noted phrases ring out during their exuberant, switch-back flights, as exhilarating to watch as it must be to engage in.  Once a territory is established the female lays four eggs and incubation starts.  Often sited on drier ground, sometimes in the same scoop used in previous years, and invariably next to a rock or a pine stick, the nests are none-the-less hard to find, partly due their impeccable plumage camouflage which renders them almost invisible against the grey-brown vegetation. 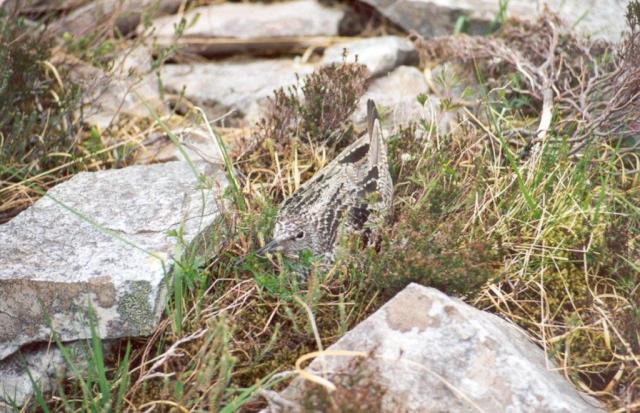 A well-camouflaged greenshank on its nest. ©Paul Robertson

Once hatched, the attentive parents lead the chicks to a nearby water body, which may mean travelling up to two kilometres in a day, no mean feat for a small chick just out of the nest.  On reaching their feeding habitat, the adults and chicks feed on invertebrates – diving beetles, dragon-fly nymphs or the occasional amphibian.  The chicks grow fast, and by early July are almost ready to fly. By then the females have left the family territory and begun their return migration.  Males stay much longer, often lasting until the latter part of July, followed lastly by the juveniles.  Some will stay in Britain but many will move further south, into France, Spain and as far south as tropical West Africa.

To find out more, look no further than Desmond and Maimie Nethersole-Thompson’s book on the greenshank, surely one of the very best of the Poyser monographs.

You can hear the greenshank’s call and find out more about it on the RSPB’s web page.