Artist in residence at Taynish NNR

We are delighted to announce that award-winning artist Jane Smith has been appointed as Artist in Residence for Taynish National Nature Reserve until March 2017.

Jane has travelled the world making wildlife films for both the BBC Natural History Unit and National Geographic, and has now settled on the west coast of Scotland where she uses painting and print-making to express her thoughts about the natural world.

Through a series of unique events over her residency, she will share her knowledge of the Taynish wildlife and unobserved dramas which happen every day that are the driving force which sustains the ecosystem of Taynish NNR.

This Monday, 4 July, Jane is running a drop-in workshop as part of the Discover Minibeasts@Taynish Mill event.

“This oakwood reserve produces a fantastic quantity and variety of insects, which provides food (or bush tucker) for the many birds which travel here from Africa every year. We are challenging people to join us at the reserve to find out more about the variety of butterflies, dragonflies, beetles and other insects which live here. No insects will be harmed in the making of this event!” says Jane.

There will be an opportunity to use microscopes for a bug’s-eye view, and to have a go at drawing the mini beasts. There will be shelter from the weather and all ages are welcome.

Art at the Mill, Taynish NNR

On top of this, the 2016 art trail along the Mill Trail features 20 pieces by 14 contributing artists. The work ranges from willow sculpture, mosaic, glass and painting to a specially constructed labyrinth. 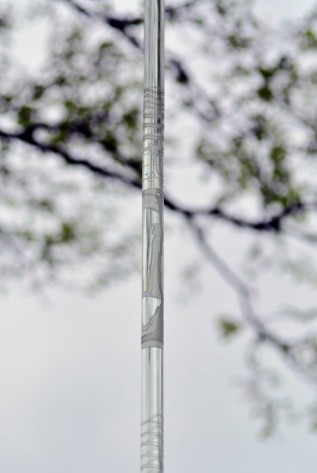 Among the featured artists are Lesley Burr who has created two mosaic pieces and an exquisite ceramic treehouse; Louise Oppenheimer whose intricate woven designs are inspired by the colours and textures visible at Taynish NNR; Margaret Ker who created the labyrinth and a beautifully constructed birds nest which both represent the unity and wholeness of nature and celebrate the rebirth of the seasons; and Karen Liversedge who has created an etched glass rod inspired by Fibonacci’s proportions within nature and antiquity. 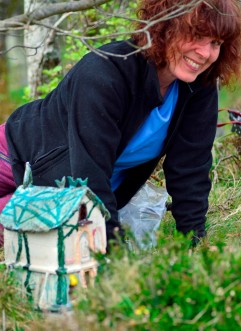 Lesley Burr with her ceramic treehouse.

Meanwhile over in Moine Mhor, artist Lesley Burrr and Madeleine Conn from Kilmartin Museum have been working closely with local primary and secondary schools over the winter to create beautiful ceramic tiles and houses which can now be seen round the Tileworks Nature Trail on the Moine Mhor NNR.

The appropriately named Tileworks Nature Trail on the North Moss (near the former Tileworks Cottage) has a very interesting link to the cultural heritage of the Moine Mhor.

In 1794, construction work started on the Crinan Canal. The canal opened in 1801 which allowed for the import of coal from Glasgow reducing the local population’s reliance on peat cutting and enabled them to improve the land.

The expanding local estate needed food for the household and for the new village of Kilmartin, built to house estate workers. The estate set up a tile works and used local clay to make roof tiles, bricks for buildings and pipes that were used to drain the bog.

Parts of the bog were cut to fuel the tile works and the remains of the peat drying sheds and the clay pits can still be seen near the boundary of the Reserve.

Using the themes of absence and presence of the people who lived and worked in the area as well as the extraordinary diversity of plants and animals that live in this very special habitat as their inspiration, the pupils have created some very special artworks.

For further information about the Tile Trail please contact caroline.anderson@snh.gov.uk

You can see more of Jane’s work on her own blog.

And you can find out everything you need to visit Taynish NNR and Moine Mhor on their webpages.