Species of the month – the basking shark

The name says it all: Cetorhinus maximus, ‘the greatest sea monster nose’. This is the basking shark, the world’s second largest fish (up to 12 m long) and a common visitor to Scottish waters during the summer months. 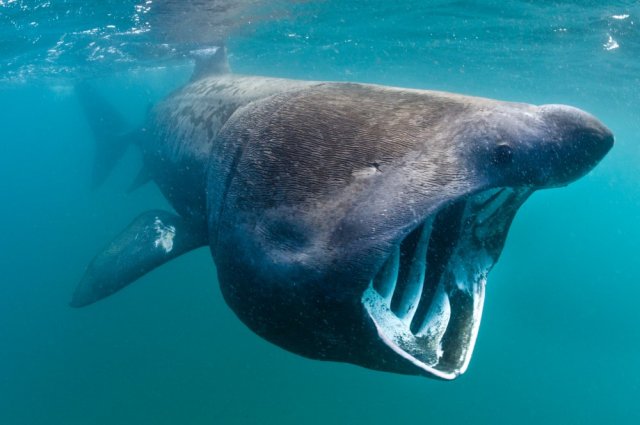 The basking shark can be easily identified by the silhouettes of the dorsal fin between the exposed tips of the ‘nose’ (actually a snout) and the caudal fin. It is often spotted very close to land, swimming lazily at about 2 knots (2.3 mph to the landlubber) just below the surface – hence its name. A body weighing over 4 tons would normally sink at such a slow speed, but buoyancy is maintained by low-density hydrocarbons in the shark’s liver, which makes up to 25% of its weight.

A basking shark swimming just below the surface of the water. ©Laurie Campbell/SNH

While the shark’s snout is not particularly big, its mouth looks truly gargantuan. While feeding, the basking shark expands its jaws to create an almost circular basket-like structure that gulps a continuous flow of seawater. Every 30 to 60 seconds or so it closes its mouth, expelling water through the gills while retaining the planktonic organisms that comprise its diet. Through this filter-feeding process, it can strain up to 2000 tons of water per hour, a volume that would almost fill an Olympic-sized swimming pool.

A basking shark feeding on plankton concentrated in surface waters close to the island of Coll. ©Alex Mustard/2020VISION

It may seem paradoxical that a fish as big as the basking shark (together with the whale shark and the megamouth shark, the other filter-feeder giants) evolved to live off small crustaceans, invertebrate larvae and tiny shrimp. However, their large size may be the very reason they were able to adapt to such a diet. A big fish can travel far and store a lot of energy while pursuing prey that is patchy and seasonal. They can also filter a lot of water, and in relative peace – only the most desperate predator would try to take on a basking shark.

Despite their enormous size, very little is known about basking sharks’ life-history. Since they disappear in winter, it was believed that they moved to the bottom of the ocean either to hibernate or to search for alternative food because they couldn’t gather enough plankton. However satellite-tagging has shown that in winter sharks from North America migrate to the Southern hemisphere, in some cases all the way to the coast of South America. While they are in tropical regions they descend to deep waters and so are not noticed by humans.

A basking shark fitted with a transmitter. ©Laurie Campbell/SNH

And distances are not a problem for the basking shark: one female tagged off the Isle of Man was later detected near Newfoundland, Canada, nearly 6,000 miles away. During this journey, the shark reached depths of 0.8 miles. Such observations, together with genetic studies, suggest the basking shark belongs to a single global population, a conclusion with conservation implications since the species is not protected everywhere.

We may be impressed by the capabilities of sophisticated nuclear submarines; but they are small fry when compared to the stamina and range of our gentle ‘greatest sea monster’.

More information about the basking shark: