Argyll is a wet place. It rains a lot here. But the water shapes the land and makes it what it is. Only the westernmost sliver of Europe is this wet, and there are plants here that only live on this Atlantic fringe, amongst the fairytale green woods, bogs, burns and rocky coasts. 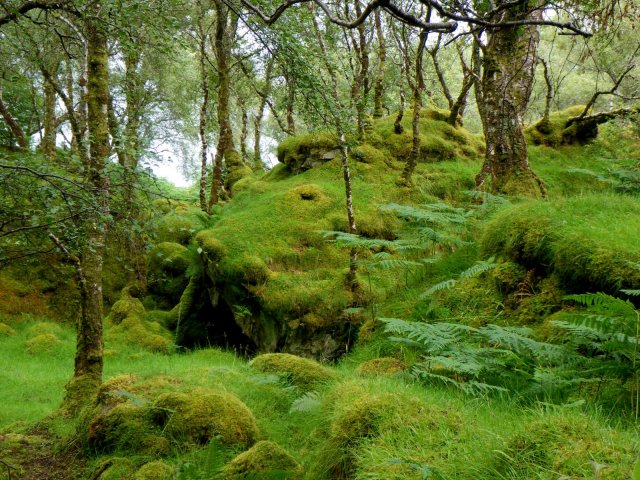 Walk into a west coast rainforest like Taynish National Nature Reserve and you be struck by the how green everything is. Not just the ground or the canopy, but everything in between, too. The trunks, branches and almost any other parts of the trees are covered in small green plants which give the place its special feel.

If you’ve been to these woods before, you’ll have noticed this greenery. But did you ever go and have a closer look at these small plants?

It would be tempting to think that this green covering is just a homogenous carpet of something common. But actually, Taynish has about 300 types of these plants growing over just about everything in these woods. Of course, they are mosses and liverworts. And these west coast woods are one of the richest places in the world for them, with many species that are rare, or absent, in the rest of Europe. 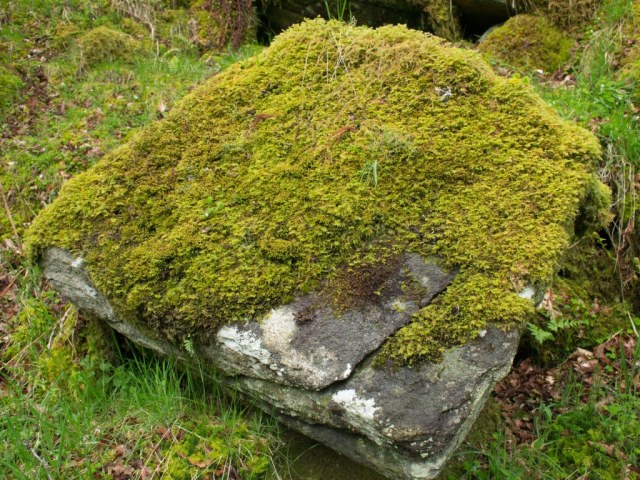 At first glance you might notice a scuzz of browny colouration on the bark or rock, in amongst the greenery of other species. Getting closer you’ll notice some branching and, if you have good eyesight, or even a magnifying glass, you might even be able to make out some roundish leaves, thus indicating that we are actually looking at a plant of some kind!

The surprising structural complexity found on this small plant is typical of a range of liverworts, but doesn’t stop there, however. If you are lucky enough to be able to whip out a botanist’s hand lens, in order to magnify the view further, you’ll see even more surprises.

Turn over the tiny plant and under the hand lens you’ll see those round leaves have smaller lobes, tucked in underneath. Then, running down the stem on the underside is yet another set of leaves, called ‘under-leaves’, appropriately enough! 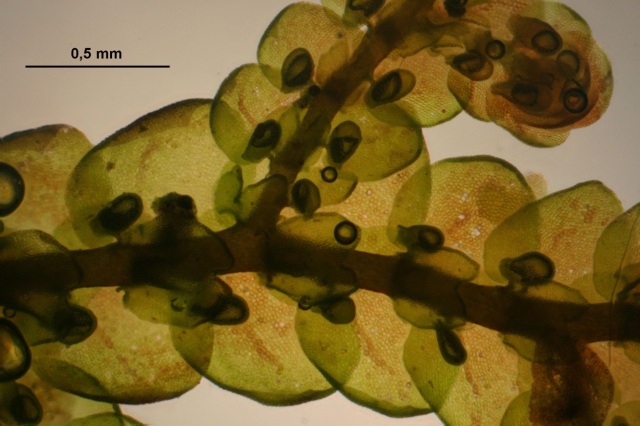 And, back on the main leaves, you might be able to make out what looks like a vein running down the middle of the leaf. Actually, none of these mosses or liverworts have veins – what you might be able to see is just a row of darker-coloured cells. These are important features for telling similar species apart.

All this on a tiny plant you can barely distinguish with the naked eye. And that’s just one of the species – now go check out the other 299!

But if you find going into the woods and looking at these plants on your own too daunting, then come along to an event Plantlife Scotland, Kilmartin Museum and Scottish Natural Heritage are having at Taynish on Sunday 15 May. Stan Phillips from SNH will be leading an excursion into Taynish’s woods looking at these special plants, and the event will be ideal for beginners, or anyone just wanting to explore the incredible biodiversity to be found in these woods. Hand lenses will be supplied!

For more information about the event, or to book a place (booking is free, but essential) then click here.

Find out more about the celtic rainforest here.