Sailing in the wake of Hugh Miller – Part 2

Elizabeth Pickett, geologist and illustrator, continues the account of her trip around the Argyll islands on the Brixham sailing trawler, Leader, along with a crew of other geologists, artists, ecologists, musicians and storytellers. The second half of the cruise heads off through the Gulf of Corryvreckan.

23 June
Through the Corryvreckan

We take a window of opportunity and motor through the Gulf of Corryvreckan towards Colonsay and Oronsay. The sea is calm but seething patches of water hint at the whirlpool that churns when the tide rips through. On either side are vivid green hillsides of layered rocks. The Paps of Jura, blue-purple and sun-tinged, rise to the south. Landing on Oronsay we head inland from a white beach to explore the ruins of the 14th-century priory. Corncrakes rasp and medieval priors stare out from carved grave-slabs. We find one of the Mesolithic shell middens for which Oronsay is famous. Packed limpet shells tell of people’s lives 6,000 years ago, as close in time to the end of the last glaciation as to today. The turquoise waters tempt some of us in for a breathtaking swim! 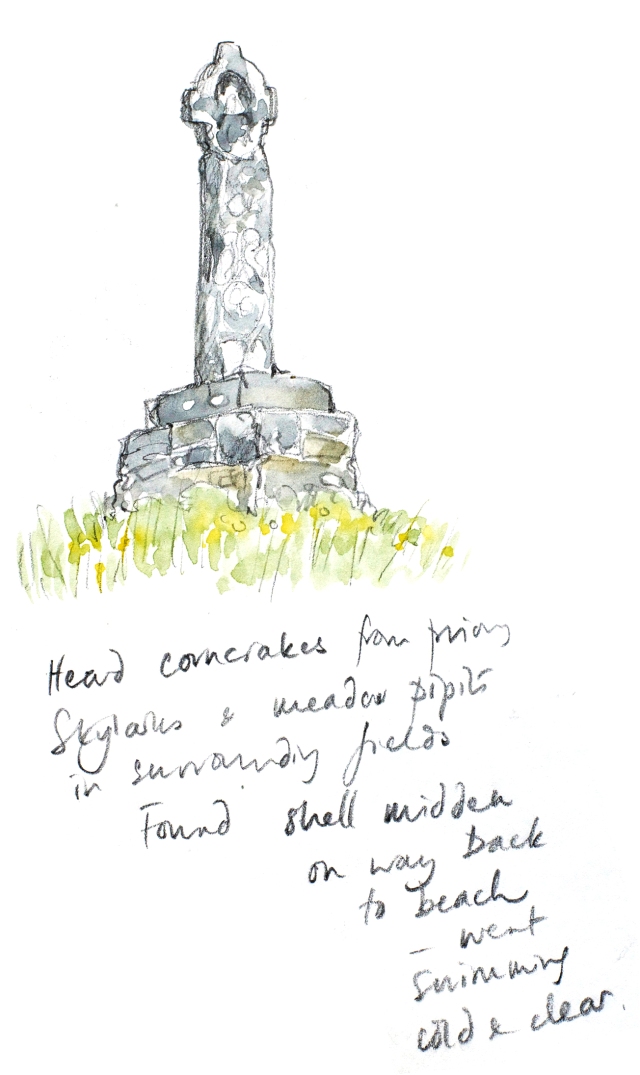 24 June
Rock of the saints

The thin rugged spine of the Garvellachs is our much-anticipated destination today. We arrive at Eileach an Naoimh and step ashore by a sea-washed outcrop of Port Askaig Tillite. We learn of the ancient glaciation, around 650 million years ago, that formed this famous rock, and contemplate ‘Snowball Earth’. These small islands seem remote now, but were once an important centre of early Christianity. St Brendan founded a monastery here in AD 542 and St Columba reputedly visited the islands. We explore the monastery ruins, the grave of Eithne (St Columba’s mother), and two amazing beehive cells. A stump of lichen-crusted rock is known as ‘Columba’s pulpit’. A spring near our landing place is still called the Holy Stream. 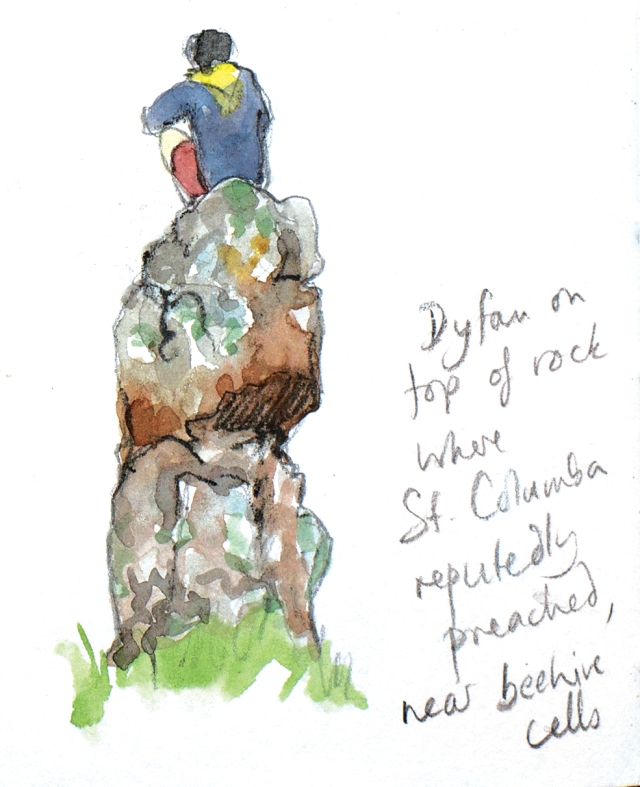 Luing welcomes us for the final part of our voyage. We walk round Cuan Point, past red cattle and over drifts of grey slate. It has a rippled sheen and is flecked with gold pyrite cubes. To our left, rear cliffs of Easdale Slate, sculpted by past quarrying. We are faced by a great wall of rock, a dyke, which chops through the slate and heads out into the green sea like a dark path. In the evening we join a ceilidh in the new Atlantic Islands Centre, which celebrates the natural and cultural heritage of the Argyll islands. Our leaders, Joyce Gilbert and Simon Cuthbert, speak about the voyage and we enjoy songs, poems, music and stories from islanders and Leader crew. It is a special end to a memorable journey. 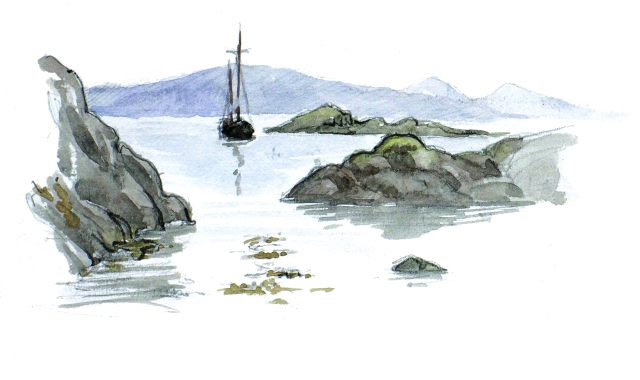 Coming ashore at the Holy Stream.

We head back to Oban past the dark cliffs of Seil and Easdale, veiled in rain and mist. Islands merge into a watercolour of slate, sea and sky. Back on the North Pier we say our goodbyes. We have heaved ropes, looked at rocks, sung songs, shared stories, written, sketched and much more – in short, we had an inspiring week. We have read some of the signs inscribed on Hugh Miller’s vast tablet of nature, and on this journey these certainly became ‘poetry in the mind’ for all of us. But this isn’t the end of the project.

Future initiatives are being discussed. Watch this space!

The voyage was run by the Scottish Geodiversity Forum, the Isle of Luing Community Trust and the Friends of Hugh Miller. If you’d like to find out more about the voyage or Hugh Miller see Emma MacLachlan’s film, Hugh’s News 26 in: www.thefriendsofhughmiller.org.uk and www.atlanticislandscentre.com