The familiar and unpretentious bird’s-foot-trefoil (Lotus corniculatus) seems to be spread all over the Scottish landscape; it is found on grasslands, meadows, rock ledges, sand dunes, derelict sites and roadside verges. This perennial herb, member of the legume family (Fabaceae, which includes peas, vetches, broad beans and clovers) is valued in many countries as pasture, hay, and silage, although it has become an invasive species in some parts of North America and Australia. 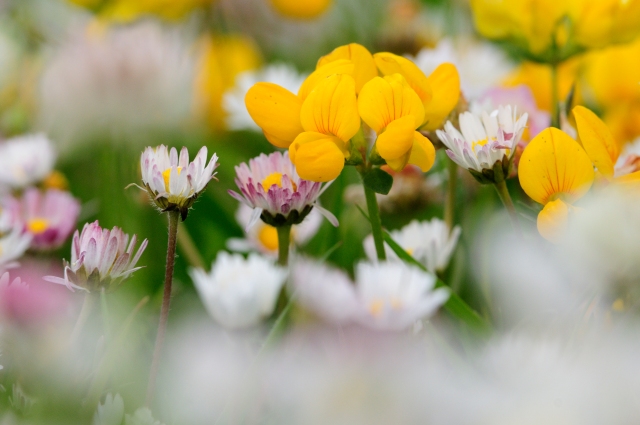 However, it is not advantageous for the plant to make its pollen available to all that want it; pollen grains, which are full of proteins, amino-acids and vitamins, require quite a lot of energy to produce. To restrict pollen access to those insects more likely to act as pollinators, the bird’s-foot-trefoil and its relatives evolved a special type of flower. It has an irregular corolla with two lateral petals and two lower ones, which are united at their edges to form a landing platform.

This video demonstrates this well https://youtu.be/fxjXjSvwM5E

As you can see in the film, a pine-wood mason bee (Osmia uncinata) has to alight on a flower’s platform and prise open the lateral petals to get access to the pollen inside. The bee’s intention is to take all pollen to its nest and store it as food for the larvae, but some grains will become attached to the bee’s underside and released in the next flower visited, ensuring pollination.

Only some insect species, mostly solitary bees and bumble bees, are able to deal with the complex flower morphology of legumes. As a consequence, some bees became highly specialized on these plants; in fact, the decline of several bumble bee species has been linked to the reduced availability of clover, bird’s-foot-trefoil and other legumes. In Scotland, three of our scarcest bee species are believed to be completely dependent on bird’s-foot-trefoil’s pollen; the pine-wood mason bee, the mountain mason bee (Osmia inermis) and the wall mason bee (Osmia parietina). 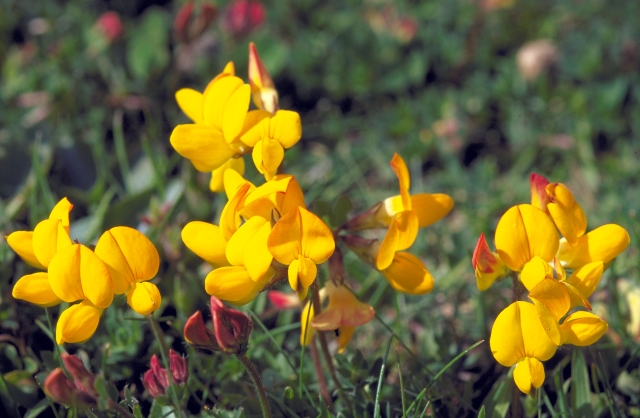 Because of its ability to grow almost anywhere, the bird’s foot trefoil can be seen as a weed when it thrives in lawns, grass verges, gardens and other places where it is not wanted. But before you reach out for the bottle of weed killer, have a thought about the importance of this plant for our bees and other insects.