Eelgrasses – flowers beneath the tide

Eelgrasses (Zostera species) are amongst the very few flowering plants that live in seawater. Two (or possibly three) species grow around Scotland. They form beautiful underwater meadows that are havens for marine wildlife, and nursery areas for commercially important species, including plaice and flounder, so they are another of our special conservation priorities in Scotland.

Eelgrasses belong to a group of plants known as seagrasses. Although they look grass-like, they are probably more closely related to the freshwater pondweeds. As well as the large species of eelgrass (Zostera marina), two smaller varieties have been recognised in the past: narrow-leaved eelgrass (Z. angustifolia) and dwarf eelgrass (Z. noltei).  The latest classifications group Z. marina and Z. angustifolia as a single species (Z. marina). The rather similar tasselweeds (Ruppia species) also grow in brackish ditches and pools, but belong to a completely different family.

Where do they grow?

Eelgrasses grow on sheltered gravelly, sandy or muddy seabeds, or with maerl, from areas exposed at the lowest tides down to depths of about 4 metres. They often inhabit places with a gentle tidal current. They can grow in full-strength seawater, or in brackish lagoons and lochans where the seawater is diluted with freshwater.

Why are they vulnerable?

In the 1930s, almost 90% of the eelgrasses around Britain died from a wasting disease, which may have been caused by a fungus. Eelgrasses grow best in undisturbed, clean water, and high levels of nitrates (from urban wastewater or farm run-off) have been linked to declines in Zostera in a number of sites around Scotland. .

A stalked jellyfish on seagrass in Loch Gairloch

Why are they important?

Many different fish live amongst the beds of eelgrass, sheltering between the swaying leaves of the plants to escape detection

Several species of flatfish use eelgrass beds as nursery areas, to lay their eggs and shelter their newly hatched young. These may include commercially important species like plaice and flounder. Eelgrasses are also important food for wildfowl, such as wigeon, in estuaries.

Many small invertebrates, particularly sea firs and sea squirts, attach to the leaves of eelgrass, while burrowing anemones, bivalve molluscs and burrowing urchins lie buried in the sand beneath. Some rare seaweeds lie unattached between the plants, and native oysters, once common in Scotland but now very rare, grow in some eelgrass beds. The roots of eelgrass bind the sand, helping to prevent erosion of the seabed. 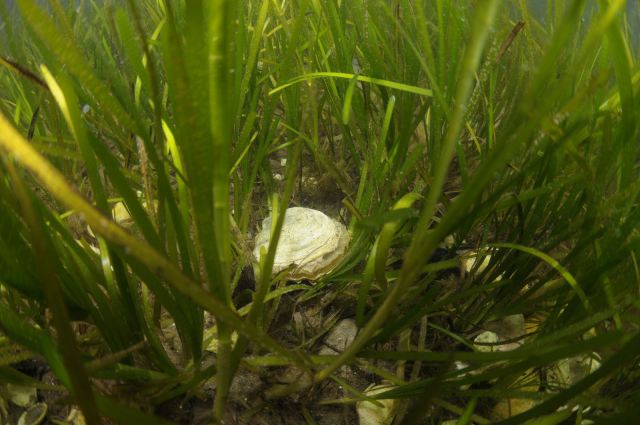 For all these reasons, it is critically important for us to protect eelgrass beds. That means keeping them free of trampling and dredging, and from coastal development close to where they grow. We also need to ensure that the waters in which they grow remain clean and unpolluted, and to protect their habitat from non-native invasive species, such as cord-grasses (Spartina species). Seagrass beds are a Priority Marine Feature (PMF) in Scottish waters and are a designated feature of nature conservation interest within a number of our Marine Protected Areas.