Snow: never enough, except when there’s too much ?

Today’s guest blog is courtesy of Dr Martin Kirkbride of the University of Dundee and reproduces an article that was first published in The Geographer (The newsletter of the Royal Scottish Geographical Society).  The subject is rather topical – snow.

The snow covered mountains of the Cairngorms National Park.

Many of us look forward to the first winter snowfall, but soon find that snow becomes a nuisance, even a problem: that’s the fickle nature of snow in Scotland, and our relationship with it. Snow is both a resource and a hazard. The more severe winters of the 1960s and 1970s helped the growth of commercial skiing, which in good years now provides revenue of £20 million to the Highland economy outside the main tourist season.

The flip side of the natural resource coin is the natural hazard. Snow presents the greatest danger when it accumulates on moderately steep slopes to depths which avalanche. A trend to windy winters, with heavy snowfalls interspersed with thaws, is a recipe for increased avalanche activity, and recent winters have seen some large avalanches releasing across hundreds of metres of slope. While the visibility of avalanches has become greater due to online reporting and photography (notably by the Scottish Avalanche Service), trends in winter climate are consistent with conditions favouring full-depth spring avalanches. 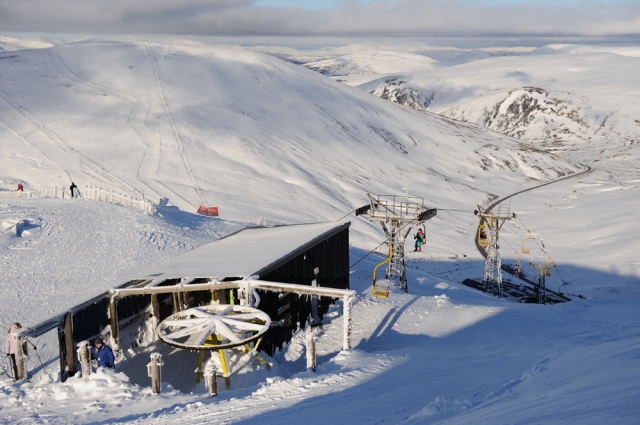 In a world where projections of warmer climate pervade so much thinking, it is unsurprising that much has been written about declining snow cover in Scotland, not least the likely demise of the ski industry. The chief government advisor with the Met Office has predicted the collapse of the Scottish ski industry by 2060. While current winters in the mountains may not see the deep long-lasting snowfields of past decades, they are now characterised by stormy winters of heavy snowfalls interspersed with midwinter thaws. Snow-lie and snow-depth statistics may not be recording that, while plenty of snow still falls, it doesn’t accumulate throughout a whole winter to depths seen in the past, and therefore snow-free mountainsides appear earlier in the spring. Downhill skiing depends on reliable winter snow cover above 600 metres. Snowfalls below this altitude commonly block the higher roads in the north-east, and occasionally even motorways in the Central Belt but tend not to lie for as long as before. 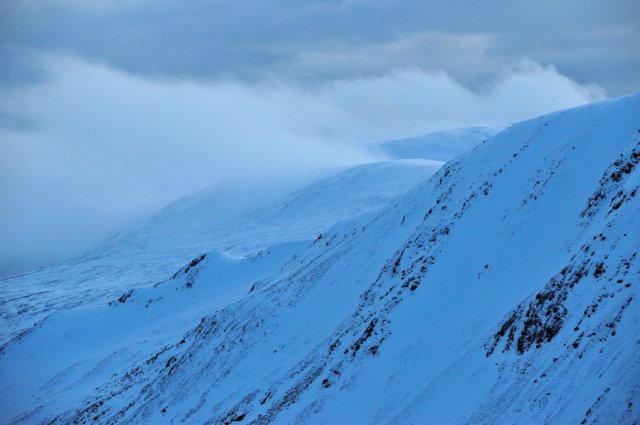 Snow covered hills at Glenshee in the Cairngorm National Park.

Climate records over recent decades show that, while winters have become warmer, precipitation has also increased. This pattern holds for both western and eastern Scotland, especially for January and February. Data since 1927 for the number of days with snow lying at Braemar show much variability between years, with a marked three- to five-year cycle between winters with less than 40 snow-lie days and those with over 70. A recent decline in snow-lie on valley floors may not be consistently mirrored in higher corries. The ski industry has been accused of climate change ‘denial’ for taking a professionally optimistic stance on its future. Yet the data on recent and projected climate change in the Highlands cannot be interpreted so simply. Indeed, both the climate trends and the ski industry’s adaptation to the nature of the local snow climate will determine the industry’s resilience.

We need to apply some basic geography to these trends of warmer but wetter winters. Above 600 metres, wetter generally means snowier. Combined with strong winds, deep drifts accumulate on slopes that are lee to the snow-bearing winds. The snow fences which line the hillsides of the ski centres are effective at capturing wind-blown snow and concentrating it where it is needed. So effective is the industry’s snow management that it is not uncommon, on warm spring days, to see skiers gliding down white lanes of snow on brown hillsides, sometimes as late as June. 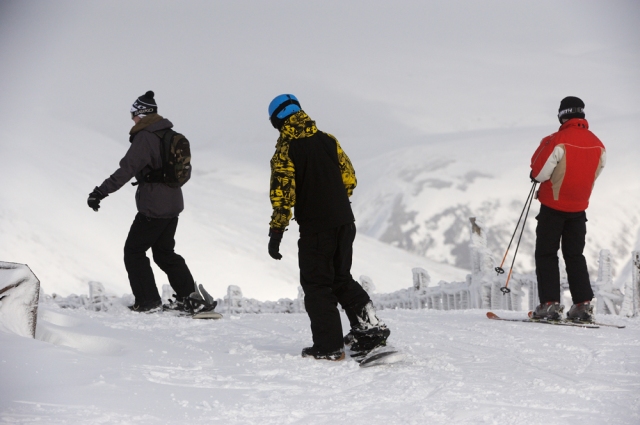 The industry has had to adapt, diversify, and reduce costs – and some centres have found ways of generating revenue in summer too. A small number of busy ski days in the Christmas, February and Easter school holidays can sustain the business over the whole year. Luck is involved in hoping that incursions of warm air masses do not thaw the snow cover just before these periods. Centres now have such a flexible cost structure that a single very profitable season, such as 2009-10, compensates for a run of poor years. The Scottish ski industry may prove to be as resilient as the skiers who brave the slopes. Paradoxically, perhaps the most predictable aspect of our snow climate will continue to be its unpredictability.

The above article is reproduced with kind permission of the RSGS, and you can find out more about their work and facilities at www.rsgs.org