Many raptors in Scotland are at risk – but many of us are also working hard to protect them. Here Vicki Mowat, a member of our Media Relations team,  looks at two ways we’re trying to make sure we keep seeing birds of prey soaring across our skies for years to come.

First off, we’re asking for your help reporting one of Britain’s rarest and most threatened birds of prey, the hen harrier.

Hen harriers are large birds of prey found mainly in moorland areas throughout Scotland. The male performs a spectacular, acrobatic courtship display which, together with the graceful and seemingly effortless flight of the birds, have earned them the nickname, ‘Sky Dancer’.

Hen harriers used to be a familiar sight on Scottish moorlands, but the latest numbers indicate there are only around 500 pairs. Illegal persecution, a loss of nesting habitat and feeding ranges, and foxes, crows and other predators eating eggs and young are all threats.

Hen harriers appear to be faring well in some areas, but declining or absent all together in others. So, working with PAW Scotland, we’re trying to develop a clearer picture of harrier numbers across the country to help us plan the work needed to improve their prospects.

Male hen harriers are distinctive, with a pale, ash-grey colour, black wing tips and a wingspan of just under a metre. Female hen harriers are slightly larger, with an owl-like face and mottled brown plumage to help camouflage them when they nest on the ground. They have obvious horizontal stripes on their tails.

Please email any sightings to us at HenHarrier@snh.gov.uk or call 07767 671973. Provide details of places where birds are seen (a six-figure grid reference is best), the time and date of the sighting and any notes on behaviour (for example hunting low, flying high up, calling or skydancing) when possible. For more information, see http://www.gov.scot/Topics/Environment/Wildlife-Habitats/paw-scotland/what-you-can-do/hen-harriers

Cliff nesting raptors – such as golden eagles and peregrines – are very vulnerable to disturbance, especially when starting nesting activity. As most Scottish golden eagles and virtually all peregrines nest on rocky crags, they are not easily disturbed. But occasionally rock climbers have accidentally disturbed nesting raptors during climbs. This may lead to nests being abandoned, eggs failing, and even chicks falling from the nest. 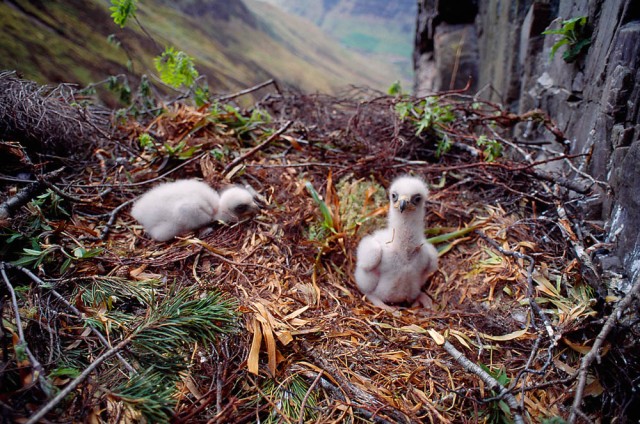 We were first made aware of nests being disturbed in Glen Doll, in the Angus Glens. But it soon became clear that these were not isolated incidents. So, along with MCofS, a new system was set up to protect cliff-nesting raptors.

MCofS already had an excellent ‘traffic light’ system on their website, which informed climbers which crags had nesting raptors and should be avoided, and which ones were safe to climb. But the system relied on up-to-date reports to be effective, and those in the ornithological field are sometimes reluctant to share information on raptors, fearing deliberate persecution or unintentional disturbance by others, such as eco-tourists.

So, we put MCofS in touch with SRSG. Now, some of the 12 regional RSGs provide MCofS with regular updates for their website, with plans for more to contribute in the future. The climbers themselves are also encouraged to report any raptor sightings to MCofS, which in turn are passed on to the SRSG to add to their records.

This simple but effective system should allow climbers to enjoy their sport, while helping raptors nest undisturbed. Climbers should check the website before they go climbing, and also change their plans if they spot nesting raptors while climbing. For more info, see www.mcofs.org.uk/nesting-bird-warning.asp