Species of the Month – corncrake

The sound of corncrakes calling on summer nights was once a feature of meadows across Scotland. But both flower-rich grasslands and corncrakes have become scarce.

For more than 40 years, Scotland has been home to almost all the corncrakes that breed in Britain. The bulk of these nest in the Hebrides, from Islay in the south to Lewis in the northwest. There are a few in the Northern Isles, mainly on Orkney. 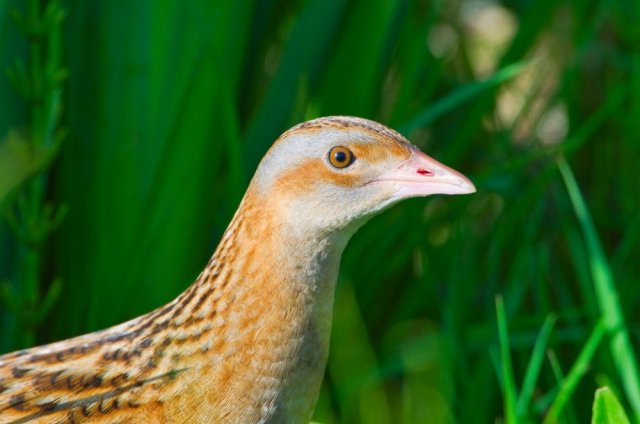 Corncrakes can turn up in other places, including in spring and autumn when birds are on migration. There are also hopes of tempting corncrakes back to some of their former haunts by looking after grasslands in ways that suit them.

Scottish hotspots for the bird are Tiree, Coll, North Uist, Benbecula and South Uist. Indeed the Hebrides is now one of the most important corncrake breeding areas in Western Europe. And the bird itself has come to symbolise some of the benefits of low-intensity farming and of cooperation between farmers – especially crofters – and conservationists to boost natural heritage.

Corncrake friendly field margins at Totronald on the Isle of Coll.

It’s much, much easier to hear a corncrake than to see one. Their ‘scritch-scritch’ call sounds like the noise you could make by scraping a stick to and fro along a comb. Male corncrakes ‘sing’ in this way at any time of day, but especially at night. So on some islands where they still breed, the noise – though typical of summer – can be a mixed blessing.

Both males and females like to stay hidden in long vegetation, including in meadows and clumps of irises or nettles. If you’re lucky enough to see one in the open, you’ll notice that a corncrake is about the size of a sleek chicken or moorhen and that much of its body is streaky buff, with strikingly chestnut wings.

Scottish corncrakes live in hayfields and other farm grasslands, crucially where the plants are high enough to hide them. That’s part of the reason why they’ve continued to survive in crofting areas. The more traditional farming methods used there have preserved both meadows and many patches of long vegetation where corncrakes can shelter or nest.

Traditional meadows, which are ungrazed in summer, can be excellent for corncrakes. They also like features such as clumps of yellow iris and nettle beds where they can lay clutches of 8 to 12 eggs.

They eat worms, snails, slugs and various insects that they pick from the ground.

It’s hard now to think that the corncrake was once one of the most widespread birds in Scotland. One indication of that is a description from the early 1800s. Back then, Lord Cockburn remembered standing at the northwest corner of Charlotte Square, in what is now the very heart of Edinburgh, and listening “to the ceaseless rural corn-craiks, nestling happily in the dewy grass.”

From Ayrshire, a couple of centuries ago or more, comes a traditional ballad that talks about courtship enjoyed by a lad and lass on ‘merry nights’ by the side of rivers and burns. “Rural joy is free tae aa,” says the song, “whaur scented clover grows/And the echo mocks the corncrake among the whinny knowes.”

Close cooperation between farmers and people keen to conserve corncrakes has been crucial to boosting corncrake numbers in Scotland. Part of this has been through crofters delaying the cutting of meadows until late summer to allow corncrakes to breed in peace.

Another step forward has been through introducing corncrake friendly methods of mowing. A farmer can help more broods to survive by starting to cut a field in the centre, then working outwards. This is because chicks have a better chance of escaping the mowing machinery if it works outwards, rather than being trapped in the middle of the field.

What to look out (or listen out) for season by season

Spring The first birds arrive back from migration in mid- to late April, with numbers building up in May. Males start calling, especially at night.

Summer Nests are built in dense vegetation and the first clutch is laid, hatching around the middle of June. Chicks soon fend for themselves, while the female mates and lays again, with her second brood hatching in late July.

Wildflowers growing in a field on the South Uist machair at Stilligarry, Loch Druidibeg.

Autumn Young corncrakes are full-grown after six to seven weeks (so the second brood chicks are full size in September). Birds leave the breeding areas and migrate southwards through Britain, France and eastern Spain.

Winter Corncrakes spend the season in Africa, south of the Sahara.

Find out more about corncrakes in our Naturally Scottish booklet. We have English and Gaelic versions for you to enjoy @ http://www.snh.gov.uk/publications-data-and-research/publications/search-the-catalogue/publication-detail/?id=29