Spring stories from Muir of Dinnet

Squirrels and slow worms have been amongst the highlights at our Muir of Dinnet National Nature Reserve lately, as Catriona Reid (the Reserve’s Manager) reports in this May update. Down by the water things have been stirring too, so, all in all, plenty of reasons to visit this fabulous nature reserve.

It is easy to understand why squirrels do well here. Most of this pinewood is naturally regenerated – these trees have seeded themselves, not been planted – and pinewoods are the stronghold of red squirrels. Interestingly red squirrels shed their ear tufts in summer- they’re probably at least, in part, there to help keep their ears warm over the winter. But none of our squirrels have shed theirs yet.

Down by the lochs, the common sandpipers continue to noisily defend their territories. In common with a lot of birds that spend a lot of time around water (like wagtails and dipper) they bob up and down a lot.

My colleague Paul also captured some gorgeous shots of a willow warbler. It had found a moth and was removing the wings before eating the nice, fat juicy body!  Meanwhile, the ducks are continuing to produce ducklings. We spotted a batch of newly-hatched ones on Parkin’s Moss. This has been a real success story for wildlife – the dams installed here over 15 years ago have now allowed the bog to become wet enough for ducks, as well as seven species of damsel and dragonfly to breed.

But the champion baby-producers right now are the geese. Over 58 goslings were on the loch this week. Here, the geese are forming them into a ‘crèche’, where a few broods young join together with their parents for protection. The partnership between the greylag and the barnacle goose has also survived! We have at least another  four greynalce (or barlag) crosses this year.

One species of reptile on the reserve has been showing well this week.  The grass cutting was somewhat delayed until we persuaded this slow worm to shift off the lawn. Fortunately it was a lot faster than normal but we still got a lovely view of it. You can see how much shinier and smoother they look compared to adders.

And, if you’re at Burn o Vat, it’s worth checking out the wild cherry or gean tree just outside the centre- it’s beautiful just now!

Find our how to get to Muir of Dinnet NNR, and more about the reserve at http://www.nnr-scotland.org.uk/muir-of-dinnet/ 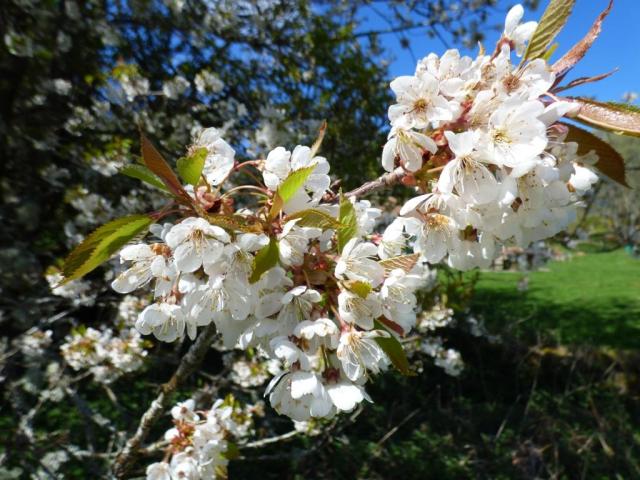