A year of walking the John Muir Way

Over this past year, my husband and I decided to walk all 134 miles of the John Muir Way – but we were in no hurry. Some people have walked or cycled the whole trail in days or weeks. But we decided we could manage it in a year. In fact, we managed it in nine months and were quite pleased with ourselves. 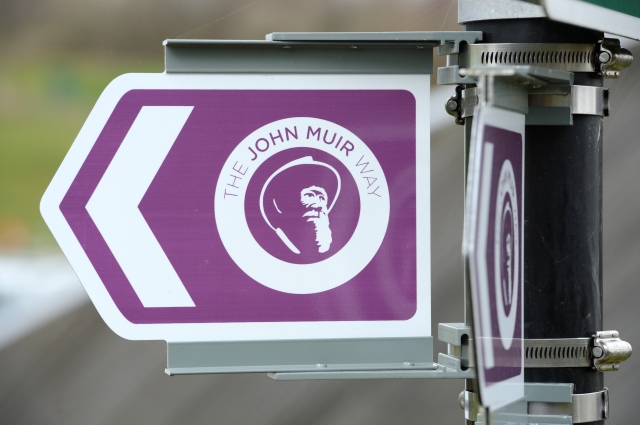 That’s the beauty of the John Muir Way: you can complete the whole thing, or not, however you like, in whatever time you have. You can walk your own local stretch every day – or do what we did and walk a different section every few weeks.

The John Muir Way, for those of you who haven’t heard of it, celebrates its first anniversary in April. It’s a coast-to-coast route which runs from Dunbar, where John Muir was born, to Helensburgh, where he left as a young boy for America. John Muir helped set up the first U.S. national parks, founded the Sierra Club, and wrote books which have inspired readers for almost 150 years.

The usual advice for the John Muir Way is to walk the trail from west to east, so the wind is behind you. But as we live in Edinburgh, we went piecemeal, guided by where it was easiest to take the train or bus. So we started off heading west from the pretty town of Dunbar, gazing at the dramatic red cliffs tumbling down to the sea.

We had so many amazing and varied highlights from there – too many to mention really, but I’ll give it a try anyway! From spotting eider ducks in North Berwick as we devoured a fish and chip reward after one of our first walks ; to wildflowers crowding East Lothian farmers’ fields; to the luck of arriving on an open day for Corstorphine Hill Tower during our Edinburgh walk for an amazing 360-degree view; to wafting along the lovely River Almond in Cramond; to enjoying spooky Blackness Castle and elegant Linlithgow Castle; to wandering among the magical woods in Callendar Park in Falkirk; to staring way up at the two Forth Road bridges and the Falkirk Wheel – who ever tires of that?; and all this, interspersed with wanders along the Union, Forth and Clyde Canals.

The most special part of the walk for us, though, was early this year when we had built up our fitness enough to tackle three days at the end of the Way in a row, staying at bed & breakfasts as we went. We walked about 40 miles from Kirkintilloch to Helensburgh, through snow, ice and sun – but with completely dry skies – and we’re now thoroughly hooked on long-distance walking. 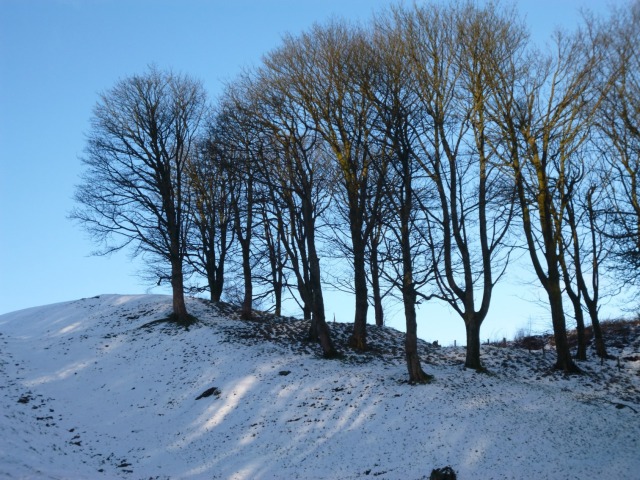 The snowy slopes of Barr Hill

One of our first sights was the Roman Fort at Bar Hill. We struggled up a snowy hill for a great view, then clambered down, making our way along the canal and roads, with the Campsie Fells surrounding us. Joining part of the West Highland Way for a several miles was a fantastic moment which made us feel like real walkers.

And the scenery just got better from there, taking in mountains, lochs, and forests. Balloch Country Park was a wonderful surprise just before we reached our second bed & breakfast at Balloch – what a lovely spot, and one we’ll definitely go back to with a picnic one day. But the scenery (and the hills) only got better on our last day, as we explored Scotland’s first national Park in the Loch Lomond area. The view from the top of Gowk Hill is breath-taking – and not just because of the steep incline to get there! Then it’s down, down, down to get to Helensburgh, where you can reward yourself with a cuppa and a nice trip to charming Hill House. 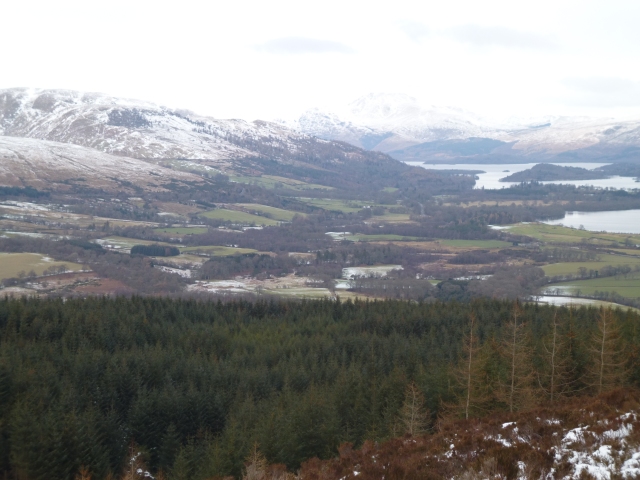 View from Gowk Hill on a hazy day – still spectacular!

So would we do it again? In a nanosecond. But we figure why not try something new first? Next up for my husband and me: St Cuthbert’s Way – a mere 62.5 miles. It should be a cakewalk compared to the grand John Muir Way.

For more on the John Muir Way, see www.johnmuirway.org. For more on Scotland’s Great Trails, see www.scotlandsgreattrails.org.uk . I also write a blog on shorter walks in Scotland and elsewhere – check it out at www.bootsandbrews.wordpress.com .

Other ways to do the Way

We’ve heard some interesting and odd tales of how people have traversed the John Muir Way over the past year. One young man walked the length of the country, including the Way, writing a sonnet a day. Another man completed the Way quickly along with his stuffed toy duck, which he photographed in different locations along the trail. And we’ve also heard from lots of US visitors, walkers and cyclists, families, couples and people of all ages complete the Way. 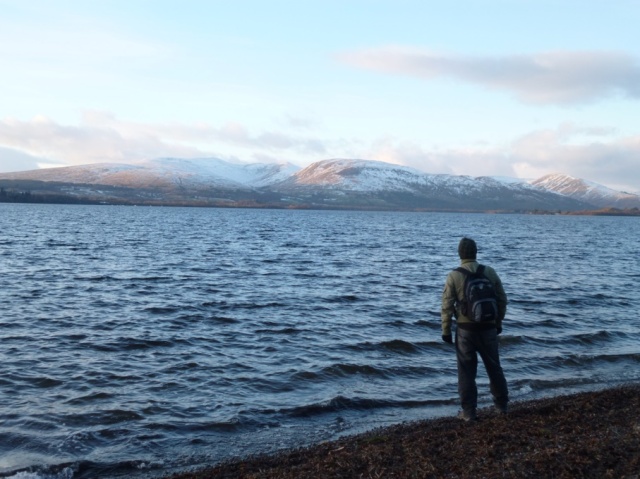 The lovely shore and view at Balloch