Species of the month – Scottish crossbill

This is Scotland’s – indeed, Britain’s – only endemic bird species: one that breeds here, and nowhere else in the world. It lives in pinewoods and conifer plantations, especially old-growth Caledonian Forest in the Highlands, as David Wood explains.

Another claim to fame, in common with other kinds of crossbill, is that the tips of the upper and lower parts of its beak are twisted. This allows a crossbill to tweak open pine cones, then poke its tongue in the small openings to extract and eat the energy-rich seeds.

Scottish crossbills are finches, and are therefore related to the more familiar siskins, chaffinches and bullfinches that grace our woodlands and gardens. And like many other members of the finch family, Scottish crossbills – especially the males – are brightly coloured. Adult males are a glorious burnished orange and like to sing and perch at the very tops of trees, in the style of Christmas decorations. Females and immatures are are more dull olive-green. The adults of both sexes have those characteristic beak twists. 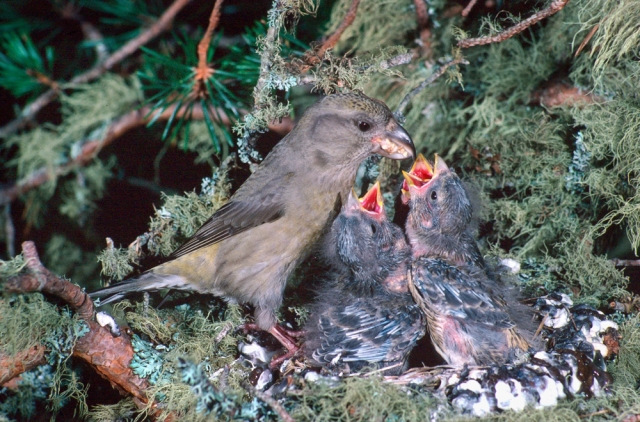 But not every Scottish finch with a crossed bill is a Scottish crossbill! Two other crossbill species occur in Scotland: the widely-distributed common crossbill, and the much rarer parrot crossbill, which is restricted to Strathspey and Deeside. All three species look extremely similar in the field, to the extent that Scottish crossbills can only reliably be identified by their distinctive ‘excitement’ call, or by detailed measurements of the bill. But a bird with a larger (but not deep) beak and a low-pitched voice, calling in an old-growth Caledonian pinewood in late winter or early spring, might just be a Scottish crossbill.

Scottish crossbills were surveyed in 2008. The method involved playing recordings of the birds’ calls, and then recording and analysing the voices of the birds that called back in response. The survey estimated that there are around 6,800 pairs of Scottish crossbills – about 20,000 individuals overall. They live in conifer woods, mainly in the east, north and centre of northern Scotland, from Caithness to Aberdeenshire, with hotspots are the pinewoods of Strathspey, Deeside and Easter Ross. There are a few records south of these areas, but, at the moment, they seem to be absent from the west Highlands. So if you see a flock of crossbills near the west coast, in the Borders or southern Scotland, you can be fairly sure that they’re not Scottish crossbills, but common crossbills. 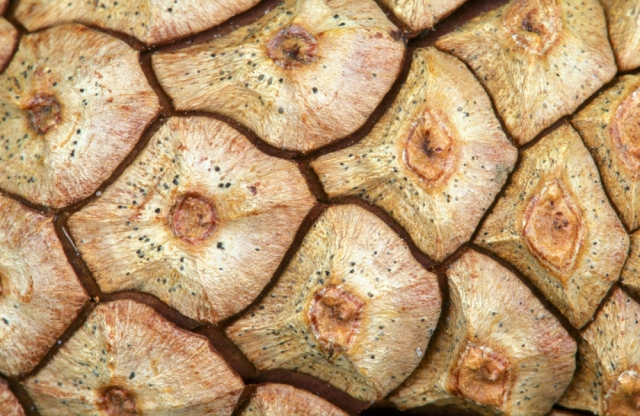 The seeds of conifers, from both Scots pine and non-native trees, support Scottish crossbills all year round. They also feed on pine and spruce shoots, as well as insects.

Caledonian pinewood is classic Scottish crossbill habitat, and the scene for many of the artworks and photographs that depict them, but these old pinewoods are not their only home: Scottish crossbills also use several other types of conifer woods, including plantations of lodgepole pine, sitka spruce and larches. That makes identifying them all the more difficult, because these are also places that are popular with common crossbills.

As with many of the creatures that have a close link to Scotland’s native pinewoods, one of the best ways to help Scottish crossbills is to make sure that their favourite habitat is in good shape. Caledonian pinewoods have been the focus of much study in recent years, to understand better the needs of the species that live there. There have also been big efforts to conserve and expand these woods, including attempts to try to get better woodland links between surviving old-growth areas. Many new woodlands have also been planted, using Scots pine, birches and other trees of the Caledonian Forest.

All these things will help the several kinds of crossbills that use conifer woods in the Highlands and Aberdeenshire. No one knows if the Scottish crossbill will one day spread beyond them to colonise other parts of its native land. What is certain is that we should be proud of this uniquely Scottish bird.

The Scottish crossbill inspired a tartan designed in the 1990s. Simply called ‘Crossbill’ and recorded in the Scottish Register of Tartans, it grew from the idea that groups of crossbills moving around their home territory were a bit like a feathered clan.

The tartan’s colours come from both the birds and the native pinewoods. Bottle-green and dark-brown symbolise Scots pine needles and trunks, while purple is for the colour of fruiting blaeberries and flowering heather. Thin stripes of orange-red and yellow show male and female crossbills in the trees.

First conceived for a visitor centre in Glenmore, the tartan was then used as a logo for the Forest of Spey and woven into scarves for the Cairngorms Partnership – the forerunner of the Cairngorms National Park Authority.

The breeding season starts early for Scottish crossbills. In winter, males start singing from the tops of conifers, and some eggs are laid as early as February. However, the typical clutch of three or four eggs is more often laid in March or April. The cock brings food to the hen while she sits to warm the eggs. When the chicks hatch in spring, they’re fed in the nest for about three weeks on a diet of husked conifer seeds.

By summertime, broods have left the nest. Families may split up at this point, with the father feeding some of the young and the mother feeding others. At first, the bills of the fledglings aren’t crossed. In autumn, birds often come together in small flocks as they roam the forests in search of suitable cones. Larger flocks will usually, however, be common crossbills.