Golden-hair lichen on the ‘enchanted isles’

Andy Acton, a noted lichenologist, is our guest blogger today.  His tale is one of golden hair and enchanted isles. Read on if adventure and a sense of discovery appeal. The rugged and remote Shiant Isles, in the Minch 6 km off the Isle of Lewis, are well known for their seabird colonies. However, until recently, the islands had never been visited by lichen specialists. The pioneering five-man team were therefore delighted when their efforts paid off and they discovered a number of rare lichens. One of these, the golden-hair lichen (Teloschistes flavicans), had not been seen in Scotland since the 1830s when it was last recorded on the gannet colony at Ailsa Craig. As its name suggests this intricately branched golden yellow lichen is usually found straggled amongst small plants or other lichens. This Shiant Isles record is the most northerly for this species in the world.

A small tuft was initially found on the ground amongst wet heath on Eilean an Taighe (House Island). This was an unusual habitat for this species and it was probably a ‘blow in’ from suitable habitat elsewhere. So the hunt was on. After several days searching it was found growing on steep maritime slopes and cliffs at two separate locations on the island to the north, Garbh Eilean (Rough Isle).

Looking across the shingle isthmus over to the steep south facing cliffs of Garbh Eilean (Rough Island) from Eilean an Taighe (House Island). Photo Andy Acton

Clean air, particularly around our western islands, is one factor that contributes to Scotland’s diverse flora of over 1500 different species. Once fairly widespread in southern Britain, golden-hair lichen underwent a dramatic decline due to its sensitivity to sulphur dioxide air pollution. It became largely restricted to a few coastal sites in south-west England and western Wales having been lost from much of the country. Sulphur dioxide gas is mainly produced by burning fossil fuels for electricity generation, industrial manufacture and domestic uses. Emissions have now declined substantially, due to legislation, decline in heavy industry and turn to cleaner sources of energy, and lichenologists have recorded substantial increases in the distribution of many lichen species. Other exciting finds included the rare maritime sea eagle’s claws lichen (Anaptychia ciliaris subsp. mamillata), and a range of seabird colony specialists that thrive on guano splattered rocks most notably the rare Arctic-maritime species Lecanora straminea, a rim lichen.

The rare maritime sea eagle’s claws lichen. This picture was taken on the even remoter St. Kilda isles on a trip in 2013 during survey work for the National Trust for Scotland. Photo Andy Acton 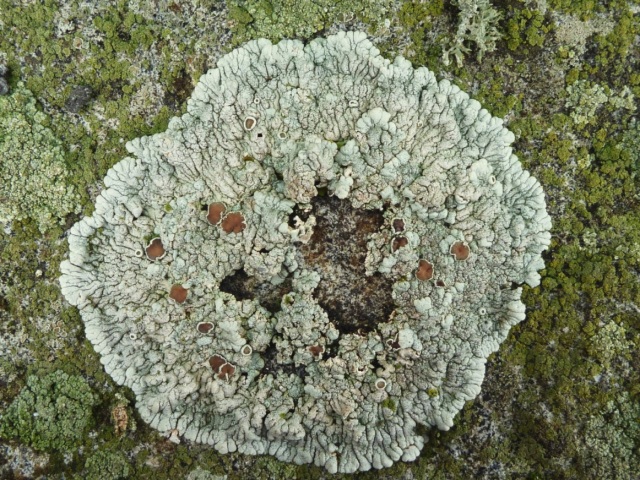 The rare Arctic-maritime species Lecanora straminea on guano-enriched rocks. The brown discs with a pale rim are the fruiting bodies. Photo Andy Acton.

These finds further highlight the importance of Scotland as a truly special place for these fascinating organisms. The British Lichen Society, who part funded this expedition, is the place to go if you are interested in learning more about lichens. The Society promotes the study and conservation of lichens throughout the world, but with a special emphasis on the British Isles www.britishlichensociety.org.uk.   We would like to thank Andy Acton for sharing this exciting trip with us for our blog.